To decouple or not to decouple these LEDs/drivers?

I am designing an aluminum PCB for some custom aquarium LEDs. I've done a lot of searching on mouser and read lots of data sheets for drivers that would suit my needs. Most of them have "typical application" example circuits, and in some of these there are 1 or 2 or no decoupling caps.

The one I settled on is the BCR421 from diodes inc, and in their example circuits there are no caps listed. I am basically following this example circuit for each of the 3 LED channels with a 24V laptop power supply and a 220uF electrolytic cap at the input of the board. 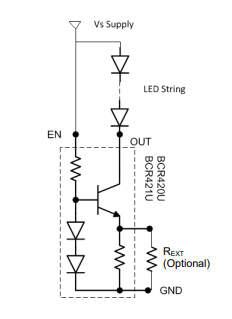 Thing is, most of the other drivers I put into (and then decided against) my schematic had at least one decoupling cap listed, such as this one which actually has two caps. Only the BCR421's data sheet is capacitor-free. 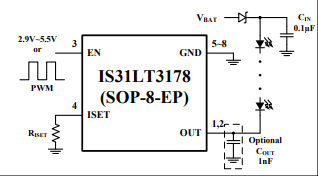 Normally I would say "just to be safe" but since this will be an aluminum PCB, every additional component means more traces on the single layer and that means I have to spread things out. Space efficiency would be ideal if I don't need the caps. So, would caps be helpful in this scenario, and if so what would you recommend and where? I have left the caps in my schematic as they have them in the second example there because I was not sure what to do once I switched drivers.

Michael WoodMichael Wood
1333 bronze badges
New contributor
Michael Wood is a new contributor to this site. Take care in asking for clarification, commenting, and answering. Check out our Code of Conduct.
\$\endgroup\$
Add a comment  |

The first device is a simple analog circuit and does not depend on supply impedance (including the need of bypass capacitors). The second one seems to have more active circuitry inside it, but also has some kind of power supply section inside which evidently handles its own stability without need for bypasses. The datasheet does not mention bypasses, so you do not need them.

Not the answer you're looking for? Browse other questions tagged led capacitor driver decoupling-capacitor or ask your own question.