I have this tricky question and I can't wrap my head around it.

There is this inductor to limit the inrush current that will be charging up a capacitor. I'm questioning the design of it, but I don't know how to calculate it.

The input voltage is 240 V AC (60 Hz), so probably the worst case is about 330 V peak when this thing is energized, and I want to treat it like a DC at that moment but I'm not good at math.

The second part is a series inductor of 1 mH and then a 22 uF capacitor that gets charged.

The questionable thing is that this inductor is only rated for 330 mA. I can't figure out if this is more than enough or not enough. Is it pretty easy to calculate this (even an approximation will be great) or is this something that is better simulated?

I had a feeling there was something wrong with this circuit. I drew a very much simplified schematic but just for reference let me include the actual thing:

Your initial question bears no resemblance to the actual design. The soft-start on the feedback will greatly reduce the stress on the components.

This is a transformer and optoisolated forward converter with negative feedback on a series low-side switching FET with a soft-start cap to limit the target voltage for a slower rise-time. This C21 could be increased for more protection margin from the ~ 3ms time constant with more than the 1uF used, but a 20W transient on a 3W cement WW resistor is possibly safe (assuming that was done with the 1mH Air Cores.

I'm not going to waste any more time on this question as it was presented poorly before the schematic with false assumptions.

For the simple answer consider series reactance and the exponential curve, time constant, T=RC and T=L/R with a step input and each part has some resistance (TBD)

What is T? then I max

If you happened to turn on the switch at peak voltage what is the impedance for a UHF spectrum of an air gap power switch turning? basically it's limited by the diode bulk resistance and ESR of the cap and DCR of L.

Above shows a 10A diode with an ideal L and C drawing 50A peak or over 20 kW for a few microseconds.

This is why I said unless you had a zero-crossing switch (ZCS) driving a Triac, your cap and switch would be severely over-stressed.

Bottom line is you cannot do this without further limiting the current.

With a ZCS switch it would look like this

The cap. would still not like it (poof) with the 1 kVAR shown in plot as 1kW surge current, so even here you need a current limiting power resistor.

Even with a 1k resistor that is rated for 10W you get a large surge peak, so often in SMPS they use NTC ICL's with a timer bypass (opt.) to raise the cold resistance. 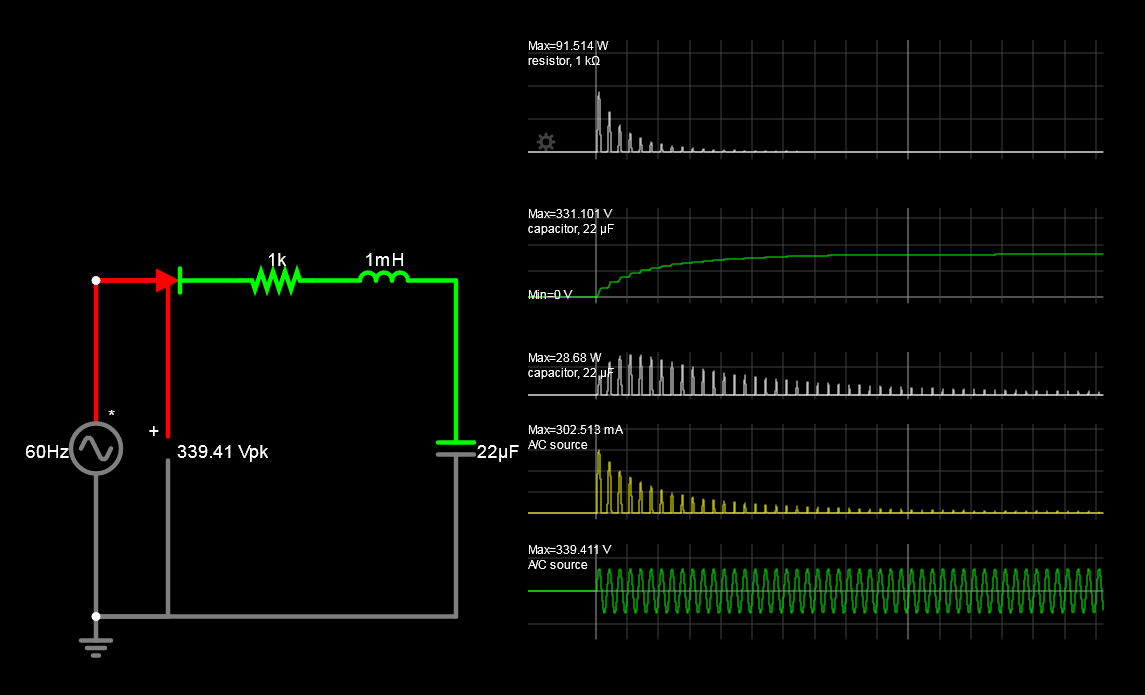 The maximum current will depend upon where in the AC cycle the power is turned on.

If the power switch is closed at the zero-crossing point of the AC cycle, or during the negative part of the cycle where the diode will not conduct, the current in the inductor will look something like this:

Of course it won't look exactly like this because components are not ideal. In fact, it may look a lot different from this because the inductor core, unless it is an air-core inductor, may saturate.

If on the other hand, the switch closes while the power is at the positive peak of the cycle, the simulated current looks like this:

The reality, again, will likely not look like this.

Not the answer you're looking for? Browse other questions tagged circuit-analysis current inductance or ask your own question.