First of all, I've had no formal training as an electrical engineer, I've taught myself everything I know online, so this may be a stupid question. That said, I've designed an active PFC circuit using discrete components that appear to work in simulation when I pre-charge the capacitors with IC=200, because I don't have a model for the NTC.

This is the PFC circuit (Updated from the original post) 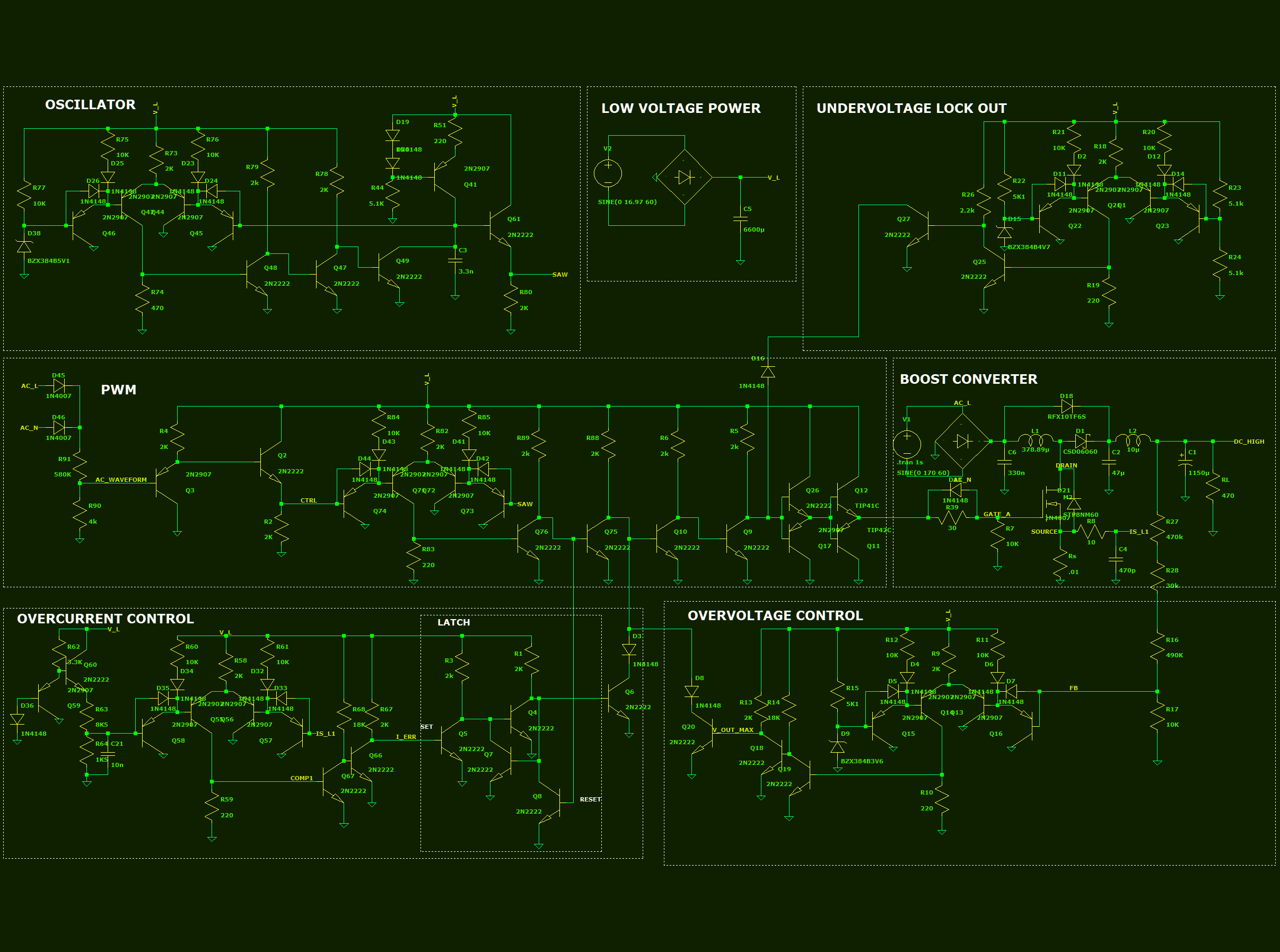 These are the waveforms (Also updated) 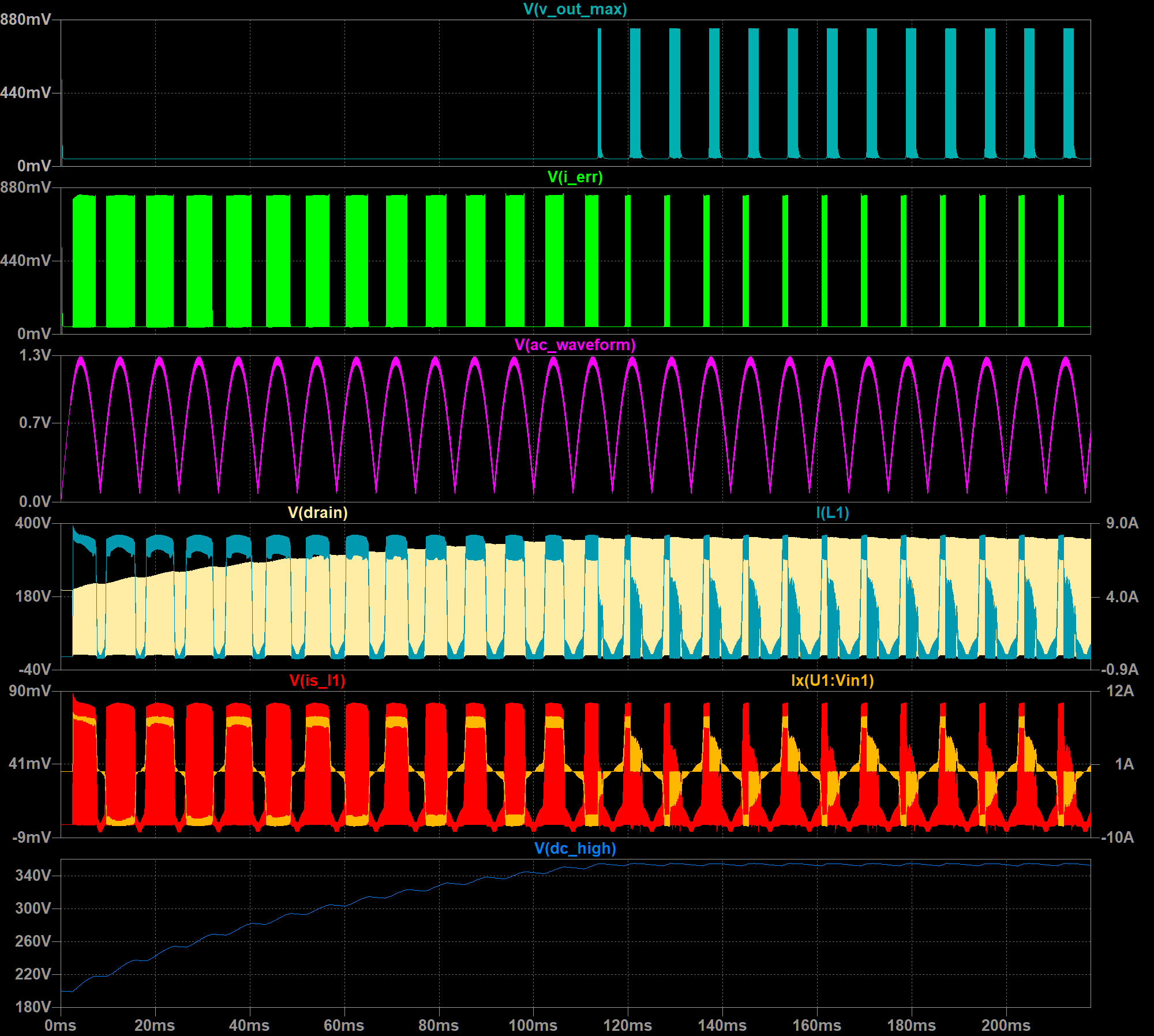 As you can see both the inductor and AC current waveforms do not look like they do in the application notes of a PFC IC. I can't seem to get them to look like they're supposed too without sacrificing the desired output voltage.

I want to build this thing for an full bridge converter that will be realized with a KA3525 using a gate drive transformer to switch the 4 MOSFETs.

From what I understand active PFC is not only to make the power companies happy (correct me if I'm wrong here), but it's also to have the correct amount of output power available to the DC-DC converter and to reduce the current stress on the DC-DC converter's MOSFETs.

I did try to use an LM339N to build the ramp generator in the oscillator section, but for some reason it was a complete fail (I don't know what it is, but I can never get those chips to work in reality).

Will this circuit (with line noise filtration and NTC in place of course) work in reality?

How can I fix the current envelope (is it necessary)?

A person after my own heart!

Here's an example from my old catalog:

Notice the hysteretic comparator (top 2N4403's square output fed back to the right side input). The entire left half of this is dedicated to current source/sink to get a symmetrical triangle waveform into the capacitor. A JFET buffer has low leakage for widest range -- this ran something like 1Hz(!) to 4.5MHz in a single range (Ct = 680pF), and up to 30-40MHz flat out (Ct=0, max Freq setting). (At a fixed frequency, probably an emitter follower will do, if any is needed at all.)

And indeed, the envelope seems to be heavily distorted, with a double-peaked shape apparently (assuming I'm not seeing just switching noise here -- simulation output can be hard to read like that).

Such behavior is usually implemented with a compensated error amp (rolling off at a few Hz, so it doesn't try to regulate against output ripple -- that ripple is necessary for the PFC to function!), with over/under voltage limits to cut off / boost the inverter operation at those extremes. It might also be implemented with a nonlinear transfer function in the error amp (low gm for low inputs say +/-100mV, 5-10x higher gm for larger inputs), so simply as error increases, control speeds up to reign it in faster. (I'm not a fan of the nonlinear amp, myself; it often leads to chaotic instability when the compensation is just a little off, making it difficult to tune in development.)

The downsides to this method are: poor compensation (typically a division function block is also used, so that the voltage error amp's output doesn't also depend on average Vin(rms) -- we want to factor that out of the multiplier, again so that it's only multiplying by the instantaneous waveform); poor operation around DCM (discontinuous conduction mode, inductor current falling to zero for part of the cycle); and whatever tradeoffs for operating frequency, component size, etc. (CCM converters need relatively large inductors, which can be affordable powdered-iron types as a result, but are fairly bulky, and not particularly low loss).

There are two other common control methods, which I will describe in order, so as to suggest an evolution between them.

One is BCM (boundary conduction mode, I_L just reaching zero every cycle). Observe that, if inductor voltage is always switched between Vin and Vin-Vout (square waved), and if current exactly returns to zero before turn-on, then average input current is exactly half the peak inductor current, and we can set turn-off by a comparator to that (i.e., a low-side sense resistor, as your R36 and related circuitry). And we can set turn-on by monitoring the inductor voltage and seeing when it falls (D1 turn off). The exact operating frequency might not be known -- it can, and indeed must, vary -- but as long as it's within a reasonable range, we don't care. This simplifies the current feedback loop, to a peak current mode control rather than an error amp. Downside: we still need the multiplier and voltage error amp. And multipliers are HARD to make, reliably and cheaply, whether in discrete or IC form. (Indeed, in ICs they often go to the trouble of digitizing the signal and using some number of bits as a crude multiplier or MDAC, it's that annoying of a problem!)

The last control makes a seemingly small adjustment to the above: what if, instead of turning off at some peak current, we turn off after some given on-time? Scary: we don't know what input current is, at all (at least, not on a cycle-to-cycle basis). This runs counter to the logic of a current-mode control: we lose the safety granted by controlling the switching current. Maybe under adverse conditions (typically startup and load-fault) it could blow up, and we need to figure out contingencies to deal with that. Well, let's see where it goes.

If we're doing some fixed on-time, then the inductor always charges with some energy proportional to supply voltage.

That means we can remove the multiplier block, doesn't it? HMMMMM.

So the circuit reduces to a voltage error amp and a one-shot timer. It oscillates by, effectively, the ping-pong between internal timer, and the one-shot effected by the inductor current falling to zero. And the latter is very easy to sense (the large signal of switch-node voltage falling below Vin; or, more often, by a sense winding on the inductor, its zero crossing).

The main downsides to this are, we still need some way to control current during startup/fault conditions (we could OR the timer with the current comparator signal), and, operation sucks at low V_in: notice the switch node will always have some capacitance on it, therefore some inductor energy is lost simply to charging that capacitance, and more is lost when the voltage swing is higher, so, in short: input current drops at low input voltage, and low output current. Thus, we expect relatively high crossover distortion (at the line input current), with poorer operation at light load. (Typical controllers of this type, use a hysteretic mode at light load, so they draw input current in bursts -- the bursts still having good power factor, though.)

This guy is... kind of crazy, in committing to build all of that. A fantastic bit of work.

Not the answer you're looking for? Browse other questions tagged components power-factor-correction or ask your own question.

11
Where are the depletion PMOS transistors?
2
ATX - replace passive PFC to active
0
PFC required in China?
3
PFC controller - How does it work?
0
Current sensing in boost PFC controllers
0
Oscillator without active components