The figures show diagrams of line signals: the first in the open-drain + pull up mode, the second push-pull + pull-down.

There are several questions:

Open-drain depends on a pullup resistor to provide the high state, while the low state is actively created by a transistor. So the pullup network has relatively high impedance to VDD and very low impedance to GND because when the transistor fully turns on, it is effectively a short to GND.

The pullup resistor (e.g. 10k) will be much slower to charge up the output node since the pullup resistor limits the rate at which the output node can be charged from low to high and that's why you see an RC type of reponse on the rising edge while the high to low transition happens much faster due to having an output transitor that pulls the line low, with pretty small impedance.

Push-pull configuration doesn't rely on a pullup resistor to create the high state, it actually uses another transistor in addition to the one used for creating the low state. So both paths to VDD and GND are low impedance when they need to be. This allows to much faster transition from low to high. 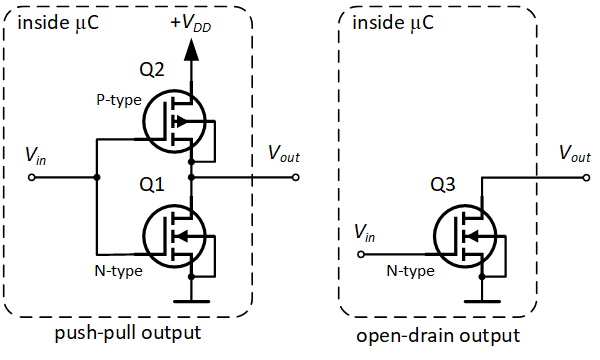 Not the answer you're looking for? Browse other questions tagged stm32 signal oscilloscope push-pull open-drain or ask your own question.

9
What's mean these microcontroller pin input/output modes?
3
Electrical difference between Push pull and open drain?
3
Confused between push-pull and open-drain
4
Eliminating MOSFET drain voltage spikes in a push pull power supply
5
Why do I2C lines use open drain driver instead of tri-state drivers?
0
connecting Open drain and Push pull outputs to drive the same pin
0
Trying to understand push-pull output mode and open-drain output mode in a MCU's GPIO pin
2
Why are n-channel MOSFETs at high-side position and p-channel MOSFETs at low-side position on many push-pull circuits?
11
Why are open-drain outputs needed?
0
Is a pull-up on open drain required when output is not used?