Is the resistive component of impedance the same as DC resistance for a given component?

In an ideal world where resistances do not depend on frequency, yes, but in the real world, no. The real part of an impedance at any non-zero frequency (the AC resistance) does not coincide with the DC resistance. The difference may be small, but it’s there.

Considering a resistor composed of a resistive material supported by an insulating material, there are several effects that contribute to this frequency dependence:

For inductances, in addition to the above effects, there is also the dissipation in the core (if not air) that contributes to the equivalent AC resistance, and this dissipation is frequency dependent.

For capacitors, the frequency dependence of the real part of the impedance depends on the losses of the dielectric material and, to a lesser extent at high frequencies, on transmission line effects at the electrodes.

No, probably not in anything other than near-ideal components. For instance, a near-ideal inductor will look like an impedance of R + XL where R is the series resistance or DC resistance. But, this near-ideal component does not suffer from eddy current losses or core saturation losses. When you factor those into the analysis you get a loss element due to those AC losses.

Also to consider is skin effect. Skin effect is sometimes called "AC resistance" and, for a given conductor, as frequency rises the electric currents start to hog the outer circumference of the wire. In other words, down the centre of a conductor (where inductance is greatest), currents prefer to travel in other parts. This reduces the usable cross sectional area of a conductor and thus, resistive losses at high frequencies increase.

You might also consider a capacitor that has an effective series resistance (ESR). You cannot measure it at DC therefore, your question doesn't apply but, as frequency rises, the capacitive reactance drops and you are left with a low value of ESR that is a loss but, you can't measure it at DC.

Not always. The real component of impedance just represents real, permanent power loss (not energy removed from the circuit and stored to be eventually released back into the circuit in the future). Resistance is not the only form of real power loss.

Losses due to eddy currents in the core of things like inductors and transformers, and motors are invisible when measured at DC since you need non zero frequencies to induce the Eddy currents to flow to produce the loss. So measuring "resistance" at DC gives you a lower reading than measuring "resistance" at different frequencies because you're actually measuring the real component of impedance rather than resistance specifically.

Similarly, capacitors don't pass DC except through leakage so "near infinite" resistance but have losses when conducting AC so have a real impedance component that is much lower than infinite.

Is the resistive component of impedance the same as DC resistance for a given component?

In general NO, but YES for Conductors, e.g. Inductors always DC resistance in datasheets as DCR.

For Insulators, (i.e. ≡ dielectric) that are supposed to block DC, there is parallel leakage resistance that does pass current at max rated Vdc.

There are 3 fundamental fixed electrical passive components, R, L, and C, from which we can model the reality of each physical part. 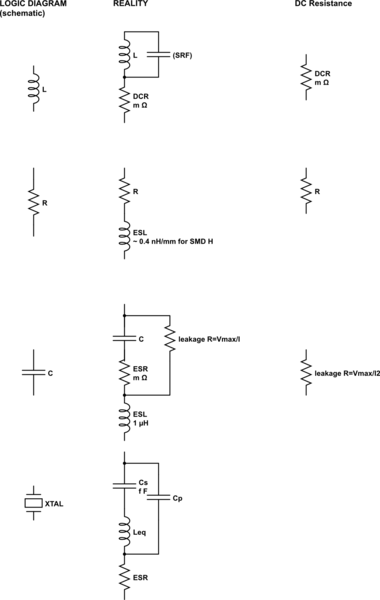 An RF Inductor always has a DCR, L, and C value that is reported by the Parallel Resonant Frequency (PRF) but more commonly as SRF for "Self Resonant Frequency" because the insulation between each turn causes the impedance at f for L and C to be equal and cancel.

The same is true for RF Caps with the SRF for parts when this is important, but at resonance, the impedances of L & C cancel leaving a notch at ESR.

Not the answer you're looking for? Browse other questions tagged resistance impedance or ask your own question.