I am looking for an optocoupler that can sustain a 400kHz signal. Now the question is how can I find out from a datasheet whether it does?

and a cut-off frequency of 80kHz.

Or is there another factor that affects the viability of the optocoupler?

Can you recommend some common and fast enough optocouplers for this speed?

You should read datasheets with a bit of a jaundiced 1 eye.

The "typical" response times are valid iff you have a load resistor of 100 ohms. That is rarely true in a typical application since the voltage you could reliably expect to see across a 100 ohm load would be rather small.

If you want to have (say) a 4.7k ohm load resistor, then the rise and fall times will be much longer, more like 50 to 70μs (typical, at 25°C, and without saturating the transistor). 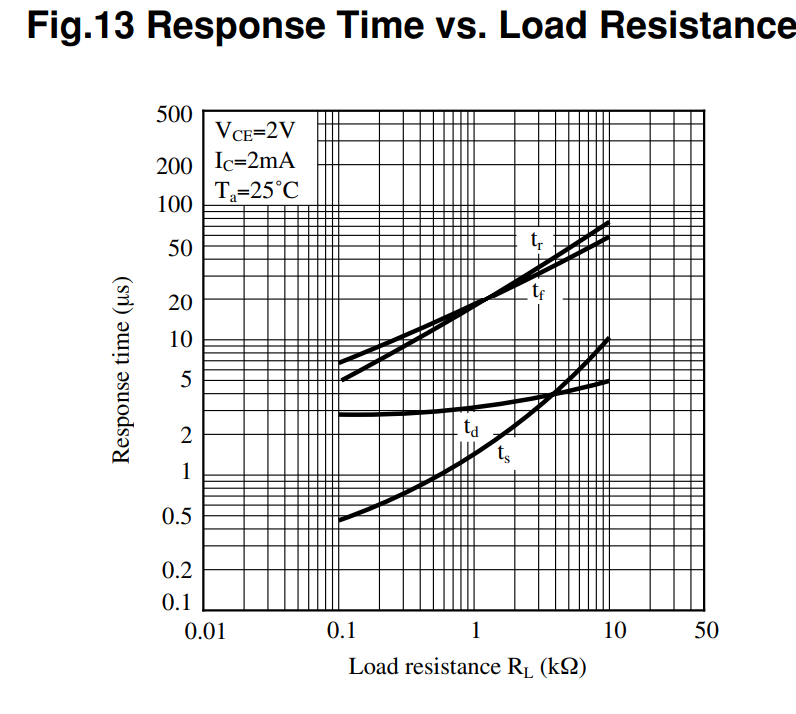 For high speed applications it's better to use a logic-output optoisolator such as 6N137. It uses a photodiode internally on a chip that delivers a logic output and has guaranteed fast behavior under useful conditions.

There are some tricks to getting faster performance from crummy phototransistor isolators.

The simplest is a B-E resistor -- when the base pin is available (e.g. 4N35). This greatly reduces CTR, especially at low currents, but provides a sink path for stored base charge.

Basically, the C-B junction is photoactive; the photocurrent then flows into the B-E junction, amplifying it by hFE. The B-E resistor shunts some of that current, so the transistor stays off until Vbe is reached (hence, CTR drops precipitously below operating current), and turning it off faster (discharging Cbe). This allows rise/fall times around 2µs. 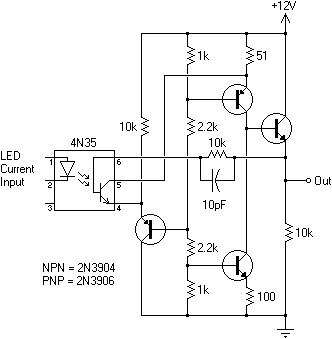 This has bandwidth similar to what you're asking, actually. It's a transimpedance amplifier, using the phototransistor as combined input current source and input transistor. It can probably be improved further (I forget now exactly what the cutoff frequency was, but it had a 1st order response, implying it could be compensated to go much faster).

Not that I would encourage using such circuitry -- this is more of a gimmick, interesting that it works at all, but not very practical.

Ready-made devices exist, with better optimized properties -- 6N136 is a photodiode paired with a general-purpose NPN, greatly saving on capacitance and stored charge. You can even add a B-E resistor to speed it up (though, its CTR is quite low to begin with) -- but therein lies the problem, as the base pin itself is extremely sensitive to injected charge: the CMRR of this device is appalling. There is, however, an improved version: SFH6345 omits the base pin, and has improved shielding between emitter and photodiode.

This is also at the point where logic-level devices, like 6N137 and others (HCPLxxx, etc.) show greater promise, as well as entirely non-opto devices like TI's capacitive isolators (ISOxxxx), and the monolithic transformer based devices from Analog Devices (ADuMxxxx), Si Labs, Infineon, etc. These are MUCH faster (>100Mb available) and offer excellent CMRR.

Do note that most of these are entirely digital methods; if your signals are analog, you may be better off digitizing them first. There are matched-photodiode isolators (IL300, HCNR201, etc.) which still need some offset/gain calibration (just, much less than a single photodiode or phototransistor type, and which are stable vs. aging), or there are AC modulation methods which may be of interest (say, AM or FM into a transformer).

If you search at Mouser or Avnet rather than Digikey you will find more high-speed optoisolators in the 1 to 10MHz range that are low cost.

6N137's are the best choice for this app. by far. Multiple makers and distributors and low cost, good supply.

This way keeps the effective impedance from going high with Vce/Ic at say 5% IMAX.

There are many key design tricks in using any diode or photodiode for max. data rate.

The problem with optocouplers is that they are two analog devices (an LED and a phototransistor) and the actual delay will depend on the driver and load. So asking for the max frequency brings you the question of 'what is it connected to?'

If what you need to send is a digital signal and one of the requirements is the frequency or data rate, you may be better off by choosing a digital optocoupler, where the output is digital with a fairly sharp edge and most importantly quite independent of the load.

Mouser has a separate category for high speed optocouplers: https://www.mouser.co.uk/c/optoelectronics/optocouplers-photocouplers/high-speed-optocouplers/

You can look at the data rate column. For example if an optocoupler is marketed for 1 Mbps NRZ it will likely support a 1 MHz square wave.

Not the answer you're looking for? Browse other questions tagged datasheet opto-isolator or ask your own question.

12
Optoisolate 2MHz SPI communication
4
Need an optocoupler for getting directly proportional output galvanically isolated from the DC input
7
Under what conditions does an optocoupler work fastest?
4
How do I choose an optocoupler for (19200 baud) serial communication between Arduino and RS422 transceiver?
5
Understanding optocoupler performance with collecor or emitter resistors
4
In an isolated SMPS feedback design, how could optocoupler latency be higher than the switching period?
4
6N137 Optocoupler Pin Configuration
0
Open Collector to drive PNP without Pull-Up
1
How to know the minimum LED current of an optocoupler?