I've developed a PWM dimmer to dim 100W of LED strips. As I dim it to low PWM values, the power supply begins to hum. I have tried to use also higher PWM frequencies of up to 30kHz, but the problem persists. I have also tried to add big caps (470uF resp. 2200uF) to the power supply before the MOSFET (marked in schematics below) to smooth out the load the power supply sees. But it doesn't have any effect.

What can I do to mitigate the noise?

Edit: I'm using a Meanwell LRS-100-12 power supply and 12V LED strips. I also tried it with shorter LED strips (i.e. ~25W), but it also hums. Measuring the PWM signal when the noise is the loudest. Measurement is done as described in answer: https://electronics.stackexchange.com/a/619725/45406: 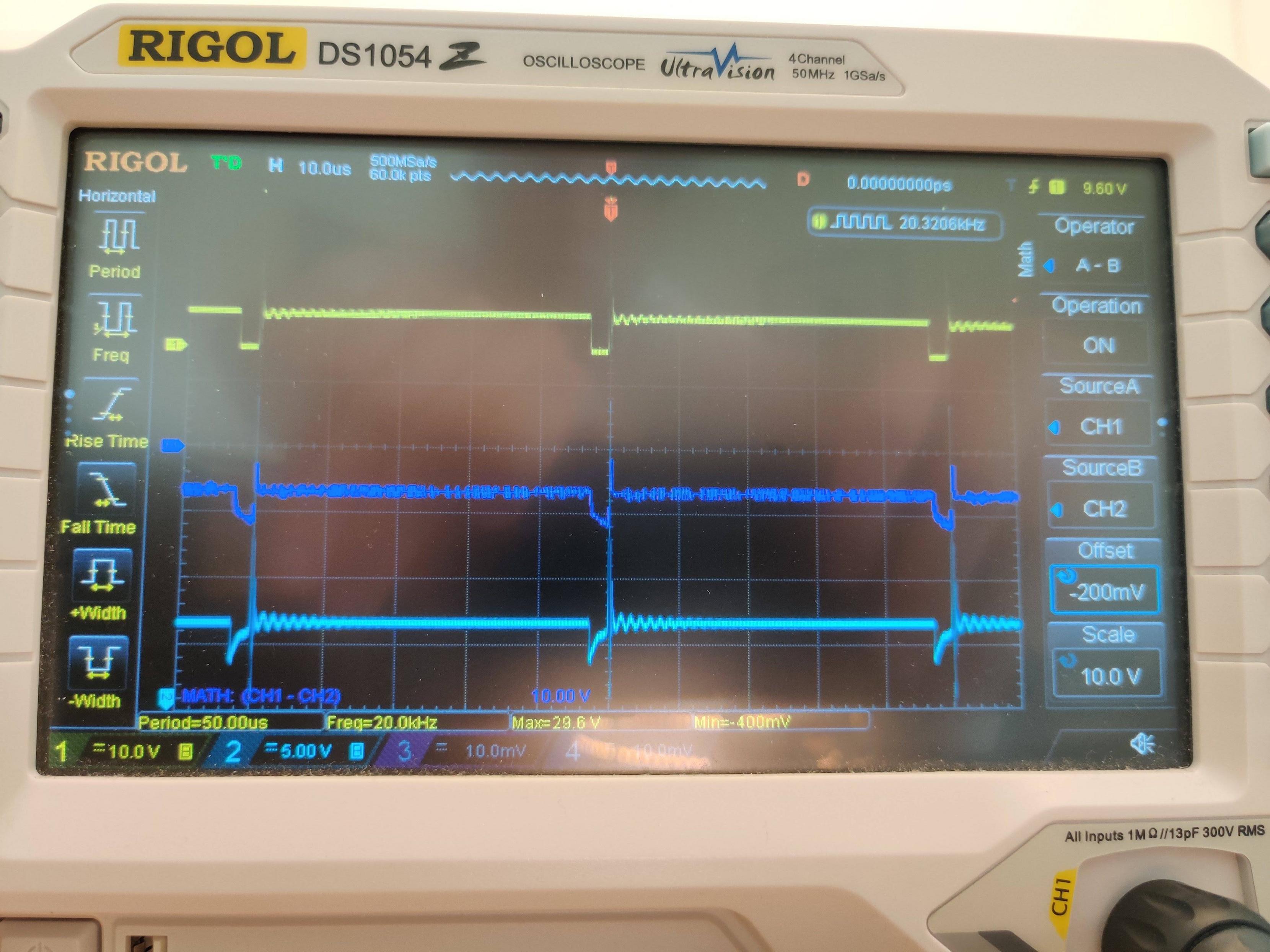 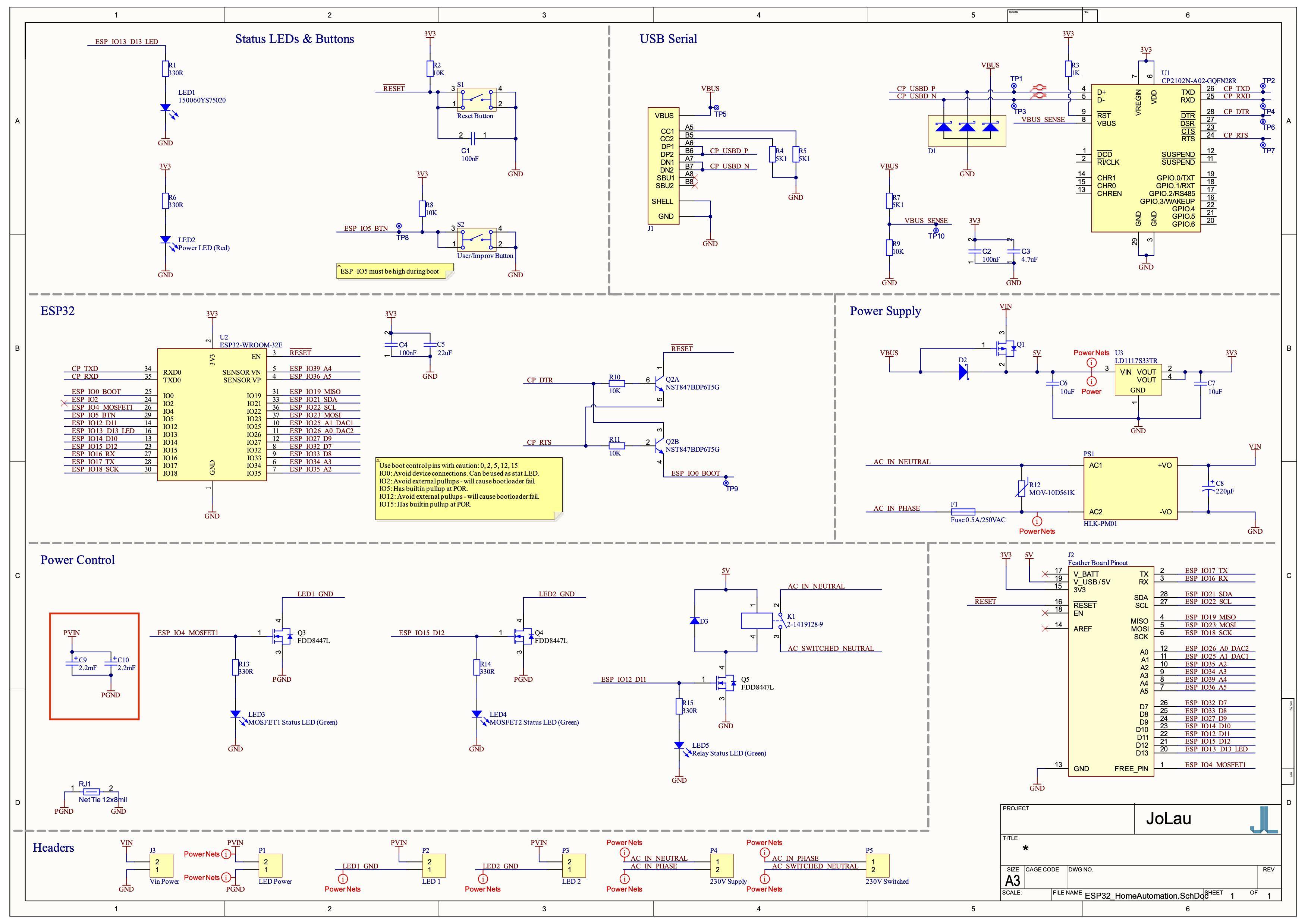 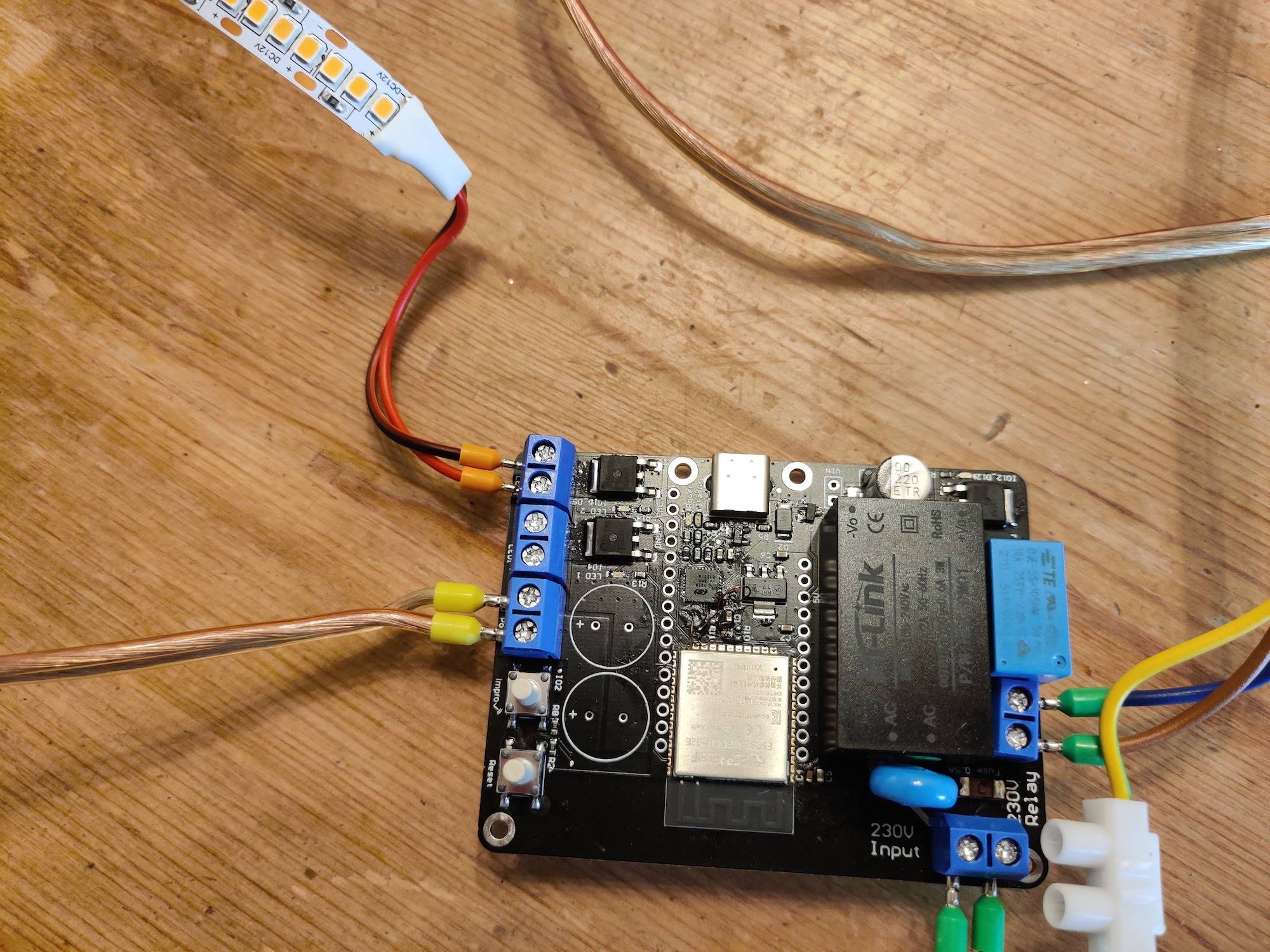 PWM-ing the output of a switched mode power supply (SMPS) is nothing different than testing its transient response (e.g. 0-to-100% then 100%-to-0), but way faster. Load transients are normally performed with pure resistive or pure capacitive loads. But in your case, forcing a load transient with a partially inductive load creates some trouble for your power supply:

EDIT: The text I removed (strikethrough) above apply to power supplies with remote sense inputs which are connected to the load with very long cables.

Load transients with very low duty cycle may not allow the converter to recover quickly due to the very low load duration. If the converter's response is not fast enough the output may start to oscillate. And also, by PWM-ing with very low duty cycle, you might be forcing the supply to hiccup which sometimes results in buzzing (gapped transformers are happy to buzz - magnetostriction. Some smartphone wall chargers are a good example to that: As the charge level approaches to 100% the charger starts to buzz).

Another solution could be to decrease the PWM frequency to leave enough time to the converter to recover, but decreasing further will make the overall PWM audible due to the lengthy coppers.

If you have lots of LEDs (100W is a lot), you can reduce the current ripple with multichannel.

Instead of using just two MOSFETs, you can use as many as you have PWM channels on the ESP32 (so, 8 or even 16 channels). This means smaller cheaper MOSFETs, and something like 74HCT245 as 3V3 to 5V translator to drive them if they don't like 3V3 gate drive.

Then you simply offset the t=0 point of each PWM waveform so they don't switch all at the same time.

Right now, you only have two MOSFETs, but you can still shift one by a half PWM period. This will halve ripple current.

I use Meanwell power supplies for my LEDs, I never noticed any noise from them. But I didn't use the open frame ones, rather the ELG and other encapsulated models. Maybe the fact the whole circuit is dipped in resin dampens the noise.

Rather than fixed with PWM, it ought to be a variable f that increase due to hysteretic feedback % with series L.

Your low PWM rate must be stimulating a resonant pole in the regulator with sub-harmonics with overshoot and surge currents may be inducing resonance in the ACDC core causing hum. This is common with Buck then PWM with alias and even chaos white noise when used with a boost regulator.

It can be fixed several ways e.g. with ultra-low ESR cap after L to add a zero to cancel pole and PFM modulation instead of PWM with avg current feedback.

It must be a weakness in that ACDC regulator.

I can't read your schematic at the moment with a blank overlay on iOS on jpg, but I do not see any meaningful measurements or layout photos.

Not an answer, but some suggestions to try out:

Feel free to play around with the values in your simulation software of choice but you will notice when doing so that the higher PWM frequency and the slower slope (bigger R2 gate resistor above), the less filtering is needed. Please adjust to include real ESR values for the capacitors. That 100 uH, 9+ A capable inductor will be large...

Not the answer you're looking for? Browse other questions tagged pwm noise led-strip dimmer or ask your own question.

4
Led strip dimming
0
Converting PWM to Constant DC for Power Applications
0
How to filter noise out from large PWM system
0
Led strips power supply , consumation and contorller
1
uC controlled MOSFET based LED Dimmer stops responding
1
Heated MOSFET with LED strip
2
How do I deal with acoustic noise from a transformer under PWM load?
0
Powering 12 V LED strip from a 3.3 V esp32 including PWM