Could someone explain the difference between these two flyback feedback circuits, and how the second circuit works?

Any application note available would be a favor for me. 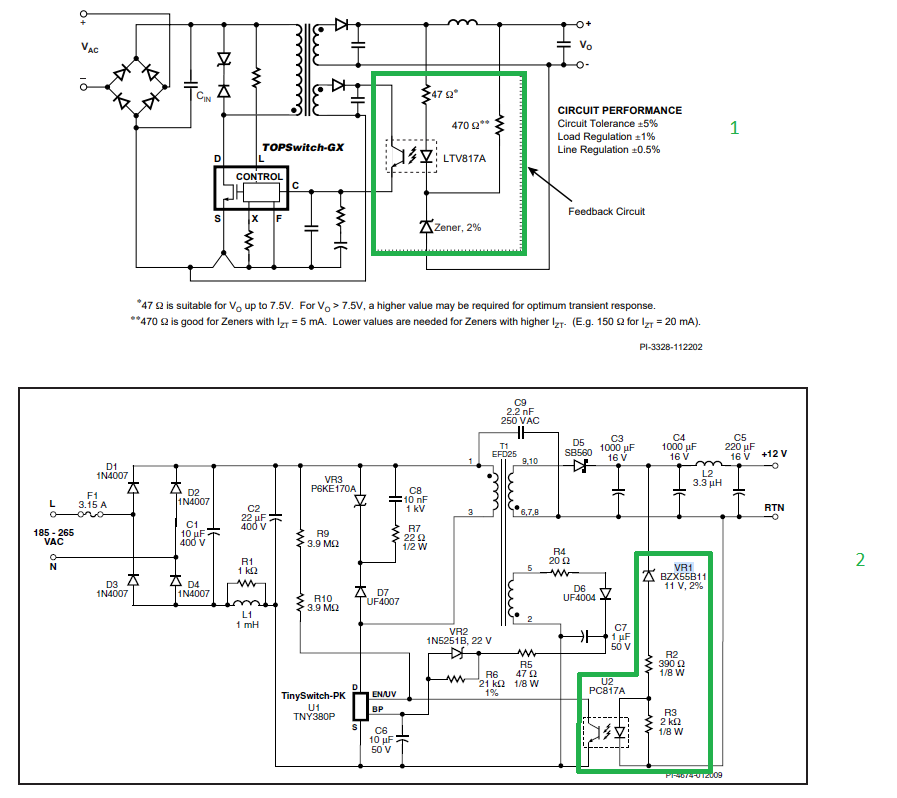 In terms of operation, the two circuits are almost identical and I don't think the transient response will differ much between the two. What matters for both is to provide enough bias to the Zener diode so that it operates far from the knee, in a zone where its dynamic resistance \$r_d\$ is low. Indeed, in these low-gain regulators, the feedback current which is the current circulating in the optocoupler LED depends on the total series resistances. See the below illustration excerpted from my book on loop control: 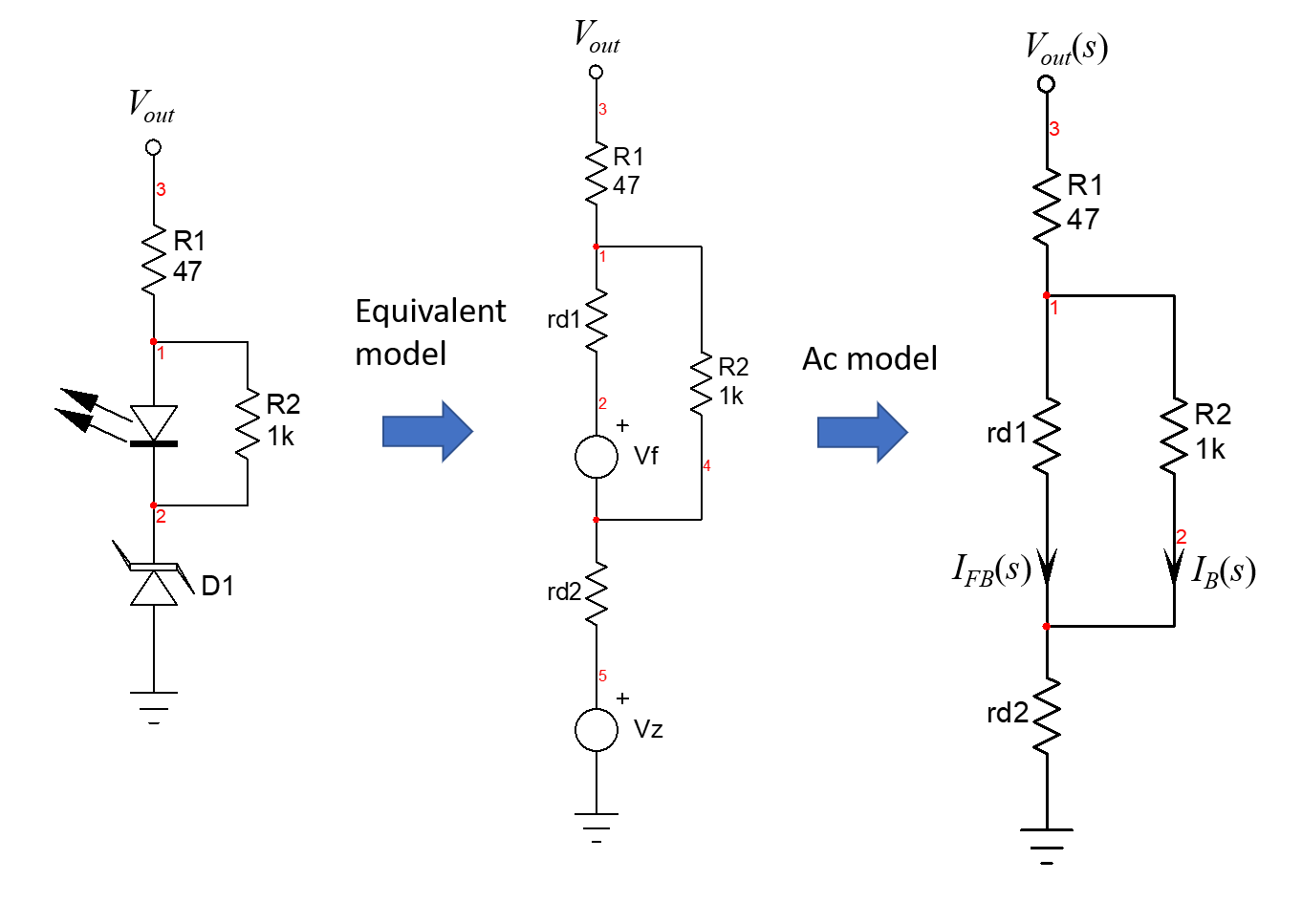 One cheap way to force a bias current in the Zener diode is to wire a resistor in parallel with the LED. As the LED drop is around 1 V, then the injected current is \$\approx \frac{V_f}{R_{bias}}\$ or 1 mA if you consider a 1k resistance. One thing that needs to be noticed though is the fact that this bias resistance diverts some ac current from the LED and reduces the overall gain, depending on the LED dynamic resistance. It is less of a problem perhaps with shunt regulators as in Power Integrations parts considering the stronger feedback current and hence the lower LED dynamic resistance.

In the upper graph, the bias is derived from the output voltage directly and I believe it does not affect the feedback current as it does with the parallel resistance. When secondary \$LC\$ filters are involved as in these examples, the exact loop gain derivation is quite complicated and the best is to simulate the ac response with associated transient reactions.

This is what I did below, using one of the 60+ free simulation templates that I released to supplement my last book on transfer functions. You can download these templates from my webpage and they work with the demo version of SIMPLIS for most of them: 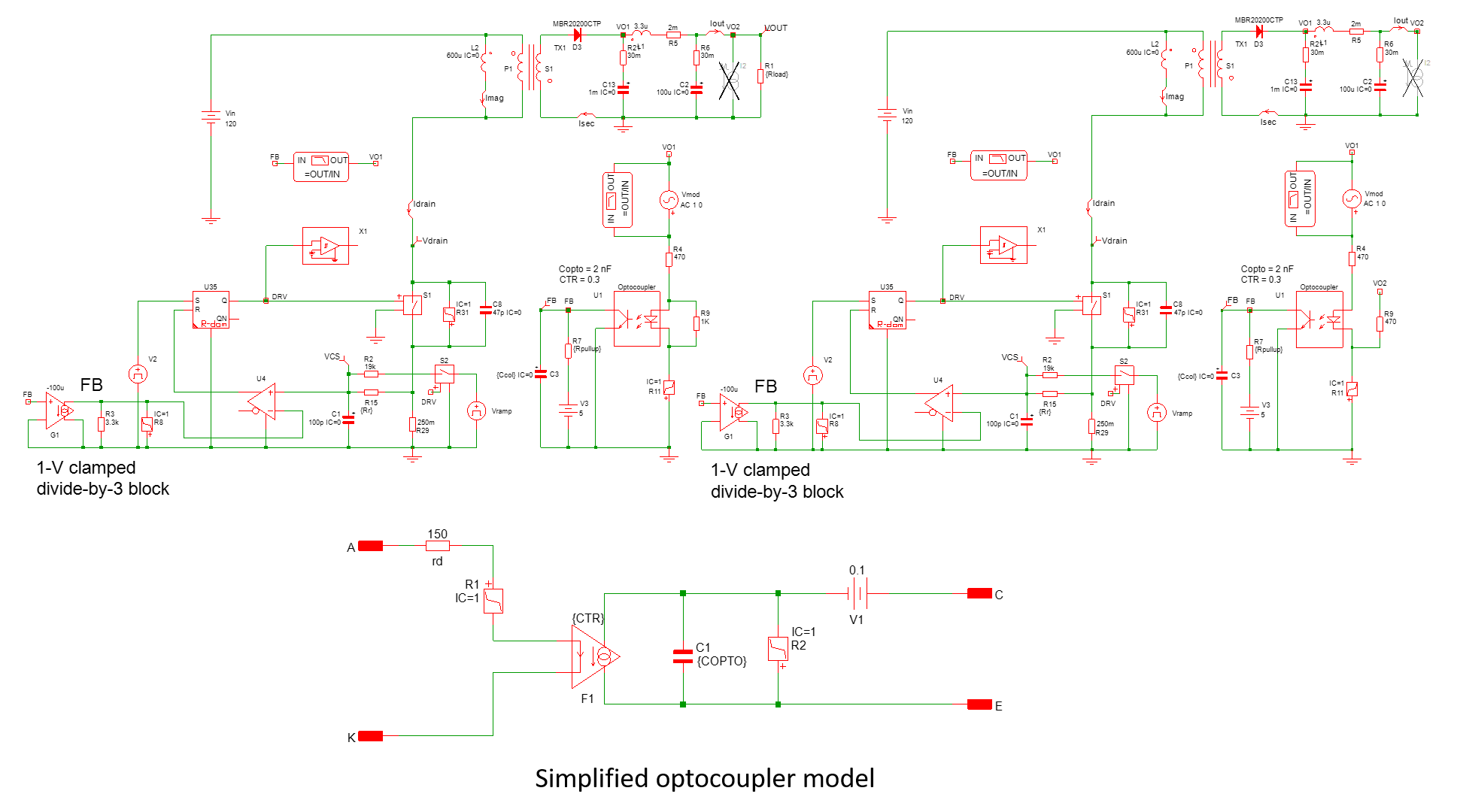 With SIMPLIS, you can extract the small-signal response from a switching circuit and you don't have to resort to an averaged model. The low-gain regulator option does not offer many options to close the loop. You adjust the series LED resistance value to crossover in a region where the phase margin is acceptable but you can't shape the compensator response as you would with an active filter like a type 2 for instance. I arbitrarily selected a value there and crossover is 4 kHz for the given operating point of this 19-V adapter:

As you can see, the open-loop gain is barely acceptable you would probably want to reduce crossover in a region where phase margin is higher with a better gain margin. Increase the LED series resistance would do the job but you may have to select a different Zener value as the dc bias is affected by this LED resistance. Finally, as expected, the transient response between the two approaches - bias with parallel resistance and bias with resistance tied to \$V_{out}\$ - are identical. What changes is the dc output voltage as the operating point depends on the adopted configuration.

1
Kinds of Feedback
1
How different is the performance of TVS vs Zener diode in flyback protection
0
Flyback Voltage Feedback Quality
1
Sizing zener and resistor for solenoid flyback
4
Flyback diode is acting weird
0
What is the purpose of a schottky/zener couple on an isolated flyback topology?
0
High voltage Flyback transformer polarity
1
Multiple output Flyback - Stacked transformer - Cross regulation - TL431
0
Effect of parameters on feedback system and some confusion regarding it