Ask Question
Asked 1 month ago
Modified 1 month ago
Viewed 781 times
1
\$\begingroup\$
Closed. This question needs to be more focused. It is not currently accepting answers.

I designed a 2nd order Butterworth low-pass filter, but it did not work correctly. What is the mistake in this filter? 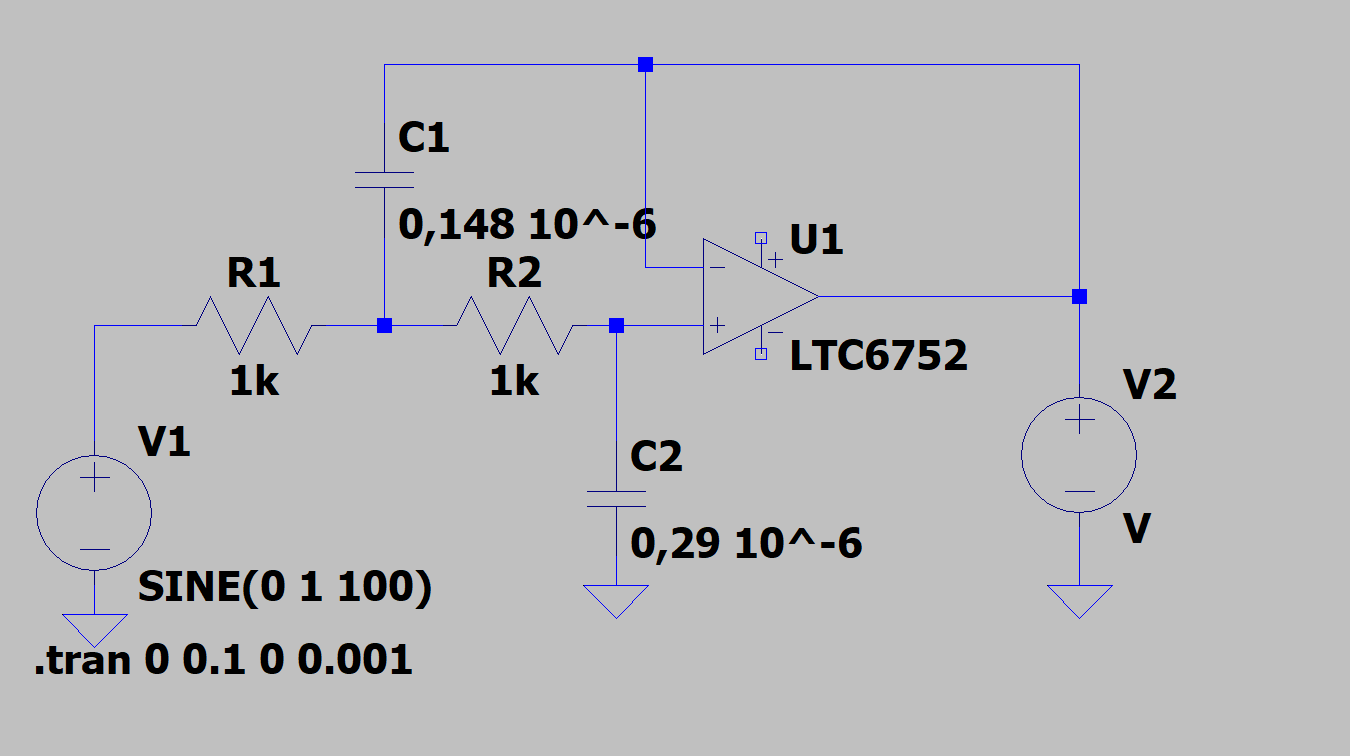 I don't like using applets to solve problems like this. I much prefer going back to the basics fir the various filter equations, so that I know the source of where things come from. It's one thing to let some mysterious process create numbers for you even if that does work. It's another thing to be able to sit down and work out the details for yourself.

Butterworth was a kind of super-genius with mathematics. So I won't dig a lot into how it came to be. You can read the Wiki page on Butterworth for some details.

But the basic visualization for Butterworth is to imagine a unit circle on the \$\left(\sigma,j\omega\right)\$ coordinate system: 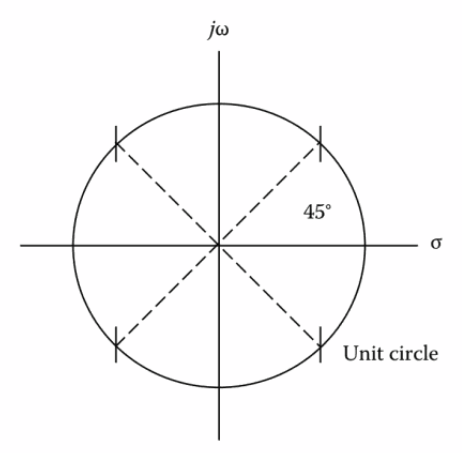 (Above is Figure 2.10 from page 2-11 of Wai-Kai Chen's "Passive, Active, and Digital Filters" from the 3rd edition of the series, The Circuits and Filters Handbook.)

The above shows the case for a 2nd order Butterworth. There are four, not two, but four poles. These points can be found by solving the following equation for \$x\$ (where \$N\$ is the order -- in this case \$N=2\$):

Returning to the Butterworth

(A problem with Butterworth is that it is pure mathematics and doesn't deal with non-linear minimax optimizations, which can cope better with part variations/errors. This is where Chebyshev finds its place. But that's for another time.)

Note that this means your capacitor values were swapped, just as Andy said they were.

But the wonderful thing now is that you can see exactly how that is true, rather than seeing it from some applet that uses formulas but fails to explain how they were developed or even what they are, in particular.

The above allows you to fish. The applet gives you a fish. I prefer knowing how to fish.

It also appears that you don't know how to provide power supplies to Spice simulations. You'll need to work that out. It's important. But that's a separate question, really.

Finally, winding up with \$C_1=2\, C_2\$ can be inconvenient. As it turns out, for this topology it must be the case that \$C_1\$ is at least twice as large as \$C_2\$ (this can be proven from the above.) But as is often the case, you don't find capacitor values that are exactly double another's value. Instead, for example, you might have \$22\:\text{nF}\$ and \$10\:\text{nF}\$. So, instead of 2 shown here, you'd use 2.2 as the factor. And then use this factor to work out the resistor values, from there. Resistors come in a much greater array of value choices, so focusing first on the capacitors is probably better.

Let's look at this schematic for the 2nd order low-pass Butterworth (as documented by Sallen-Key): 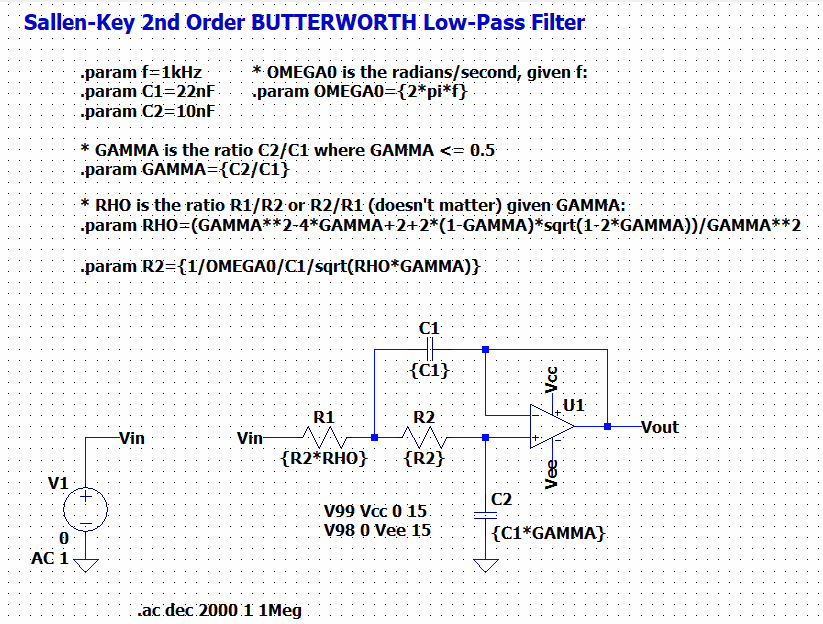 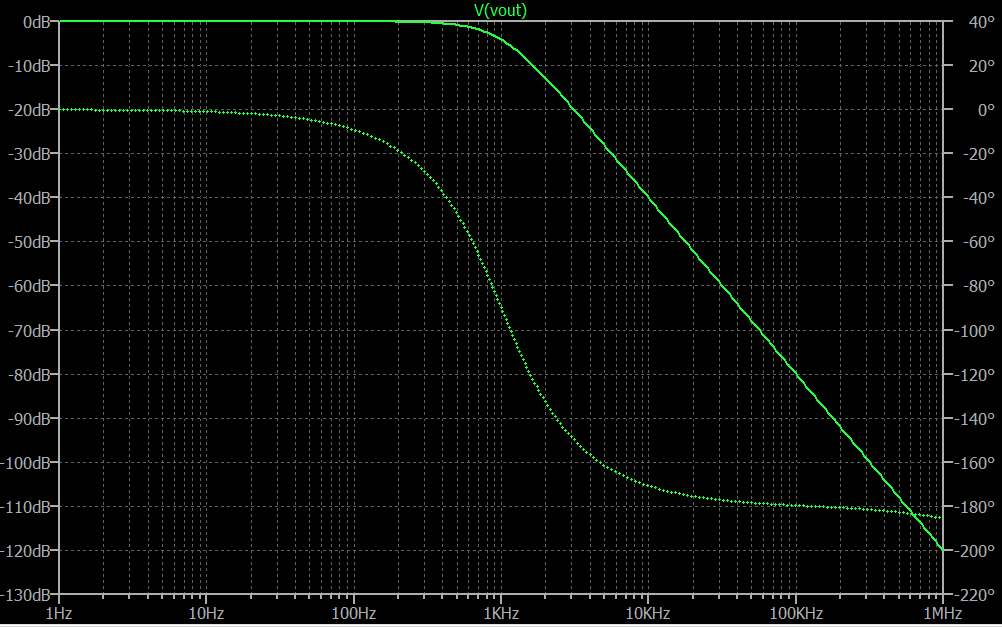 Here is the appropriate low-pass filter topology they list in their catalog:

As you can see, they offer four different pairings of design parameters for the same topology which are linked to their design formulas:

Note that their use of the term, dissipation factor (\$d\$), is now antiquated. Modern teaching uses the damping factor, \$\zeta\$. For conversion purposes, \$d=2\zeta\$.

I designed a 2nd order Butterworth low-pass filter below the image but it did not work correctly, what is the mistake in this filter? 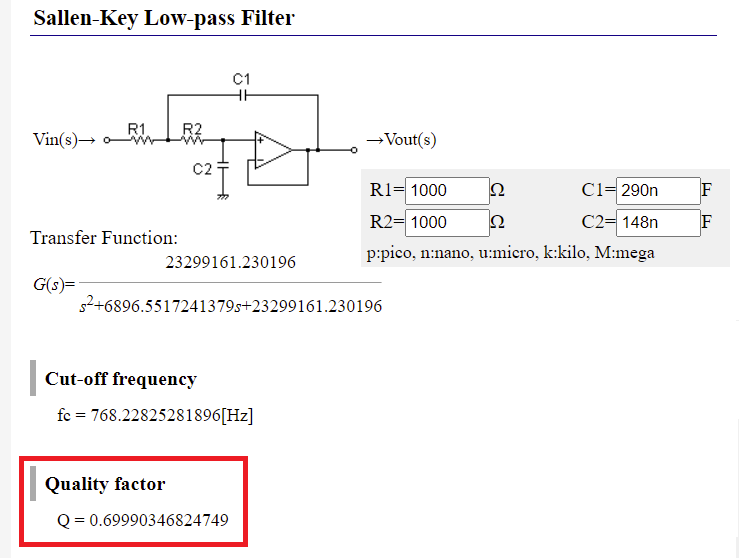 Try C1 = 295 nF to get a closer-to-Butterworth true response. Also, make sure your device is correctly powered.

Also note that the LTC6752 is a comparator and not an op-amp and may produce some unusual effects as a linear filter: -

I'm sure you might want to think about choosing a more suitable device.

I don't think you can use a comma for a decimal in LTspice. It doesn't work in my installation. Perhaps locale affects it but I wouldn't count on it, you should use a decimal point.

Also, if you want to use scientific notation for values you can just use an E like this

For capacitors you should use u or uF for microFarads, n or nF for nanoFarads, and p or pF for picoFarads.

I use the scientific notation for large numbers for example if I was doing an AC analysis to 10 Gigahertz I would use 1E9.

Megohms should use Meg not M as LTspice is not case sensitive and M will be the same as m which is milli, or 1/1000th.

Not the answer you're looking for? Browse other questions tagged operational-amplifier filter ltspice or ask your own question.