What is a multimeter at its core?

We know that, thanks to Ohm's Law:

These three functions (ammeter, voltmeter, ohmmeter) are typically available in every multimeter. (Let's set aside other functions such as capacitance, inductance and also focus only on DC.)

My questions is: What is/are the core measuring element(s) in a multimeter?

Is it an ammeter + Ohm's Law, is it a voltmeter + Ohm's Law? Are there multiple? Or is the answer more nuanced? Does it depend on whether it's a digital on analog one? Autoranging vs manual ranging?

My suspicion is that it's a voltmeter (a very precise ADC chip) but only because I've seen a shunt resistor in every meter I ever took apart, but that's only a couple models and I only worked with digital ones. I wouldn't be at all surprised if the answer was more complex.

And how does the ohmmeter work in that case? Reference current source? Or reference voltage + divider made of reference resistor and measured resistor?

At heart, a common digital multimeter is a resistor, a current source, an integrator (also called an electrometer), and a comparator.

Phase 1 is sized so that a counter will count to the full-scale output. Phase 2 undoes the count, and a timer tells how long it took compared to Phase 1. Since Phase 1 was set by the value of the current source, Phase 2 is equal to the current through R1, and if R1 is precisely known, so is the input voltage.

The result is that the clock frequency of the counters involved can be cheap and not terribly precisely known - as long as it doesn't drift much during the period of a measurement. You do need to know the current source precisely, but that's just a voltage and a resistor (and a switch). You can set both of those quite precisely.

Often referred to as a DVM, are usually based on an analog to digital converter (ADC) with about +/- 200mV full scale. The ADC would have a very high input resistance. Sometimes about 10 megohms although it may be essentially infinite in many designs.

They often have a low voltage scale where the terminals connect directly to the ADC. The input resistance is then either extremely high (1 Giga ohm or higher) or 10 megohm.

For other voltages there will be resistor dividers to scale the basic ADC input voltage to the required range. For example a 50:1 divider would give a +/- 10V range. It is common that the input resistance seen by the terminals is maintained at 10 megohms regardless of the voltage scale.

At the voltages and currents the resistance of any switches in the path can seriously impact the accuracy so they are designed such that the contact resistance does not significantly affect the reading.

Depending upon the specific arrangement for current measurement the voltage drop of the meter can be more than the basic 200mV scale of the ADC. Maybe up to 500mV or so. In addition there can be significant voltage drop in the probe leads so you need to be careful when doing current measurements of low voltage circuits that the meter does not disturb the circuit you are measuring.

Other scales such as resistance, AC measurements or temperature can easily be provided by using conditioning circuitry to create a voltage that is proportional to the measured quantity and feeding it into the ADC.

These are usually based on a moving coil movement with a basic sensitivity of about 50uA, that is current rather than voltage although it will have several hundred to a couple of thousand ohms of resistance so will drop 50-100mV at full scale.

By putting resistors in series the voltage range which is measured can be defined. For example a 200 kilohm resistor would set the full scale to 10 Volts.

The basic current range would be 50uA but by putting low value resistors in parallel (a shunt resistor) the current can be increased to any desired value. Most of the measured current will pass through the shunt resistor with a very small proportion through the meter movement.

Care is needed with temperature variations as the copper coil in the movement will have a positive temperate coefficient and cause inaccuracies when paralleled with a shunt resistor. 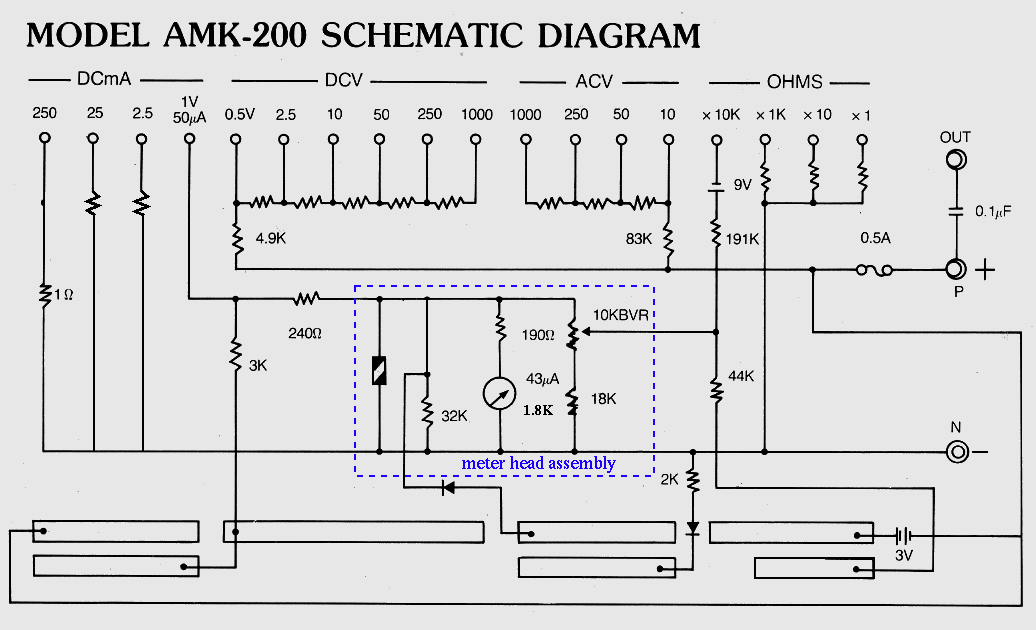 Image credit: Answer by devnull to the Electrical Engineering Stack Exchange question: What does the multimeter dial do internally?

The main component is an ADC to read voltage.

For voltmeter, the range selector will set gain or scale of input to ADC to maximize precision.

For ammeter, the current just flows through a shunt resistor and gives a voltage across it that is read by the ADC. The range selector will set amplification gain and sometimes change resistance and wattage of resistor to handle higher current.

Note: The constant resistance method is easier and cheaper to make. I have seen this method use in s component tester with acceptable precision for a hobby project

Not the answer you're looking for? Browse other questions tagged multimeter basic ohms-law or ask your own question.

11
Fuse blowing in 12 multimeters rated for 200mA, only measuring 12.5mA. Why?
5
9V battery and resistor are connected in series - the voltage across the resistor is < 9V. Why?
3
Why isn't Ohm's law working for this simple circuit?
2
high resolution analog AC voltmeter mystery
2
General definiton of Ohm's law
0
How to read a multimeter (digital) -- should I get 2A readings from a couple of AA batteries?
0
How is the current through this resistor not obeying ohm's law?
1
What equation do you use to find these current?
0
Calculating the reading on ammeter \$A_1\$: why am I incorrect?
1
Finding resistance for parallel resistors: how is my reasoning incorrect, and what is the correct reasoning?