How to choose the RC values between a buffer and an ADC input?

In the OPA365 specification sheet there is this example circuit where they add a RC filter between a unity buffer and input of an ADC. My understanding of the purpose of this \$ 100 \,\Omega - 1\operatorname{nF} \$ RC filter is to anti-alias the signal coming out of the buffer - by filtering out any components higher than 250kHz before it enters a 250kSPS ADC. But when I calculate the cutoff frequency with the chosen RC values, I get:

1.6 MHz is more than six times larger than 250kHz! This RC filter is NOT anti-aliasing the signal into the ADC. Even if I take account of the open loop output impedance (\$ 30\,\Omega\$), I still end up having a cutoff frequency of \$ 1.2\operatorname{MHz} \$. Also according the the Nyquist theorem, I should set my cutoff frequency to at least half of the ADC sampling rate, or 125kHz, by setting my RC values to be 12-13 times larger than what TI chooses for this example circuit. 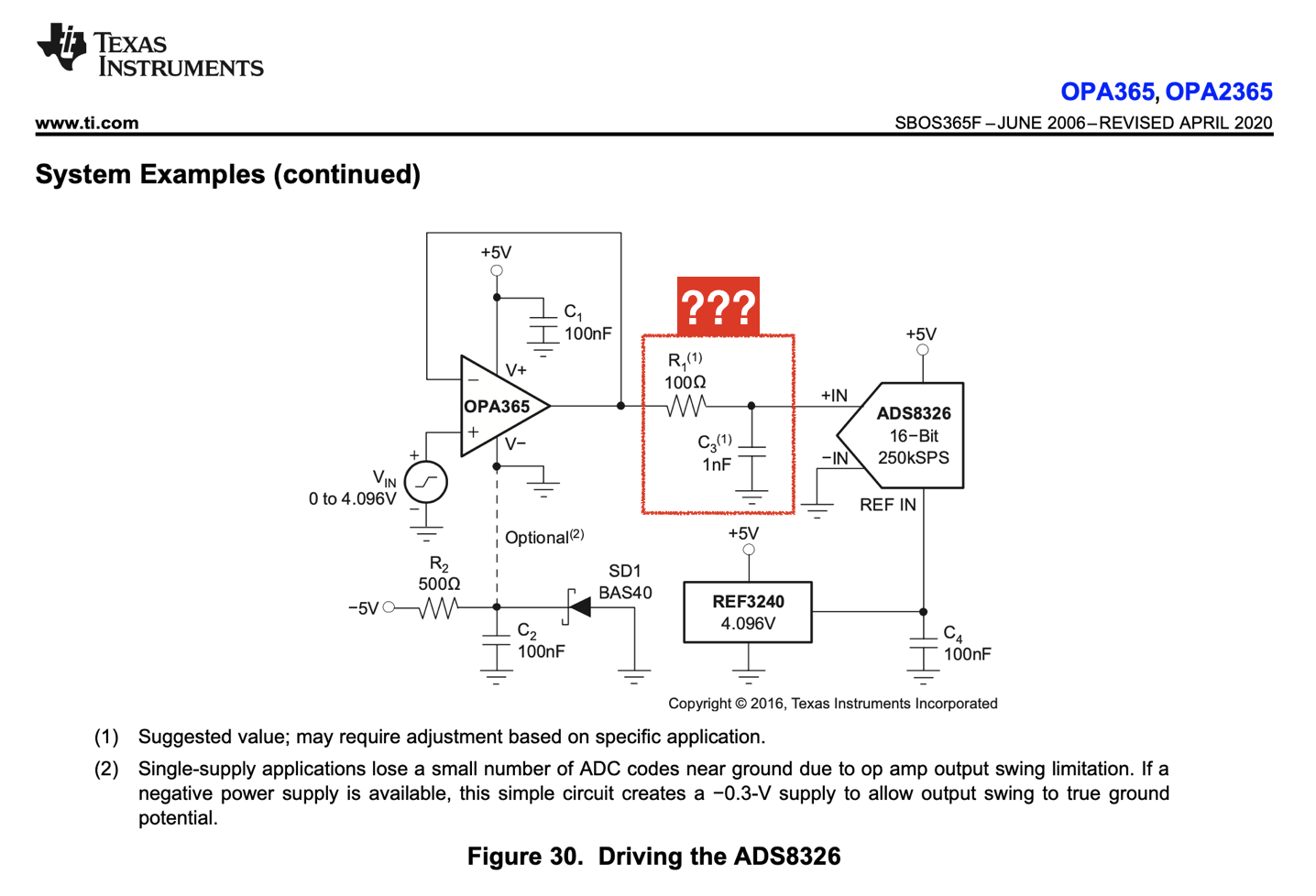 It is clear in the question that it is already known that the RC has nothing to do with anti-aliasing for the sampling frequency mentioned. From the ADC datasheet we can get an equivalent input circuit as follows: 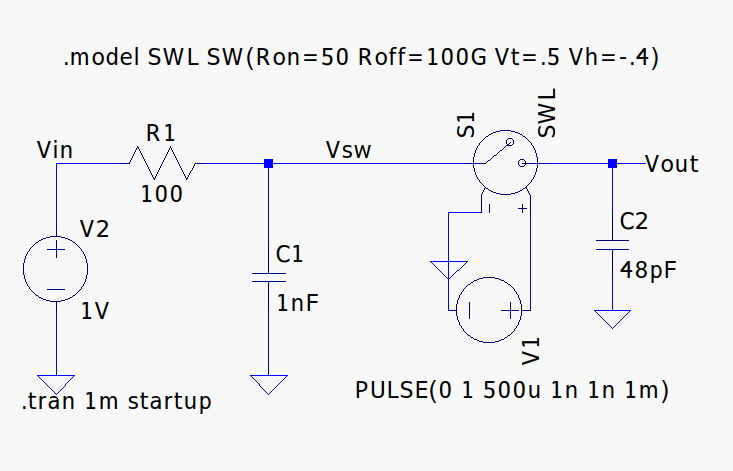 Note that the switch also models the "On resistance". You can understand that the first capacitor, which is much larger that the second one, works like a large bucket quickly filling a small cup, through the switch resistance: 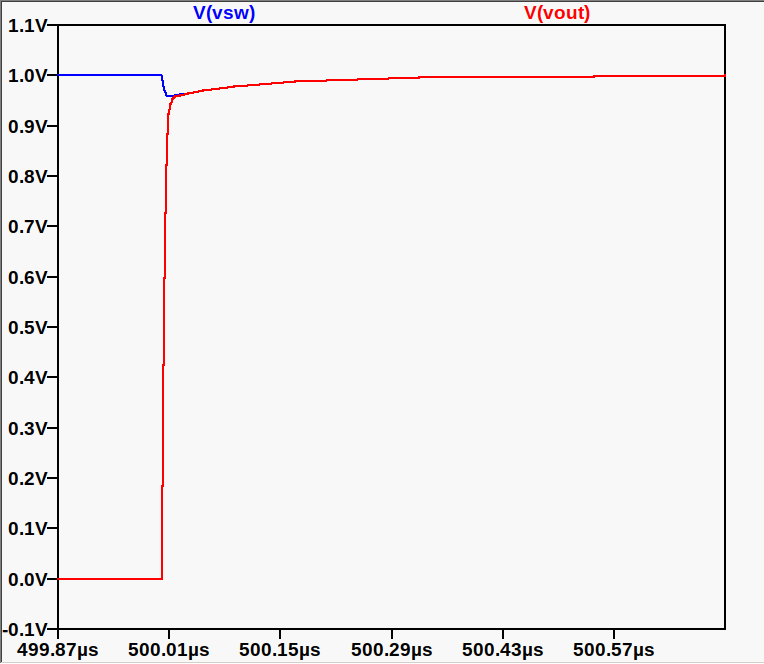 So, it is not related to "frequencies the cause instability to the charging capacitor", but to quickly charging the sample-and-hold capacitor.

Here is a nice reference from TI about "Charge Bucket Filter Design". But in the ADC datasheet, this information is to be found: 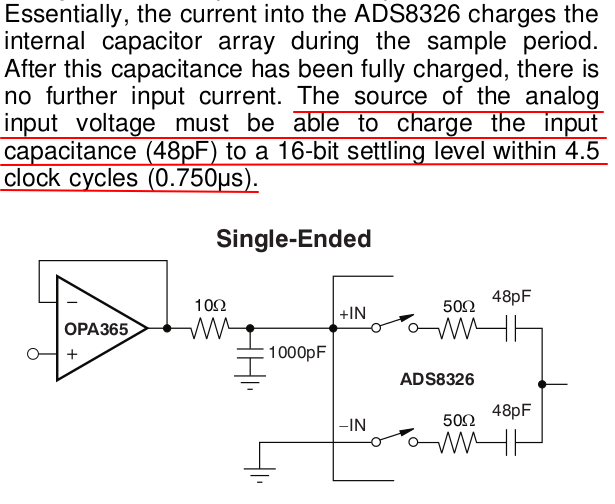 Ideally the resistor would be zero (but it may be a problem for the opamp) and the capacitor should be large enough so the amount of charge it looses to charge the ADC capacitance is small enough to avoid further conversion errors within the sampling frequency (and parasitic inductance and resistance could be a problem too for the large capacitors).

It is not for anti-alias filtering.

When the ADC performs a conversion, it charges a capacitor to the input voltage and charging the capacitor takes a surge of current. So at 250 ksps, the ADC input causes current surges to the op-amp output at a rate of 250 kHz.

Many op-amps can't drive that kind of load and can become unstable. The RC filter is there to isolate the ADC input from the op-amp output.

The RC filter removes a lot of high frequency content of the surges so load for the op-amp output is easier for it to handle.

The capacitor provides a low enough impedance to the ADC input at high frequencies and can provide the current to charge up the ADC sampling capacitor quickly, in the time it needs to be charged during the sampling phase.

The resistor provides a high enough impedance to the op-amp so the capacitance on output and the ADC sampling capacitor being switched at the sampling rate does not make it unstable.

That is why the ADC datasheet says that RC values are application specific and may need adjustments. The values depend on ADC sampling rate and which op-amp is driving the ADC input.

This is not really a filter but a matching network between the output of the op-amp and the switched capacitor input of the ADC. Its purpose is twofold:

ADC input sampling and multiplexing switching produces very fast transients - they are more in the frequency realm of fast digital edges than what we'd think of as "analog" signals. Those transients are often orders of magnitude shorter than the sampling period of the ADC. E.g. a 100ks/s ADC that samples every 10us and has a 1us sampling gate time, might have transients that last only tens of ns. The more modern the ADC, the faster the transients, as a rule of thumb.

Most affordable op-amps that drive high-resolution ADCs don't nearly have enough bandwidth (or low enough noise) to deal with those transients directly. The op-amp's feedback loop must be thus shielded from the transient, so it doesn't get disturbed and then take "eons" to recover. The sampling capacitors must be also provided a secondary, much faster charge source than the op-amp's output can provide.

There are three time "constants" we need to keep in mind here:

As a rule of thumb, each subsequent time in this list is at least an order of magnitude shorter than the preceding one.

As for choosing the values: absent very accurate models of the parasitics involved, it takes experimentation to select appropriate values. Often there may be two or three disparate combinations of parts that yield equally good performance, e.g. 1nF+20R or 1uF+50R. It is also the case that more such varied combinations work with a faster op-amp, but the slower op-amps won't be able to cope with the "fastest" combinations. E.g. an op-amp substitution may make the 1nF network useless, whereas the 1uF network works for both.

1
ADC undersampling AND oversampling
7
Divider and lowpass combined
2
ADC anti-aliasing filter
2
Filtering noisy buffer output
4
Lowpass Filter and Attenuator
0
Calculating sampling frequency off of estimated stop band attenuation
2
Adding anti-aliasing filter to op-amp before ADC, clock frequency or sampling frequency?
1
How do you choose the cut off frequency of a low pass filter for analog input
0
Can I avoid buffering an analog sensor to ADC if I don't know its output impedance?
2
Filter position for delta-sigma ADC