In the context of FPGA design, I sometimes need to estimate PCB trace delays between the FPGA and external devices to properly constrain the input/output timing. As those do not need to be accurate to the picosecond, I'm looking for generally accepted rules of the thumb rather than exact formulas. From what I've seen here, 150 ps/in seems to be a reasonable estimate. Which values do you use?

As the delay is dependent on "many" variables, you should use AppCAD from: https://www.broadcom.com/appcad.
Don't forget "matching" impedances load. 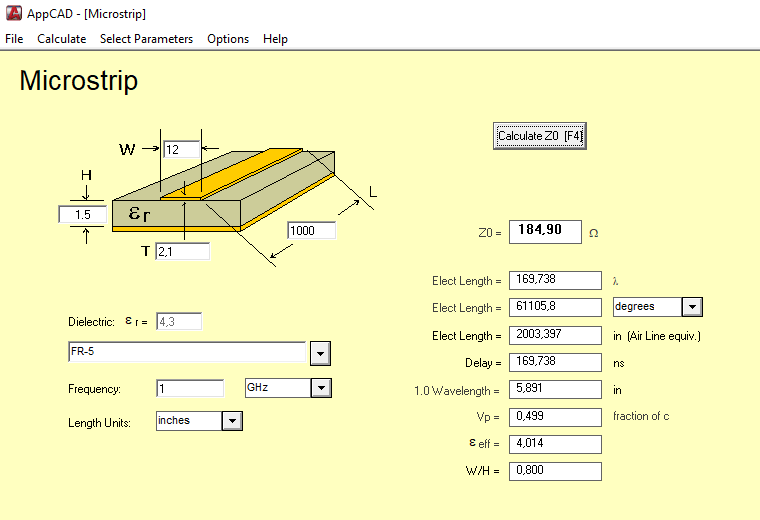 Well, this dives into the topic of high-speed board design, and that's fine. (going a bit more basic, also for future readers)

Basically, when we're talking about rapidly changing currents coming out of a IC pin, we cannot (appropriately) model these as the current flowing in the conductor. (A simple example to illustrate that: if you attach a couple cm of trace to a pin that outputs something at 5 GHz, be it a sine oscillation, the 5 GHz fundamental or the 5 GHz harmonic of some digital serial line, and simply let it end, congratulations, you've built a transmitter, and the energy put into the line will just be dissipated as radiated wave. You couldn't explain "energy disappearing from the trace" in a model that things of the signal as current on the trace alone.)

What you do need to do is understand the signal as the changing magnetic field around the conductor, and the changing electrical field between the conductor and ground (or, e.g., its differential complement). Now, Maxwell's Equation link these two: The time-derivative of one field always inherently leads to a rotation of the other. And vice versa!

The fact that this is mutually linked physically means that the change in time of one field leads to a change in space of the other, and vice versa: You causing a current here means you get an electromagnetic field over there, a bit later.

The a bit later is the effect of the factors between the sides of the differential equations described above. In vacuum, that's actually the speed of light!

Now, back to the trace on the PCB: Say, it's a (so-called) microstrip line above a ground plane. Now, because that ground plane is (sufficiently well) a perfect conductor, there cannot be an electrical field within the ground plane (right? if there's an electrical field and something that conducts is in there, a current flows. If you have perfect conductor, an infinitely large current flows instantly, eradicating all the reason there could have been different potentials), and your differential equations above get boundary conditions that say "Hm, OK, so if there's an electrical field in parallel to the surface of the metal, there must be one right inside as well, else we get an infinite difference of energy in a finite (or even zero) thickness, and physics don't like that kind of incontinuities". So, there cannot be a parallel electrical field to the surface of the ground plane. That in turn says you only get that as normal field, pointing towards the conductor in which your current flew.

Now you have vertical electrical field lines, meaning the magnetic field makes "circles" in horizontal planes. Whenever the voltage difference between conductor and ground reduces, the magnitude of the electrical field reduces by the same amount. So does the magnitude of the magnetic field "circles", but: delayed! (same phenomenon as vacuum speed of light). The longer-lasting magnetic curls cause an electric field opposing the original one, again "delayed", and you end up with an alternation of strong electric vertical/weak magnetic circles and strong magnetic circles/weak vertical E-field along the length.

Now, you can influence the speed at which this alternation changes – which is actually the speed at which the signal travels along the trace – by defining thickness and shape of the trace. It turns out that for many useful applications, you will pick it such that in an average glass fiber board, your speed is roughly 2/3 of the speed of light, so 2·10⁸ m/s. (too lazy to convert to ps per inch.)

But: that's really just a thing you'd end up after intentionally designing the trace to be guiding waves in their fundamental mode, with low losses, in the usual board materials. This can, and does, look different for high-performance (RF-rated) ceramic boards, and transmission lines that do not have anything more complicated than the "alternating vertical/horizontal 1:1" setup described above.