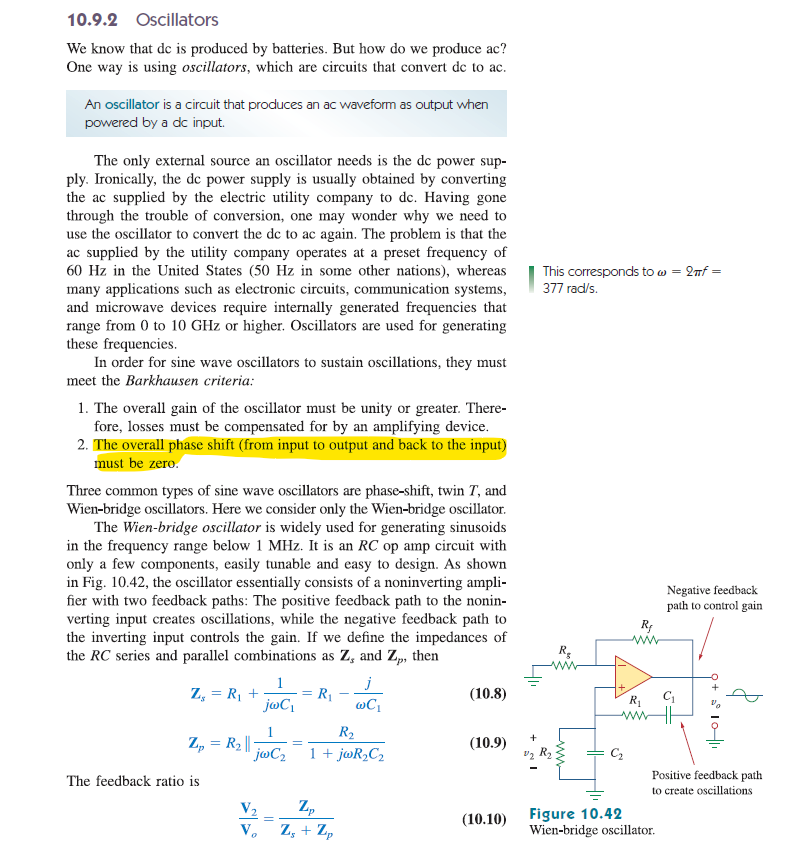 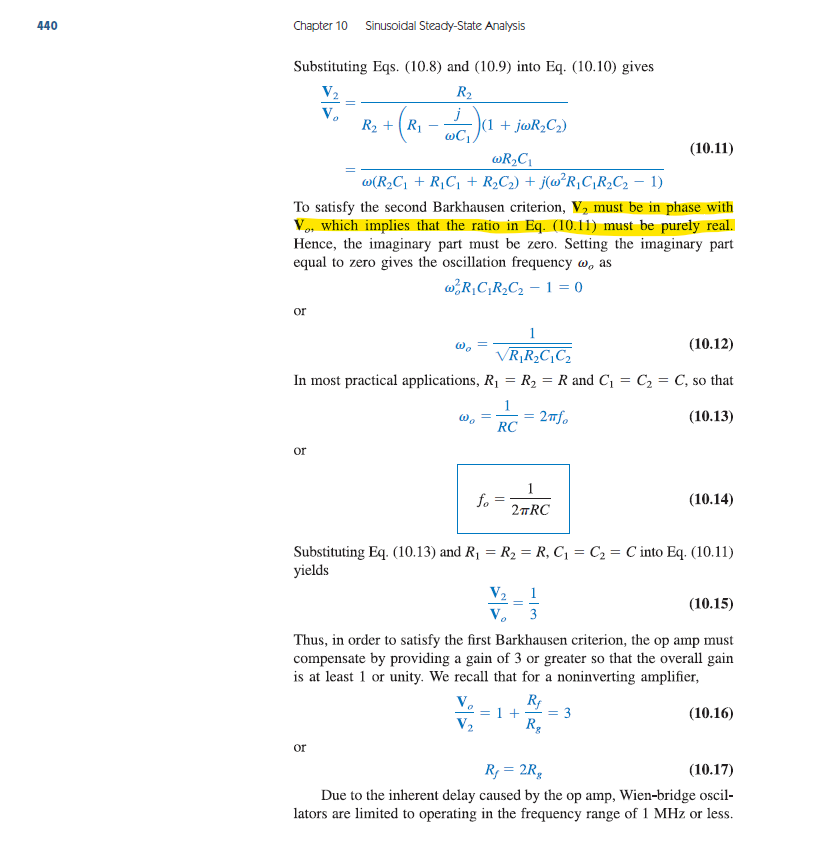 First question - Why does the Barkhausen Criterion state the total phase shift from input to output and back to input have to be zero? I thought the loop gain phase shift was supposed to be -180 for oscillations to be sustained?

Second question - what exactly is the 'input' here? It's an oscillator. Why are they so interested in the voltage v2 ? It's not an input?

Why does the Barkhausen Criterion state the total phase shift from input to output and back to input have to be zero?

I thought the loop gain phase shift was supposed to be -180 for oscillations to be sustained?

Why are they so interested in the voltage v2 ? It's not an input?

Every oscillator like this has an explicit output and an implicit input to which is fed back the phase shifted signal. That input is marked by v2; it is the non-inverting input referred to earlier.

When considering negative feedback systems such as sine wave oscillators, amplifiers and control systems with regard to stability (loop gain and phase) it is best to consider sinewave oscillators separately to amplifiers. 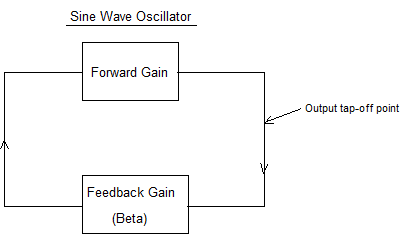 As can be seen from the block diagram, a sine wave oscillator is a closed loop. There isn't really an input or an output but the signal can be tapped off from the right hand side as shown.

It is possible to understand intuitively how a phase shift around the loop of 0 degrees, 360 degrees or 720 degrees etc when the gain around the loop is 1 (unity) leads to the returned signal around the loop arriving back where it started in phase and of the same magnitude. Hence a stable steady amplitude oscillation is achieved.

In the case of the wien oscillator the feedback gain is 1/3 which means that the forward gain must be set to 3 in order to achieve unity loop gain. 1/3 * 3 = 1

Intuitively it is possible to see how a loop gain greater than one with loop phase of zero degrees causes the signal around the loop to arrive back where it started and add to the amplitude, increasing its level.

Now consider an amplifier which can be considered in a similar manner to a generalised control system.

Now for the amplifier, instability occurs when the loop gain is 1 (unity) and the loop phase is 360 degrees, but for the amplifier the whole loop includes the summing junction. The summing junction on its own has a constant -180 degrees inversion. This means that the Forward gain and Feedback gain would require a combined phase lag of -180 degrees in order to achieve the full 360 degrees lag necessary for instability.

For a sine wave oscillator, at the frequency of oscillation, the loop gain will be unity and the loop phase will be 0 degrees, 360 degrees, or 720 degrees etc. This point is referred to as marginal stability and it is right on the border line between negative feedback and positive feedback occuring. Although for a sine wave oscillator steady amplitude oscillations occur at this point.

For an amplifier type system, a loop gain of 1 (unity) with a whole loop phase lag of -360 degrees is also referred to as marginal stability which is also right on the border between negative feedback and positive feedback occuring but, as already mentioned, in an amplifier type system, the point of marginal stability leads to theoretical infinite amplitude.

0
Working of RC Phase shift Oscillator?
2
Barkhausen criteria: which is the overall effect if only the magnitude criterion is met?
2
How does Wien bridge oscillator work
0
Wien Bridge Oscillator
4
Colpitts oscillator : having trouble while respecting Barkhausen criterion, is this criterion insufficient there?
0
Regarding RC Phase Shift Oscillator
1
What is the difference between Input signal and input voltage?
1
Diode and capacitor at the Wien Bridge Oscillator
0
Phase shift oscillator: confused about phase shift per stage?