I got these schematics from an arcade game released in 1983.

These two circuits are responsible for generating two different sounds even though they look very similar.

Second one (sounds like a fart, sorry for the lack of better word) 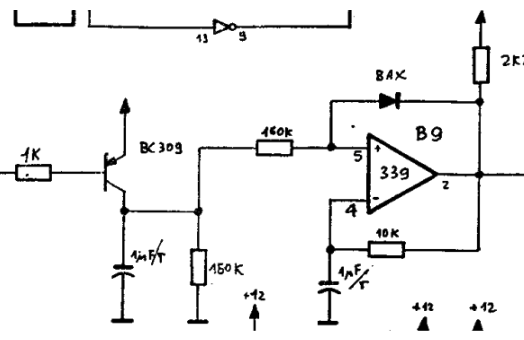 These were manually designed so I am trying to "reverse engineer" the logic.

The second one seems like a comparator that will trigger after a delay and then generate a series of distinct peaks in the output. The input triggers the charging of the capacitor, the output voltage split more or less in two, compared, and boom.

The first one has 2 JFETs in Darlington(?) which should just amplify the other sound. I tried simulating them in CircuitLab but the chart doesn't seem to be meaningful at all.

What is going on? How do I learn to "read" this? My plan is to add these to the game emulation available in MAME.

made with FREE microcap v12.

And here is the behavior of the second circuit ... which can also be "cut" "logically" at 0.4 s for a "shorter" wave.

Not the answer you're looking for? Browse other questions tagged operational-amplifier sound or ask your own question.

0
Purpose of the diode in this comparator circuit