How to decrease distortion and efficiency of this circuit?

How to achieve efficiency of more than 70% and decrease the distortion of the circuit to 0.1% in THD, without affecting my Vpp=30 with the circuit below with both in 1k and 6k frequency of Vs?

Update Also, I only have this component available, and I can only make this kind of design in the project that was taught in university. I am also working with 10W speaker.

If not I would like to theory behind it 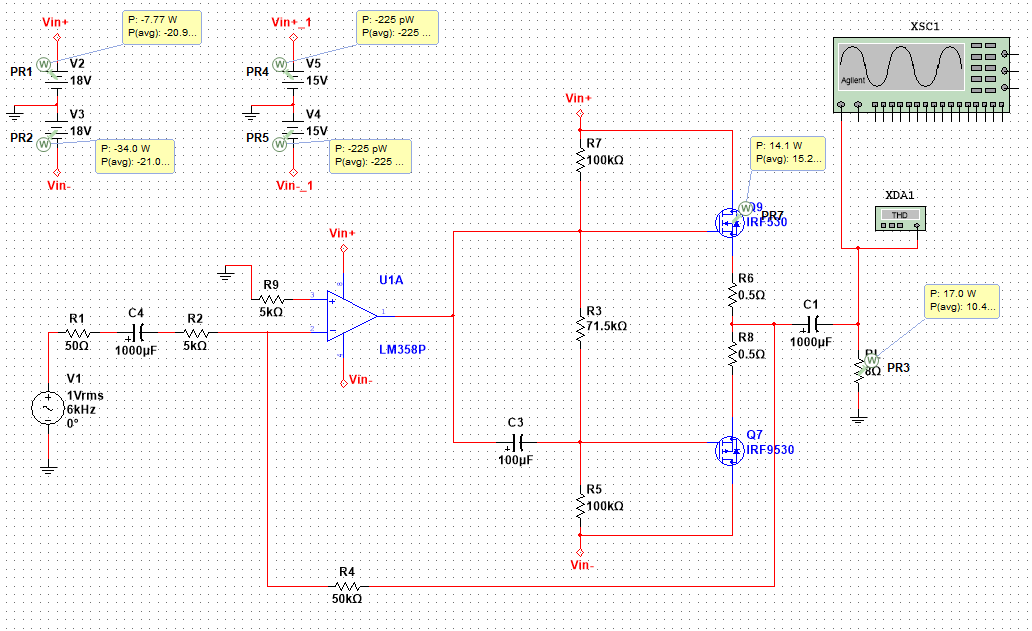 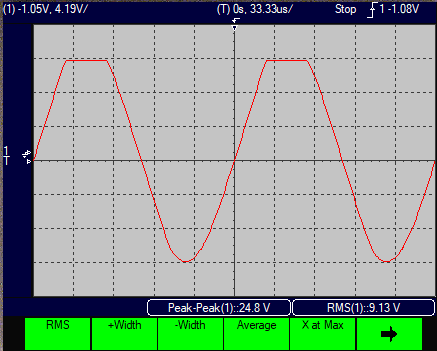 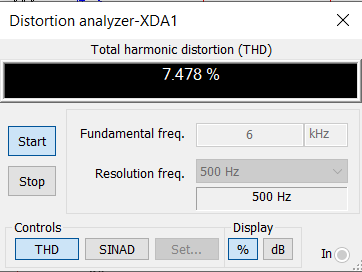 How to achieve efficiency of more than 70%

The efficiency of a class-AB amp doesn't really depend on the schematic. With power supply +/-Vcc and output voltage Vout, then the amp will burn a power Iout.(Vcc-Vout) as heat in the transistors and source resistors, and Iout.Vout is used as useful output power. So if you want higher efficiency, use a lower power supply voltage.

Another way to increase efficiency is to design the amp better, so it delivers less distortion at low bias current, so the transistors burn less power when they do nothing. However this is only relevant when the output signal is small enough that the amp stays in the class A zone of class AB. It becomes irrelevant at mid-high power, because it goes to class B, and at this point it spends little time in the class A zone.

In conclusion, efficiency depends on power supply voltage across the whole range of power, and on bias current at low power (or idle).

and decrease the distortion of the circuit to 0.1% in 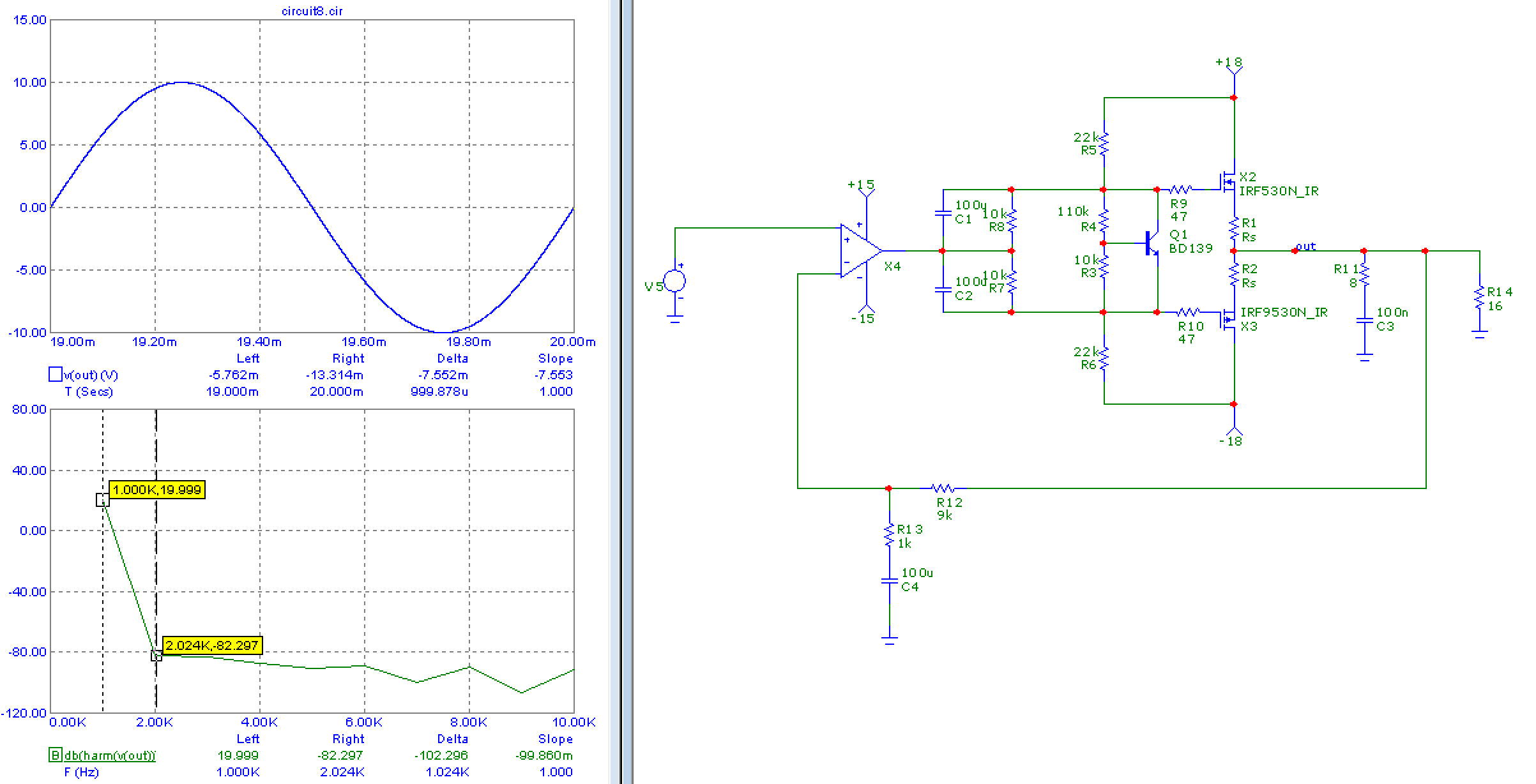 First thing is to add a Vbe multiplier to bias those MOSFETs. Without it, they'll go into thermal runaway, so it is absolutely necessary. This is because the threshold voltage goes down when they get hot (negative tempco) which increases idle bias current, which makes them hotter, and this goes in a loop until the idle bias current goes out of control and smoke gets out. This is especially important with small TO-220 transistors, which get hot really fast.

Unfortunately it is not possible to know the Vgs_th tempco without measuring it. For example IRFP140/240 have -4-6 mV/°C total, P and N channel combined. Assuming this will be the same here, I add a Vbe multiplier.

This multiplies the transistor Q1's Vbe by a ratio R4/R3. Note R4 and R3 should be a potentiometer. Since Q1's Vbe has a tempco around -2mV/°C, once it is multiplied by about 10 to get the correct gate-to-gate voltage to bias the MOSFETs, this will have -20mV/°C, which is too much.

However, even if it is placed between the power devices on the heatsink, the transistor gets much less temperature rise than the MOSFETs themselves, because the heatsink is doing its job and dumping that heat into the air. That somewhat compensates for it, but be warned this circuit will overcorrect.

It is possible to get a much more accurate bias current by putting two Vbe multipliers in series, one of which is not on the hear sink (Q2). 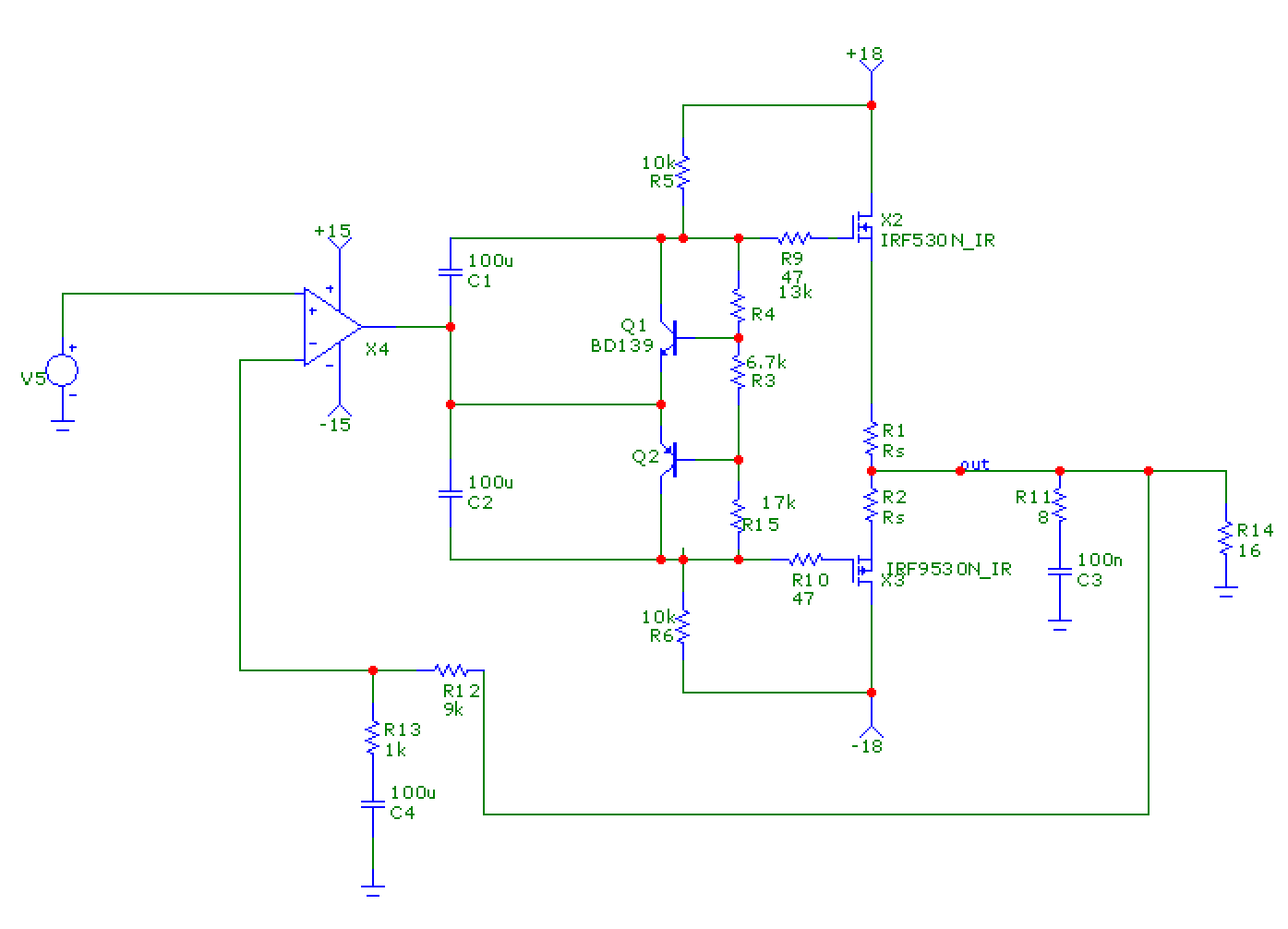 Next, we have DC. It is not a good idea to AC couple the output of the opamp to the gates, as you have done, because then the DC operating point of the output stage is not fixed, and you need an output capacitor to get rid of it.

So in the first schematic of this answer, R7-R8 do this job. In the second schematic, the Vbe multiplier transistors do it as a side job.

Then feedback wraps around the whole thing, and we get a bit more than 0.1% distortion at 1kHz.

It will be difficult to go lower by using an opamp, because the opamp does not offer flexibility in custom compensation scheme, which are the secret sauce for low distortion, as they allow a much higher open loop gain to be used for correcting distortion in the output stage.

I set the source resistors to 0R22 and idle bias current to 20mA.

You have no control of the Vgs and resulting current of MOSFETs. Some will be with a massive current and in class-A, some will be turned off and producing extreme crossover distortion in class-B and maybe a few will be in class-AB with low distortion and efficiency as high as 65% at high power. All amplifiers have negative feedback that reduces distortion but yours has none. Your schematic has its parts so far apart that everything looks tiny and hard to see. 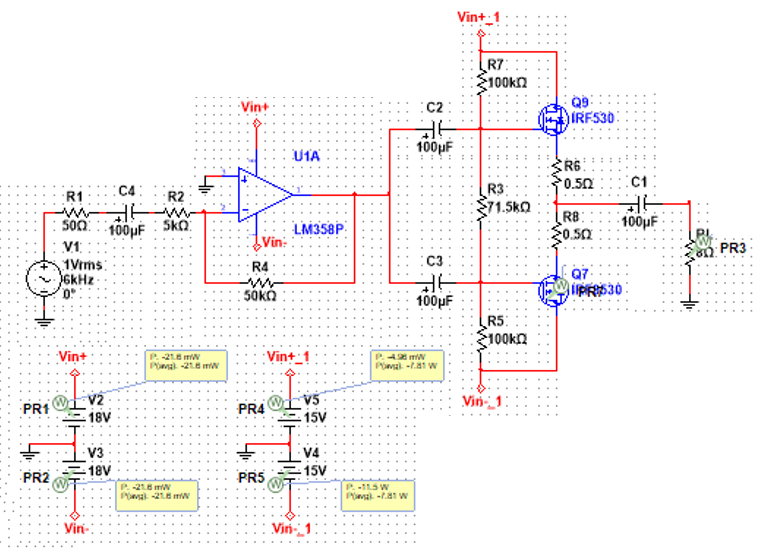 A couple of ways that you can reduce the distortion:

Doing this should get the distortion under 1% in simulation. I just threw together a quick circuit in LTspice and got 0.99% distortion at 30Vpp, 6KHz using \$\pm\$18V for the output supply and a TL084 type opamp. I biased the MOSFETS at around 800uA.

I'm sure there are other things that could be improved, but try some of these to start.

You removed C2 that totally messed up the symmetrical biasing of the Mosfets. Put C2 back. 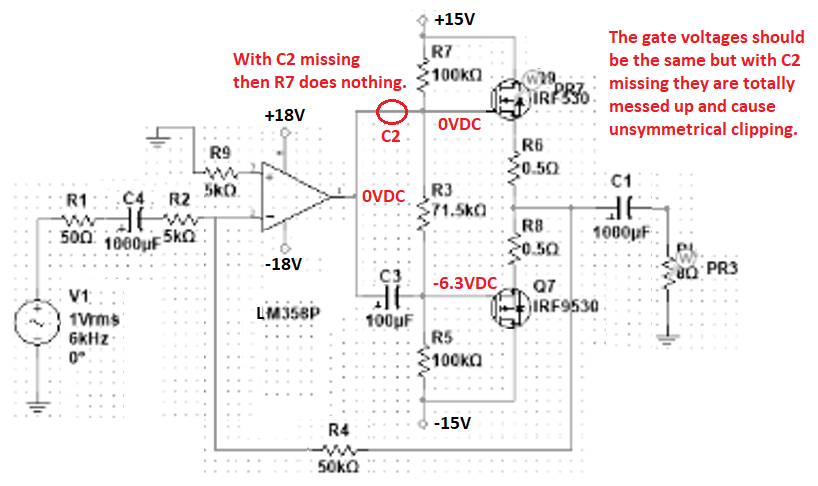 Not the answer you're looking for? Browse other questions tagged operational-amplifier transistors audio push-pull or ask your own question.