Is reverse polarity protection this simple?

I am working on a PCB design and need help understanding reverse polarity protection. The board will be powered with a 12V 5.4A power supply via barrel jack.

I am planning on using this chip because according to my (admittedly new) understanding of reverse polarity protection circuits it should work for this without the need of a zener diode and resistor. The GS rating is 30V and the VGS(th) is at -4V which is below the supply voltage. So with these being true, the protection circuit should work just like this right? I want to check because it seems most example circuits use the diode and resistor so I am worried I'm missing something that makes the MOSFET-only version impractical for most uses. 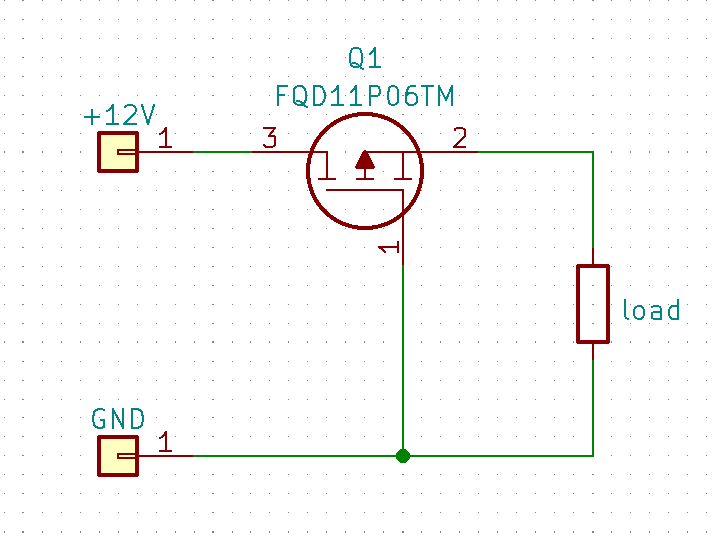 For the case of a well regulated 12V input powering a single resistor, then yes.

If your 12V source might ever have spikes (perhaps at plug in time) that exceed the (usually 20V) VGS rating on your MOSFET then you need to add protection for the gate.

Also if your device has any other wires coming out of it that connect to anything else, then you need to consider any current paths that might take place through those connections if your ground lead were at 12V.

Almost. To make these somewhat reliable you need a bit more refinement. Some protection in the form of a zener diode protecting the Vgs is required. The are lots of application notes on this, for example:

Also note that the mentioned application note goes into quite allot of details around transient events. That is perhaps the drawback of this method - passing regulatory testing will probably require even more refinement. (Or: In other words: Is your 12V on a long cable? Outside? Connected to anything else? Then a simple circuit might have reliability issues)

A single diode would suffice for reverse-polarity protection.

As others have said, your circuit would work for reverse protection under ideal conditions, but might not work under real world conditions. For real conditions, an ideal diode IC (such as the Analog Devices LTC4372) might be worth considering: 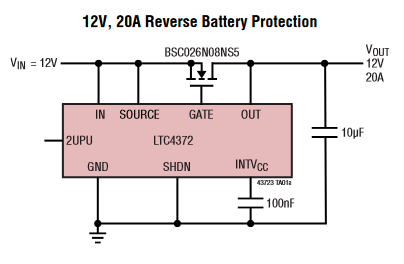 The ideal diode circuit gives you the benefit of reverse protection, a very small voltage drop across the MOSFET, and protection for the MOSFET by regulation of the gate voltage. The IC has a low current draw, a wide voltage range (IN can survive -28 V to 100 V for the LTC4372), and aren't that complicated.

As others had mentioned, a TVS diode is always a good idea if the circuit will be hot plugged.

You have a (presumably dedicated) power supply, which is a lot more benign a source than, say, a vehicle “12V” power source. Nevertheless transients are possible. A TVS across the input would probably be enough (a bipolar one would prevent the TVS from frying in case of reverse voltage applies). I say “probably” because 30V >> 12V so there is some headroom for the TVS to function if we assume whatever’s improperly supplying overvoltage is limited in current. If it might be plugged into a car you need more robust protections.

Secondly, the number you should be looking at is not Vgs(th) unless you only need a few microamperes, but the Vgs at which Rds(on) is guaranteed (you’ll have to adjust the datasheet Rds(on) number upward for elevated temperature). Vgs(th) of -4V means it will drop 4V when passing only 250uA, which is more like “almost off” than “on”.

In the case of that particular MOSFET, Rds(on) is guaranteed less than 0.185 ohm at 25°C, so maybe less than 0.3 ohm when hot, with a Vgs of 10V. Since 10V < 12V, we are okay there for nominal input. That’s a pretty high resistance and if you pick a MOSFET that requires a zener and in SMT you can easily get less than 1/10 that loss, and for less cost. Maybe limited to blocking 20 or 30V though, rather than 60V.

Another factor that is often ignored is behavior in brownout conditions- you should ensure the MOSFET won’t overheat regardless of the input voltage- this is a particular concern with battery and vehicle sources. The body diode Vf would be of interest here, as well as the exact behavior of the load.

As others have noted, a TVS is a good idea for most practical situations (hot-plugging a capacitive load). (Note that the -CA is a bidirectional TVS, limiting reverse transient voltage as well.) An alternative, as well as for higher voltages, is to clamp just the gate voltage: 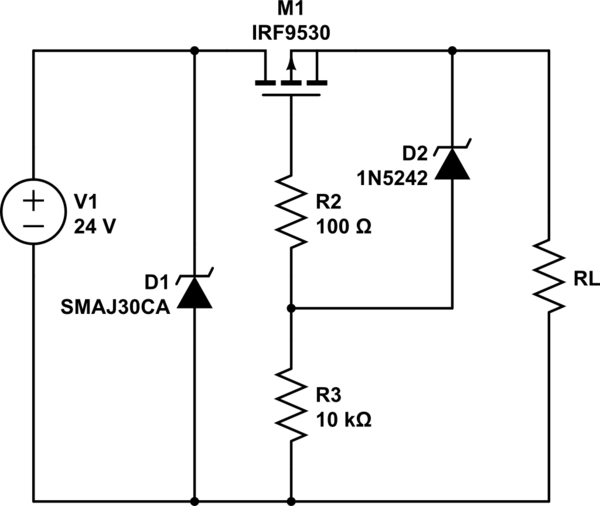 LC filtering components may also be of interest, particularly if the source or load (or both) is fairly noisy, and/or the cable is relatively long and unshielded (i.e. an effective antenna).

I have decided to use a mosfet with the resistor and diode as it allows me to use a much more efficient mosfet and the cost difference is really negligible. Thanks everyone. I definitely understand exactly what this circuit does a lot better now.