Is my summary of parasitic oscillation in op-amps wrong?

We were discussing negative feedback in op-amps with my community college instructor. I tried to learn ahead about the concept of parasitic oscillations in feedback circuits. I wrote a summary of what I learned, but my instructor said (very respectfully) that it looks to them like the wrong understanding. They were not exactly sure what is the right way to explain parasitic oscillation, but they said they'll get back to me on that.

I wonder if my summary is correct in general, and if it is are there points that are either not exactly right or could be improved upon?

Thus what looks like a negative feedback circuit may begin to oscillate spontaneously, if there exists a frequency (and there usually does) high enough to undergo a 360 degree phase shift at the hand of the capacitative properties of the circuit's transistors, such that a chance distortion in voltage beyond the steady state, instead of ebbing back into the DC steady state, converts into a high frequency signal, that goes in a loop and feeds on itself (while possibly getting stronger at each turn in drawing power from the amplifying stages on its path). What, in particular, makes such an oscillation sustainable is that at each cycle the voltage coming back to the input is not smaller than the voltage which had left it, such that the next cycle is not weaker than the previous one (and possibly stronger if, at the end of the cycle, after undergoing a 360 degree shift and returning to the input, the return voltage is greater than the input voltage at the beginning of the cycle of which it had originated).

Sometimes, one should consider that an electronic" circuit is not only made with passive and active devices.
An important "device" to be taken into account is ... physical "delay".
And significant phase shifts can then be added ...
Although, it is not very "big" (some ns), it can become very important, and can lead to some "instability" or "oscillation".

Here is an example of illustrating that "thing".

With the Bode diagrams.

As asked by OP, I add the waveforms when the amplitude generator = 0.
NB: sometimes, the system can "hang" and change its behavior (why ? not found until now).
It starts oscillating alone (no generator) when the delay is greater than 145 ns.

I don't think your explanation is wrong, but I do think it's incomplete.

Key to understanding parasitic oscillation and it's mitigation in op-amps is to understand that an op-amp is a multi-stage amplifier.

So applying negative feedback to a single stage amplifier will not generally cause oscillation.

However if we build a multi-stage amplifier where all the stages have a similar frequency response and then try to apply negative feedback to the amplifier as a whole then each stage will create a phase offset of 90 degrees and the amplifier will almost-certainly oscillate.

To mitigate this, op-amps have extra capacitance added so that one stage has a significantly lower bandwidth than the other stages. This way, if the op-amp is used as intended the gain in the feedback loop drops below 1 before the phase distortion from the filtering gets too high.

I have never come across a satisfactory intuitive explanation of amplifier instability in any book or on any website. What follows below is my own attempt at providing one.

Consider a standard non-inverting amplifier as shown below. 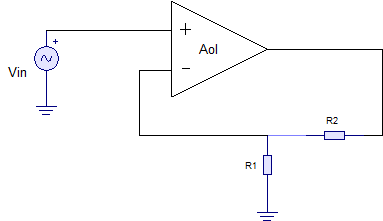 The almost universally accepted way of assessing and setting stability margins in such an amplifier is to open the loop, apply a signal to one side of the break and measure the opened loop signal being output from the other side of the loop. In this way the opened loop response is determined as shown below. 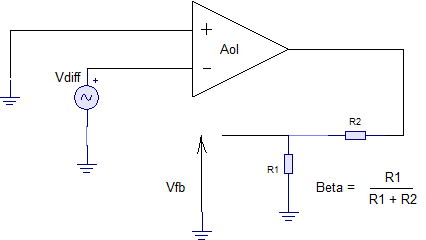 The opened loop response phase and gain can then be measured as a frequency sweep is implemented.

At these values for open loop gain and phase the phase margin and gain margin will be quite low and the above analysis explains the peaking which occurs in the frequency domain at top end of the amplifier's bandwidth at low phase and gain margins.

Now the phase and gain margins will be even lower and there is even more peaking in the closed loop response. As the open loop gain gets closer to a value of one at -180 degrees lag, the amplifier is moving closer to instability.

Now let's consider the situation where the open loop gain has a value of 1 at -180 degrees lag.

In this situation, no matter how large the closed loop gain becomes, the amplifier cannot satisfy its open loop gain characteristics. The amplifier cannot make Vfb equal to Vdiff. Vfb will always be smaller than Vdiff no matter how large the output becomes. In fact if we were to make the amplifier's input signal equal to 0V (ground it) then the small amplitude noise present at the input will still theoretically cause infinite closed loop gain that, in practice, would be limited by the power rails.

I think your explanation is correct, if wordy, but it misses an important point.

Circuits oscillate because they are built as oscillators. The basic requirements for what makes a circuit oscillate are well known and apply equally to any circuit with gain.

Nature doesn't care whether we intended the circuit to be that way or not. We sort of "dismiss" the Nature by calling such unintended oscillations "spurious". They are only "spurious" from our simplistic point of view, driven by the desired functionality. We didn't design an oscillator, but we got one. We didn't build the Oklo reactor, but it happened anyway.

The simple schematic we draw of the circuit is not representative of reality. We don't even draw our op-amp symbols to capture the critical properties of the part - just a triangle and a part number.

Now imagine if the schematic was littered with manufacturer part numbers for passive parts (R,L,C), instead of nominal values. It wouldn't be very usable. Yet we do this to the op-amps: the basic parameters like GBW, critical phase margin and frequency, and so on - are not captured. Op-amps are shown as very simple symbols that represent complex circuits.

The discrete parts in our circuit aren't simple either: poor layout, long wires in solderless breadboards, and other physical aspects of the implementation create a slew of components we conveniently leave out of the schematic. Those are real, measurable circuit elements.

The fact that the amplifier oscillates is one way to measure an equivalent lumped-component model of the feedback path that causes the oscillation. We have the reality right in front of our eyes, so to speak, ready to be quantified and fixed to get what we need.

In the end, spurious oscillation in amplifiers is a failure of our modelling - the circuit diagram misses the parasitic impedances that are present in the physical implementation, as well hides the implementation details of gain stages that matter quite a lot for the behavior.

Instead of calling oscillations "spurious", we could instead call our circuit diagrams "spurious", in a way :)

Not the answer you're looking for? Browse other questions tagged operational-amplifier amplifier oscillator feedback phase-shift or ask your own question.

1
How does two inverting op-amps phase cancel eachother out?
2
Barkhausen criteria: which is the overall effect if only the magnitude criterion is met?
2
understanding oscillation in op amp circuit
0
Loop gain less than one is stable
0
Crystal Oscillator Power
1
Stability at loop gain <1 and 180 degree phase shift
0
Regarding RC Phase Shift Oscillator
1
Two Stage CMOS Operational Amplifier
4
Why is there no frequency compensation required in TI's TL494 example buck regulator design?
3
Wien-Bridge Oscillator