Why is a non inverting unity gain opamp's output not zero all the time?

The input is continually summing with its negative through negative feedback, so it must become zero on the output. Why is the output not zero then?

As we know g is very high and c must become zero.(The calculation is wrong, devnull, Andy aka)

There is a g missing in the equations:

As g tends to infinity, a tends to c.

You have made a mistake in your math but your first statement is correct: -

And here's where you went wrong because this expands to: -

There is no absolute zero: the amplifier doesn't know what zero is.

The amplifier does only one thing: amplifies the difference between the (+) and (-) inputs by a large gain, and puts it on the output. You then provide feedback that utilizes the large gain to do what you want.

With direct output-to-(-) feedback as you show, the action of the amplifier becomes to bring the difference between the inputs very close to 0V. The absolute voltage on the (+) pin is called the common mode voltage, and it can be arbitrary, within the limits provided in the datasheet specifications. In a voltage follower, the common mode voltage is replicated on the output.

More specifically: in a voltage follower, the difference between the (+) and (-) inputs is zero when the output, shorted to the (-) pin, is at the same voltage as the (+) pin. Thus, since the action of the op-amp is to null the difference between (+) and (-) when stable negative feedback is present, the (-) input will follow the (+) input, and the output is simply shorted to the (-) input, so it has to follow the (+) input.

If one were to assume a practical op amp would only be used in circumstances where external feedback effects were instantaneous, its behavior could be described as:

While op amp behavior is often described as being a linear function of gain, many op amps are in fact decidedly non-linear in their behavior and in fact behave in a manner more like the above. In cases where the inputs are only minimally different, the output may swing slowly, but unless the inputs are close to each other the output swing rate will be essentially independent of the difference between the inputs.

What's important to note with an op amp is that if the feedback is instantaneous, the output will stabilize at the positive rail, bottom rail, or a point which causes the inputs to be at most trivially different. The only behavioral aspects that will be affected by op amp characteristics will be (1) what level of difference is "trivial", and (2) how quickly the op amp's output can swing. Provided that #1 is small enough and #2 is fast enough to satisfy an application's requirements, there will be no need to do any further analysis of the op amp's behavior.

Many people who use op amps for audio circuits assume a linear model, even when using an op amp like the 741 whose behavior is more like the above. This has led to the saying that the 741 is uniquely suitable for taking an absolutely beautiful pristine audio signal and ruining it. On the other hand, the simple three-way analysis above makes it easier to predict the behavior of some op amps than would the linear model.

What is the basic idea?

First of all, you need to find out what the hell this is all about... what the basic idea is here... and not just in this electrical implementation. Because it is a great idea that we can see all around us and we ourselves constantly realize it in various life situations. That is why I prefer to call it by such figurative names as "principle of life" and "active copying" rather than by the generally accepted "negative feedback".

The problem solved by this idea is simple - to make a quantity Y (Vout here) equal to another quantity X (Vin)... but it is realized in a complex way:

First Y is produced by another (different from the input) source (Vcc), then it is compared by subtraction with X and finally changed to the correct direction until Y = X (Vout = Vin) is reached.

In the circuit of an op-amp follower, Vout is produced by a properly supplied op-amp, and the two voltages Vout and Vin are subtracted by contrary connecting them in series. The result of this subtraction is a "floating" voltage Vout -Vin that requires an op-amp with a differential input (take a look at this Wikibooks story in which my students "invented", step by step, the op-amp follower and then turned it into an amplifier).

It is interesting that this idea was invented and implemented in electrical form a long time ago - in the 19th century. This made it possible to make an "ideal" voltmeter without any electronic gadgets such as transistors and operational amplifiers. In my story "Ideal" voltmeter (for now, only in Bulgarian), I have told in detail how together with my students I reproduced this famous experiment in the laboratory in order to show the power of this idea. Here are three pictures from the story: 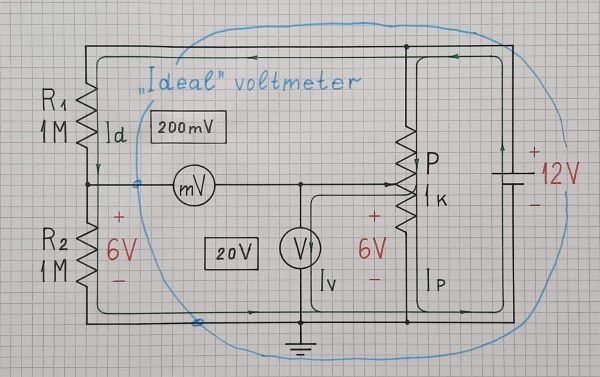 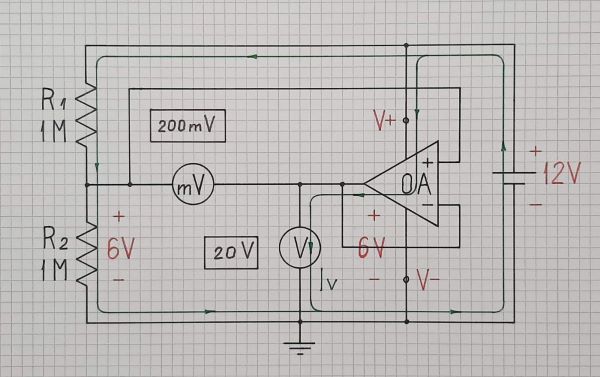 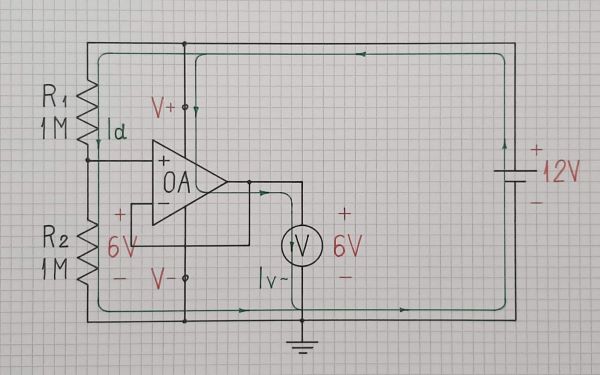 In contrast, in the circuit of an op-amp inverter, the two voltages are subtracted by a 2-resistor summing circuit. Its output voltage is referenced to ground; so the op-amp input can be single-ended.

The benefit of all this is that the load (next stage) will consume current from Vcc and not from Vin. Vout is a "powerful copy" of Vin, hence the name "buffer" or "booster".

EDIT: What does the op-amp actually do?

But when c=a then c=g(b-at) became 0*inf and must be clarified. How OpAm handles (regulates) this subtraction to outcome a replicate?

This topic is often discussed in this forum and good classic explanations are given. But now I will present a new intuitive explanation of the transition process, which came to me a while ago in response to your comment (thanks!).

Let's define two types of op-amp gain, which we can figuratively call dynamic and static (or, if you prefer, measured and actual).

The dynamic gain is determined by the ratio of the output voltage to the input differential voltage (between the two op-amp inputs) at some point in time. Due to the op-amp inertia (although very small) it changes in time from zero (at the beginning of the transition) to the value of the static gain (at the end of the transition).

The static gain determines the ratio of the output voltage to the input differential voltage (between the two op-amp inputs) at the end of transition. This is the gain given in the op-amp datasheet.

Now we can explain the op-amp behavior. We can imagine it as a control system that (like everything in this world) seeks to reach the equilibrium point. What is it?

The op-amp reaches its state of equilibrium when the dynamic gain equals the static gain.

Other than that calculation mistake(mentioned by devnull and Andy aka), you need to consider the model more accurately to understand the question: Does it really subtract input from output or not. The OpAmp model (by unity feedback b=1 and g=inf): 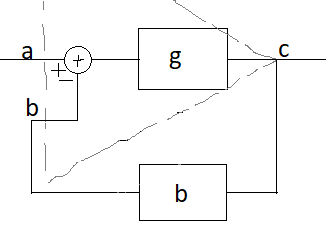 Assume we have input at a. As you can see, this feedback model can't really achieve this direct cancellation of input with input-input=0. To dive more into the problem, load in your mind two system, feedback and feedforward: 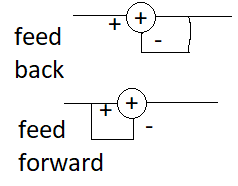 Assume input is in left path and out is in right path of above picture. In feedforward it's straightforward: out=in-in=0 (zero at all time) But in feedback case, output is: out=in-out=...=in/2. Assume initially we have zero everywhere in above picture we don't have opamp so we don't have infinite gain. Now: Input signal becomes 1, input can't be zero anymore, the output must become something which it's difference from input being equal to output, to not cause difference change. Yes, it must be 1/2 which is compatible with out=in-out=...=in/2.

In feedback scenario (in first picture with opamp model), you can only reach zero output if make feedback gain b=inf and feedforward gain b=inf. ( in this manner the special zero will be created on c instead of before g block)

Now, does really unity gain opamp subtract input from output or not. Ans: Because g is inf a must be really close to b, otherwise output will saturate to rails. this is why we always assume voltage of a is equal to b. The for the sake of b=1 c also must be equal to a. Ans the more the g is, the more c will be close to a. Since larger g means a need to be more close to b.

The OpAmp model is feedbacked one, and you can only reach output being 0 all the time by using another OpAmpinstead of b block in OpenLoop state.

Not the answer you're looking for? Browse other questions tagged operational-amplifier negative-feedback or ask your own question.

-3
Op-amp with both inputs the same doesn't output zero