How are power amplifiers linear? Although they have some distortion they are still considered linear.

I tried referencing many materials, but I couldn't find an answer. The characteristics of transistors are non-linear for large signals and hence the output waveform for say a sine wave should be some mixture of sine and exp - but we don't see that.

Expanding on my earlier comment... When there is excess gain available, NFB (negative feedback) is used to greatly improve linearity with non-linear devices and structures. (The following is from some old notes I'd saved. And yes, it's late to the game, as you have accepted an answer, but I don't care.)

And now take 10% of the output and feed it back as NFB. The resulting equation is:

And that's the effect of just 10% NFB applied to an exponential curve.

NFB will do that to ANY equation. Let's grab a different one:

That's got to be a mess, right? An exponential of a constant plus a sine wave?

Note that the sinusoid is nearly recovered from the non-linear mess! (This fact alone can be quite important for audio.)

Take ANY equation you want and feed back some fraction of the output as negative feedback, back into the input variable, and the resulting equation is moved towards linearity.

For audio amplifiers, from this link, this is a "try" for one technique used in the pre-driver stage.
NB: here without feedback.

Made with microcap v12. Link to file test.

And for low level, no "cross" distortion.

The "input" is in black, the others are for a change in gain. Higher the gain, "smaller" the non-linearity.

In a circuit, the transistors can be under several sets of conditions, which influence the amplitude and nature of the distortion being generated. If you were to look at the transfer function of a circuit, plotting input on the X axis and output on the Y axis, the more it looks like a straight line from input to output, the less total distortion. But the sharpness of any bends or kinks in the transfer function (its second derivative, to be more accurate) determines the order of this distortion.

A smooth transfer function with low second derivative, looking somewhat like a portion of exponential or a parabola (left) will generate low-order harmonics whose amplitude decreases as signal amplitude decreases. This is typical of small signal class-A stages.

However a transfer function with sharp bends or kink (right) will have higher second order derivative, and will generate more high-order harmonics that are more difficult to get rid of with feedback due to falling open loop gain at high frequency. If the kink is near zero amplitude, then the distortion amplitude won't necessarily decrease with decreasing signal amplitude. This is typical of class-AB or class-B stages.

So, your transistors can be used in:

But there are also: 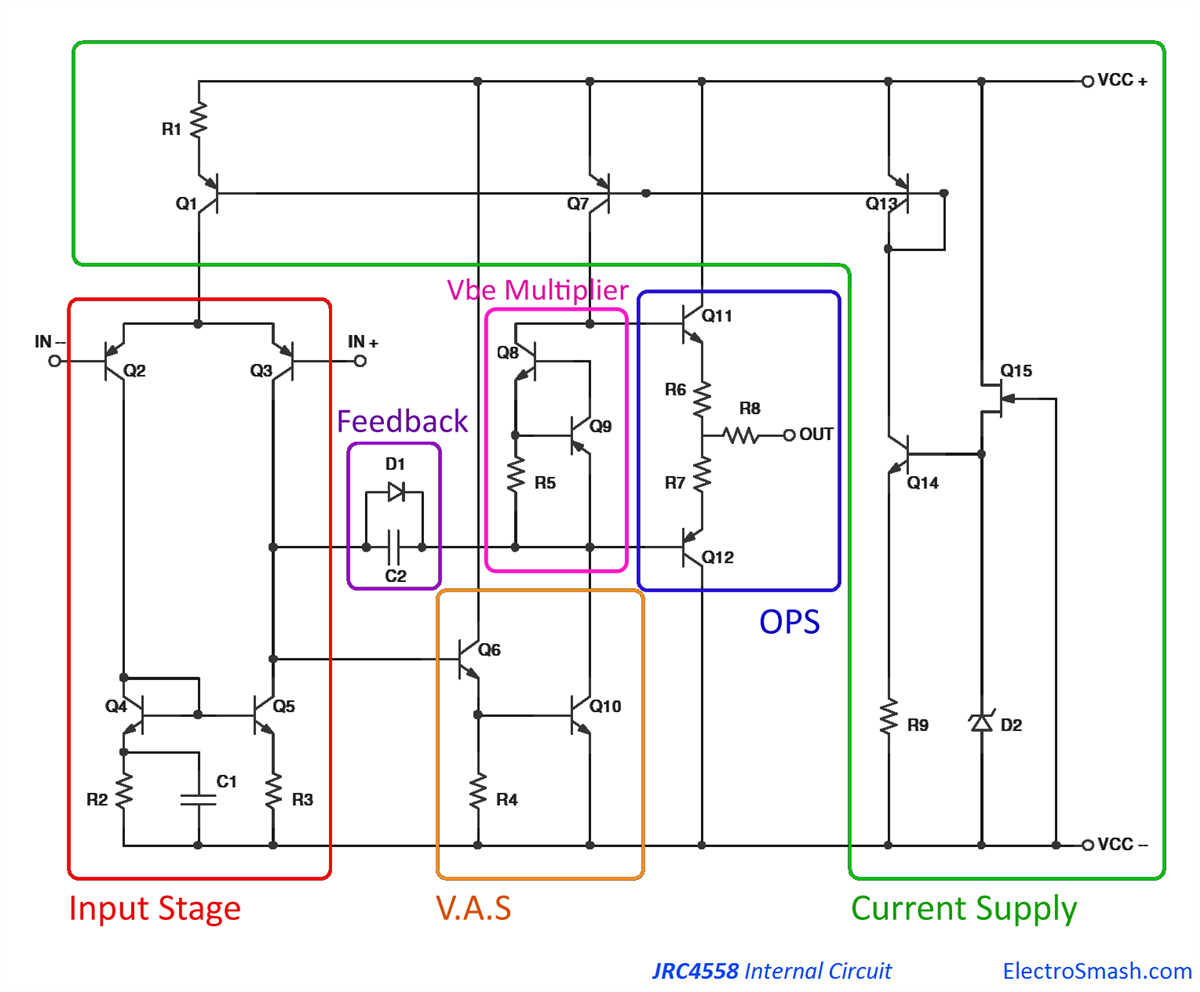 In this circuit, unless the opamp is clipped or slewing, the high open loop gain means the input signal of the input stage is tiny. So Q2-3-4-5 work under small signal conditions, at least for current.

Q2-3 Vce can vary quite a lot if the opamp is in non-inverting configuration, which introduces a bit of low-order distortion. Some opamps fix this by adding a cascode to the input stage.

Since S2-3 have no emitter resistor, the transconductance of the input stage will be a tanh function, only linear near zero input signal. This type of input stage works best on small signals, which means it requires large open loop gain. If the signal has too sharp edges, using a significant proportion of available slew rate, or is at a high frequency relative to the available bandwidth, then the input stage will have to output more current to charge compensation capacitor C2. This requires a larger differential input signal, which causes an excursion out of the linear center part of the tanh characteristic, and thus more distortion.

Q10 also works as current gain stage, with large voltage swings, so it will show the effect of varying hFe with Vce and self-heating. This

The output transistors Q11-Q12 work under large signal conditions because in normal use, they are expected to turn off as the output stage goes in class-AB. In addition, they see large current swings, so it is important the transistor has hFe constant enough with varying current.

The output stage is usually the largest source of distortion in the whole amp, simply because it is the only part that works under large signal conditions. All the other transistors work in class A. The only way to mitigate that is to remove the emitter resistor to get a better transfer function, but this is only possible if thermal runaway is avoided with a tight thermal tracking circuit. Otherwise, the only thing available to correct it is feedback.

Not the answer you're looking for? Browse other questions tagged amplifier analog power-amplifier or ask your own question.