In this diagram the LVDS standard is 1.2V but the overall swing is 350mV between the inputs rather than (500mV - 800mV) as shown before:

Either I am not understanding something here or one of the pictures has a mistake. What is the correct LVDS standard and what does it mean to have Vd of 350mV?

Yes, the first reference seems to be inconsistent: note they show 500-800mV difference, but the diagram immediately following still only shows 3.5mA into 100 ohms, which can only ever make 350mV.

The receiver, has a 100mV minimum input threshold range (and, as far as I know, most devices greatly outperform this limit -- some indeed being usable as cheap, high speed, general purpose comparators, if you're feeling clever); the fact that the signal is several times larger than this, is enough. Note there's also bus (multimaster, double terminated) vs. link LVDS, which halves the termination resistance, and doubles the current. Or transmitters may simply deliver double the current all the time, and that's that (in which case you'd get voltages like the first diagram).

It seems these are other standards, so if you're referring to "LVDS" as EIA-644 specifically, the other levels seem to be erroneous. (I don't have the standards to hand, mind; if others can provide better references, check them out.)

Here again there seems to be some confusion; my guess is their diagram reflects the collection of standards, not EIA-644 alone. Hence the RX/TX and two termination resistors, rather than a single direction lane.

Thanks for posting your question. The figure from the STAR-Dundee website is an old figure, which was updated in the latest revision of the SpaceWire standard. Unfortunately, our website was not updated with the new figure. Here is the latest version: 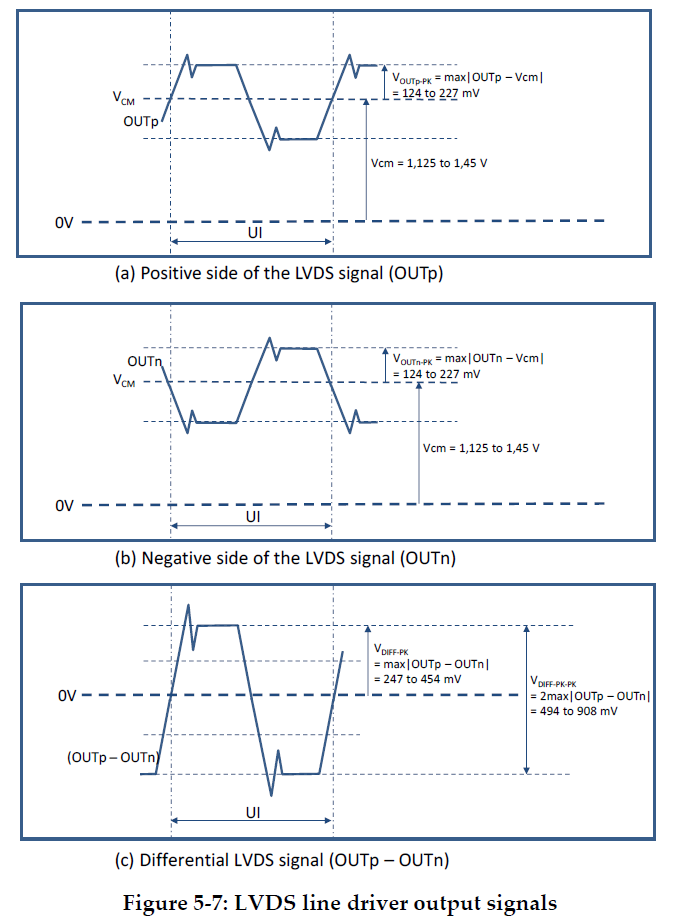 I hope this clears up any misunderstandings that the outdated figure caused. We have now updated the figure on the page you linked from our website.

6
GND plane close to LVDS differential pair?
0
iCE40 LVDS clock input
2
Effect of swapping positive and negative traces in a LVDS differential pair, for both clock lines and data lines?
1
How to send logic low to LVDS?
0
Why does LVDS (or any differential signaling for that matter) use a common mode voltage of 1.2V instead of 0V?
0
Why this LVDS transceiver doesn't specify the differential input polarity?
0
LvPECL TX and LVDS RX
2
LVDS/differential driver source impedance matching