How do I get a linear analog output from 8 bits BCD number?

I have two BCD counters I want to get an analog output from, I tried connecting them to a R-2R resistor ladder and it worked, partially, I get +~20 mV on each 1's increase, but when 10's increase I get + 120 mV which isn't linear at all.

Because for instance 30 encoded in BCD is 0011|0000 and not 00011110, I thought I should first convert the BCD integer to binary before feeding it to the ladder but I couldn't find any chip for that purpose, so I would have to implement the reverse double dabble algorithm either with a ton of supplementary components or with a microcontroller (which I don't want to use for this project).

So maybe the simplest solution is a sort of resistor ladder that can convert BCD encoded values to analog in a linear fashion but I could find any on the internet.

I'm kind of stuck right now, it's either that or the reverse double dabble but if you guys have another brilliant idea I'm all ears!

@GodJihyo I've implemented the proposed circuit and so far it gives good results like I said about ~25mv for each step which is exactly what I wanted, expect for the 14mv/-114mv step when it comes to the 8's.

To give a bit more context the DAC output will be fed to an op-amp with a thermocouple feedback, in order to drive a heating resistor so I indeed need precise values.

Here's the schematic you asked for note that I directly connected the op-amp output to the inverting terminal since I don't really need amplification, also I used 22k instead of 20k resistors because I don't have 20k resitors, the ratio is slightly changed for the 1's conversion but since it also happen with the 10's and only for the 8 integer it don't think this is the issue.

A buffer would certainly worth a try

I took the measurements before and after the op-amp, results are the same 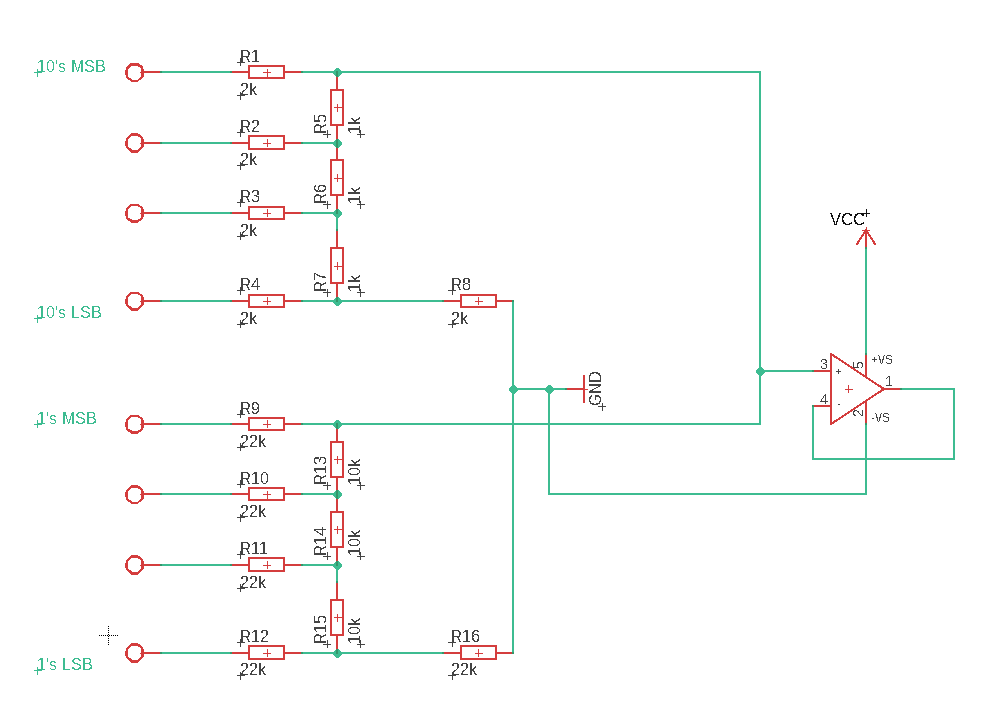 You can run each digit through a separate R-2R ladder and sum the outputs together scaling the 10s digit to give 10 times the output of the 1s digit. 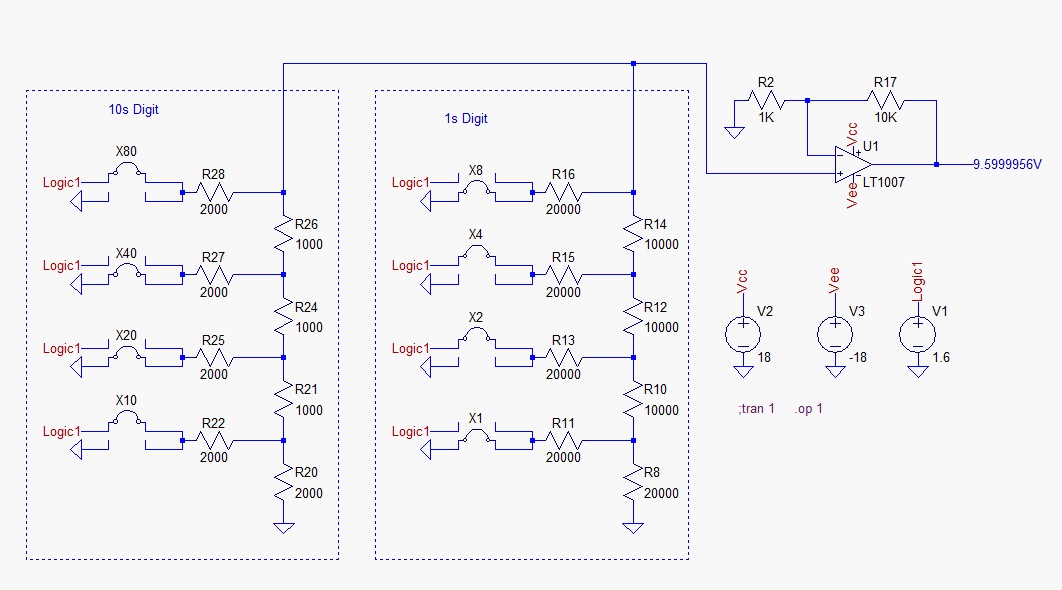 I used an LT1007 opamp in the simulation simply because it was one available by default in LTspice, it should be able to be replaced with most general purpose opamps.

The voltage for Logic1 was chosen as 1.6V so that the 16 steps each divider is capable of would give a round number, either 100 mV or 1.0 V, for each step. To scale it for other voltages you can adjust the gain of the opamp by changing the feedback ratio.
To do this use this formula to calculate the value for the resistor from the inverting input to ground which is R2 in the schematic. $$ R2 = \frac{R17}{(17.6/V_{Logic1})-1} $$ Example for Logic1 = 5 V:

Using that value for R2 should give 100 mV steps with 5 V logic inputs. Of course you would use a fixed resistor in series with a pot to adjust it exactly, 3.9K with a 100 ohm trimmer would do it.

The precision of an R-2R DAC depends on the input voltages, which are going to depend on what's driving it. The best precision would be to use relays which would have almost no voltage drop.

If you don't need precise output values and are just looking for a linear output this shouldn't matter too much, but if you want precision you need to drive it with low impedance sources.

There are at least three ways I can think of.

I'll leave it as an exercise for the reader to show that the third option, even without the virtual ground amplifier, gives a linear output, regardless of load impedance (as long as it's driven from CMOS (or other 'low output impedance in both states' technology) and into a linear load).

Not the answer you're looking for? Browse other questions tagged dac or ask your own question.

1
Need help with a R-2R DAC Circuit
4
How to deal with analog pin drivers with output switching?
1
Can't get STM32 DAC to output anything
2
analog output from pic 18f4520
0
How to handle large number of analog inputs and outputs
1
Control of large number of analog devices
0
I need diodes to build a R-2R ladder DAC from original TTL chips (not Arduino) don't I?
0
What is the relationship between the number of bits and the sample rate?