Can I run resistor at a power higher than rated if I have external cooling?

Say I have a 1 ohm 100 W resistor that can work properly in still air. I now want to run it at 150 W, but I am also using a strong fan to cool it down to its usual temperature. Is this okay?

It’s up to you to evaluate whether it’s okay. The manufacturer may not support you, since you are operating outside of the absolute maximums for the part.

If you wanted to be on solid ground, then run this resistor fed from the highest ambient temperature you expect, with the lowest allowed fan speed, through as many heat/cool cycles you expect out of your device’s lifetime, and see what happens. Nobody can answer this but an experiment in worst-case conditions.

If you need a reliable design, no. Indeed you might not even get that, as the rating depends on ambient temperature and free airflow, and if those are in limited supply, you don't get the datasheet rating -- which was calculated for, whatever, 25°C ambient in open air, perhaps in some specific orientation.

Speaking of which, pay very close attention to heatsinking requirements. Those metal-case resistors are tempting with their compact size and low cost. But notice the low maximum operating temperature (they're filled with epoxy resin after all, just like transistors are, hence the similar limits). Notice the wide mounting flange. They only work at ratings, when attached to a heatsink, with thermal grease, and a quite large one at that. You're better off buying the old fashioned ceramic kind, if you don't have the heatsink in the design already.

In general, there are two limits you need to meet:

You can control #1 by blowing air across it, or immersion in water or other coolant. If that's all that matters, then fine -- like the hair dryer example in the other answer, it's just a spool of wire, nothing magical about it, keep it cool and it'll handle almost anything.

But manufactured resistors aren't like that, they have a ceramic or epoxy body and coating around the resistive element, which absorbs some heat, and which expands as it heats up. Surface temperature isn't internal temperature. Try to put too much heat between them, and the insides might reach breakdown temperature (epoxy turns to magic smoke), or oxidize faster or melt entirely. Or the excess expansion around the element fractures the material, letting in air to speed oxidation for one, but also likely cracking the element, or allowing it to fatigue much faster due to temp cycling.

As it happens, vitreous enameled resistors can handle quite astounding temperatures, and seemingly survive -- but this is something of a special case, understand. Typical construction is nichrome wire wound on a steatite tube (a more carefully blended relative of your average stoneware ceramic), gooped up with some kind of glaze (fused glass -- based on silica and boron probably). The complete assembly is fired in the final manufacturing step: that is, raised to red heat or so (~600°C; though there are materials that melt lower than this, I don't know exactly what they use).

But understand the particulars of that situation: it's fired just once, and slowly, allowing it to cool slowly and evenly, minimizing strain.

In particular, even if you aren't heating and cooling it suddenly, the fact that the glaze goes soft, or molten entirely, is a big problem. It's providing thermal conductivity from wire to body, and wire/body to surface. You don't want it dripping away (nevermind the fire hazard on that one..), and you don't want oxygen diffusing through the molten glaze, attacking the wire. Note that nichrome is normally stable in air, even at quite high temperatures (up to 1150°C). The glaze is molten by virtue of fluxes (alkali and alkaline earth elements) in the composition. Which also flux (melt and dissolve) the otherwise robust chrome oxide layer, which normally protects nichrome wire in air. Chrome oxide isn't particularly soluble in these kinds of glasses, but it will eventually dissolve, exposing more wire; and then the wire begins to dissolve, resistance increases, hot spots form, and eventually it burns out completely.

Typical failure mode, from excessive power applied suddenly, is the wire and glaze heat up and expand away from the core / each other; the glaze shatters, and eventually sloughs off, the wires loosen, and you get an exposed toaster element -- which might not sound too bad, but flecks of glaze will still stick to the wire, and eventually corrode through. Plus, the wires loosen and may short together or spark. And then there's no insulation to stray nearby wires. And it's more vulnerable to the environment, e.g. salt spray will eat up the wire quickly after something like that.

And remember, that's if your connections can even stay put, which is itself a tough sell. Ordinary PVC insulated wire will burn away from a resistor cooking so hot -- so hot that soldered connections are impossible (we're talking a resistor body WELL above the melting point of solder, maybe even of pure lead!), bolting or crimping is required. There are materials to handle this, but they are specialty: not something you're going to spring for when you're trying to cheap out on resistors already. (Examples include nickel-plated copper with PTFE or mineral (braided fiberglass) insulation.)

So, in short: no. If it matters: definitely no. If it doesn't matter: maybe, but expect it to fail eventually.

And even then, that's for the most robust type of ceramic wirewound resistor. Metal-case and other plastic-packaged types simply fall apart at high temperature. Metal/oxide film types aren't going to survive any fracture of the substrate. Metal and carbon film types burn up (oxidize) rather quickly once the core is exposed and glowing. (You can indeed take, say, a 1/4W carbon film resistor and burn the hell out of it: the enamel (epoxy paint) burns off quickly, exposing the metal-studded ceramic core with the resistive track deposited upon it. Which glows red hot for a few seconds, before burning up and finally going open circuit -- an impressive sight.)

A typical example of such an "overpowered" resistor is the mobile immersion water heater. If you take it out of the water, it will burn.

Another more sophisticated example is the travel hair dryer where two devices - resistor (heater) and motor (fan) serve each other. 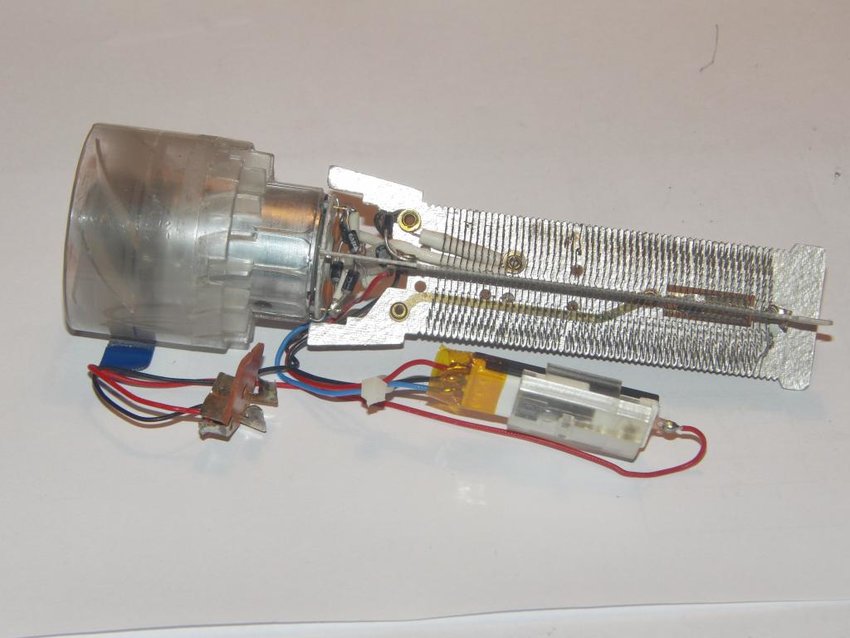 The resistor decreases (limits) the current through the motor and the motor cools the resistor. We can even see a kind of positive feedback in the operation of this system (see my RG question).

In both examples, the heat is utilized.

Not the answer you're looking for? Browse other questions tagged power current resistors safety heat or ask your own question.

11
If supply amperage is higher than max. amperage, do I need a resistor?
0
LED lights behave strangely, why?
0
Miniature heater with more-or-less constant temperature. Need tip on element
1
How to determine watts and ohms for circuit board resistors?
1
Creating small heater
5
Better approach for maximizing Cooling Fan Life Expectancy
3
How to choose a properly rated power resistor for pulsed current?
1
Reduce the heat output of a MOSFET (buck LM5085)