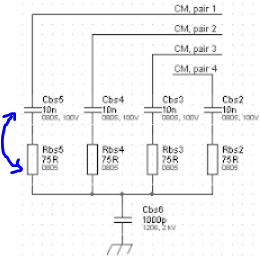 Depends on how high the capacitance is. For linear regulators higher capacitance is not always good as it may cause instability (e.g. putting 47u as opposed to the manufacturer recommendation of 1u). In your case, placing 1.01u instead of 1.0047u will not create an instability, of course. But I just wanted to point this out. Anyway, using 1n instead of 0n47 might be better for HF noise filtering. But it's always a good practice to follow the manufacturer's recommendation(s).

By the way... I don't know if this is stated anywhere in the community before but I'd like to say that the values given in Bob Smith's termination network are actually problematic because they don't bring a CM impedance matching for neither of CAT5, CAT5e and CAT6.

For resistance, some researches and works show that the proper termination should be around 50 Ohms for CAT5 and CAT5e, and around 65 Ohms for CAT6 (can't remember the exact numbers).

Not the answer you're looking for? Browse other questions tagged voltage capacitor resistors ethernet phy or ask your own question.