What type of op-amp configuration is this from a PLL circuit?

Can someone help me to understand this attached op-amp model? We are using it in an HMC3716 PLL circuit. We don't know how it works, exactly.

Is it an integrator or a differentiator? 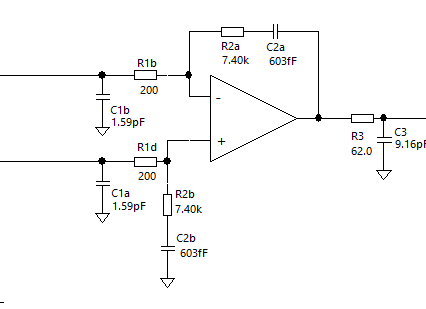 It's a differential input 'broken' integrator, followed by a lowpass filter.

If the feedback impedances had been pure capacitors, then this would have been a differential integrator. The addition of R2x makes this a 'broken' integrator, giving it a finite constant gain and assymptotically zero phase shift above the R2C2 break frequency. Without the resistors, the phase shift would have stayed at 90 degrees at all frequencies, rendering the PLL unstable at any loop bandwidth.

The picture in the question is of the loop filter. It is a low pass filter, also known as an integrator.

The HMC3761 datasheet shows an example: 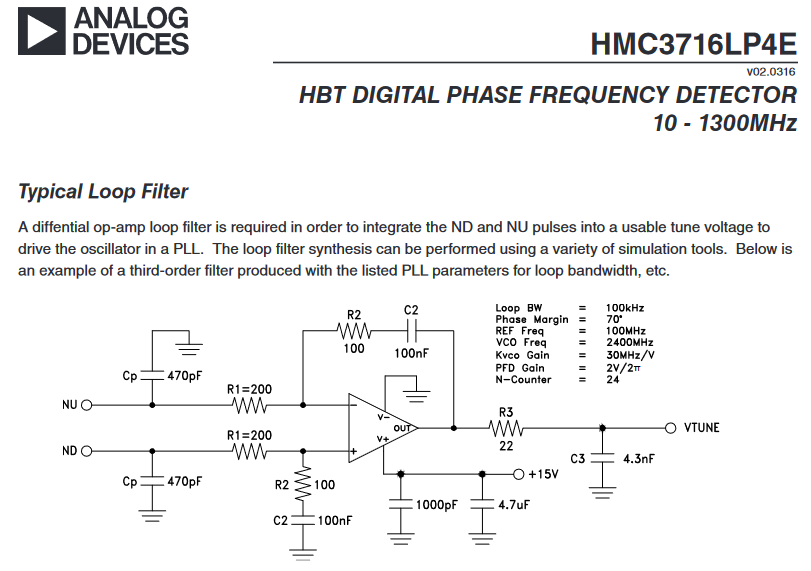 The values are different, but the structure is the same.

The loop filter smooths the tuning voltage that goes to the VCO.

A lower cutoff frequency makes the synthesized frequency cleaner, but it also makes it take longer for the PLL to reach lock.

A higher cutoff frequency reaches lock faster, but has a noisier output from the VCO.

The presence of C1b and C1d suggests that whatever is feeding it is not of zero impedance, so I can't tell you exactly what the gain is. But the feedback network (R2a and C2a) indicate that it's an integrator with a zero at \$\omega = \frac{1}{R_{2a} C_{2a}}\$.

So -- it's got some low-pass to it, with C1 working against the impedance of the preceding stage, then it's a proportional-integral filter. That's pretty much a classic loop filter for a PLL.

Not the answer you're looking for? Browse other questions tagged operational-amplifier amplifier inverting-amplifier differential-amplifier or ask your own question.

4
Calculating resistor and capacitor values for an op amp differentiator circuit design
2
Op-amp differentiator and integrator circuit: resistor and capacitor values
14
What does this op-amp circuit do? (part of an ECG)
1
What is the purpose of these elements in this circuit?
2
Op amp circuit with two capacitors
3
What type of amplifier is this?
1
Dithering Circuit using an Op-amp
0
Diff amp ac equivalent circuit confusion