I need to analyze a schematic and I am having trouble with this part: 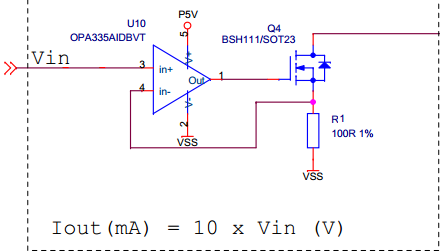 The thing is I don't get at all the utility of the N-channel MOSFET at the output of the op-amp. Could anyone explain the purpose of this component?

Because I think, the conversion would be done even without this transistor.

This circuit converts a voltage in a current, as you can see in the transfer function.

The transistor isn't relevant in calculating the output current, which is only dependent on the input voltage and R1.

From the circuit you can find that:

But if the Opamp is in the high-gain region, you'll also have that (ideally):

Therefore you can compare the right term of both equations and obtain:

The transistor is meant to drive the output current depending on the gate voltage. Think about it this way: the Opamp will do what's needed to make its input equals, and this willimply supplying a voltage so that R1*Iout is equal Vin. The relation between Iout and Vo(opamp) will be set by the transistor.

So the transistor will perform the real V-I conversion, creating a feedback loop with the op-amp.

The transistor is the heart of the circuit, it is fundamentally a voltage-controlled current sink. Unfortunately, it's a nonlinear device (the voltage to current characteristic is not a straight line), so the opamp and the resistor are there to linearize the function of the circuit overall.

Because I think, the conversion would be done even without this transistor.

Also, the amount of current an opamp can sink or source is generally very small, so even an OTA without an external 'buffer' like the MOSFET circuit would have extremely limited V-to-I range.

If this still doesn't make sense to you, please explain why you think the conversion would be done without a transistor.

Assume that the Vin signal goes to 1V. There's now a difference of 1V between the op-amp inputs. The opamp output will start slewing towards the positive rail, since the non-inverting input is higher than the inverting input, and since the MOSFET is off, the opamp is open-loop with extremely high gain. Eventually, the opamp output voltage will reach the gate-to-source threshold of the MOSFET, and it will start conducting.

One of a few things could happen now.

If the off-page connection to the drain of the MOSFET goes to a voltage source, the MOSFET will start controlling the current that flows through it as a function of the gate voltage. The current through the MOSFET creates a voltage drop across R1. The voltage across R1 is the feedback - we're no longer open-loop - since the R1 voltage gets fed back to the non-inverting input. The system will reach equilibrium when enough opamp output voltage is generated to control the MOSFET to allow exactly enough current to flow through R1 to create an identical voltage drop to Vin, and will maintain equilibrium by adjusting the opamp output as Vin (or the MOSFET dynamic resistance) changes.

If the off-page connection isn't connected to a voltage source, no current will flow through R1, the opamp will remain open-loop and the opamp output voltage will rail to its maximum possible positive output. The MOSFET will be on, but not doing anything.

The advantage of this approach is that a small, relatively 'weak' opamp (in terms of drive capability) can be used to control tens, hundreds, even thousands of amperes - it's just a matter of the size of the MOSFET and the power handling capability of the sense resistor.

It's (as the caption explains) a voltage-to-current converter. The voltage at the top of R1 is equal to (source-drain current through Q4)/100. The opamp will operate in "voltage follower" mode, increasing its output until it reaches an equilibrium with its two input terminals equal.

So the effect is a variable current sink. This is independant of the voltage at which that current is flowing (from something off to the right of this diagram). Given that opamps are voltage based devices, it's quite hard to get the same effect just with a resistor network on the output.

This arrangement also allows for a larger MOSFET and a weaker amplifier than trying to do it all-in-one.

The analysis of this topology including stability concerns are very well adressed in this paper by TI. Operational Amplifier Stability Part 5 of 15

It might be useful to read the previous parts to fully understand. But they are available on the web also.

EDIT: sorry it's a BJT in my document. But anyway, it's a good document...

Not the answer you're looking for? Browse other questions tagged operational-amplifier mosfet or ask your own question.

2
Saturating a N-Channel MOSFET
0
MOSFET N channel power switch: high side doesn't work and low side would need multiple MOSFETs
0
Oops! N-channel Mosfet on sinking output
1
What can I replace a BSS138 N-Channel MOSFET with?
0
Power N-Channel Mosfet as a Switch
1
What is a VN01A Transistor?
2
Mosfet channel length modulation