Can I use multiple BJT transistors in parallel if a single one can't carry enough current?

The maximum current my transistors are designed for is 1.5 A (from collector to emitter).

I am looking to use a Raspberry Pi GPIO pin to switch a white LED strip on/off, by placing a transistor in the place of the ground wire of the LED strip.

The LED strip has a maximum current of 2.4 A. Can I use two transistors in parallel to supply the required current?

Below I've attached a rough schematic of what I mean, here I've coloured the wires going into the transistors' collectors as green and emitters as orange to distinguish between the two.

Secondly, is this safe? 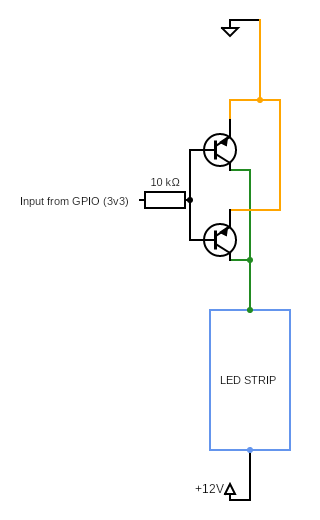 Your schematic is hard to follow, normally it is top down and left to right. Your + should be on the top and your ground at the bottom. Yes you can parallel transistors but you need to add low ohm emitter resistors so they balance. You will lose between 0.7V to 1.4V depending on the transistor. Consider using a logic level N-Channel MOSFET, you will only need one and it will be much cooler. When you pick the MOSFET try to find something with a Vgs at least 2.5V or lower. With that I would put a 10K resistor from the GPIO pin to ground and something around 50 Ohm between the gate and GPIO pin. Be sure all grounds are connected. Source would be ground, Drain would be the output and the Gate is the input.

Yes it can be made safe but you need to separate base resistors that will supply a total of 5% of the LEDs for a current ratio of 20 or less.

Because the current gain of the transistors reduces down to 20 or 10% of the maximum and also because the maximum current rating also implies the maximum temperature rise of 100° so consider using three of those cheap transistors in parallel with three resistors that adds up to 15 or 20% of the LED current.

The reason you cannot share the base resistor is because of the negative temperature coefficient of the base emitter and this results in current hogging when it gets hot and thermal runaway.

If it were an emitter followers then you would have a very low resistance on each emitter, but these are common emitters so the bases are isolated by Rb’s.

2
Transistor question and is my circuit safe for Raspberry-Pi?
12
Using a microcontroller to turn on LED strip
0
Use one or two transistors to switch an LED from PIC
0
Senseo & Raspberry PI soldering circuit board
0
Connecting KY-009 to GPIO of Raspberry Pi
0
Raspberry Pi driving a LED through a MOSFET
2
NPN Transistors Not Working When Emitter Is Grounded