What is the purpose of putting resistors in series with current-feedback opamp supply pins?

Opamps U1/2/3 are current-feedback opamps used in a RF signal conditioning circuit. U1/2 control the gain through R8 and S1. U3 along with U7 allow for polarity toggling. What I don't understand is the 4.7 ohm resistors in series with U1/2/3 supply pins. I suspect the current-feedback topology of the opamps has something to do with it? Is current sourced from these resistors in some way? What would removing these resistors do to the opamp performance (generally)?

PSRR Power Supply Rejection Ratio is 65 dB min and unity gain BW is 300 MHz means the PSRR drops to zero near the GBW so PS filtering is essential to avoid degrading the SNR of the output signal.

You may need to define your PS ripple spectrum but the harmonics are attenuated by this filter.

It is always advisable to include RC filters for all UHF IC's to decouple noise from the DC power source. (if you care about high SNR and avoiding positive feedback between sources and inputs that lead to spurious oscillations)

TY @JohnDoty yes adding the RC LPF not only reduces dV/dt but also dI/dt in the external power loop traces that may have stray H fields or conduct ground shift noise from load steps.

In other words, it improves both ingress & egress spectral attenuation both conducted and radiated with a damped cap across IC.

What I don't understand is the 4.7 ohm resistors in series with U1/2/3 supply pins.

You get an improvement in PSRR (power supply rejection ratio) when your potentially noisy supply lines are locally noise decoupled to each op-amp using an RC filter. This comes at the expense of slightly lower full-scale output voltages. Net PSRR improvement in blue: - 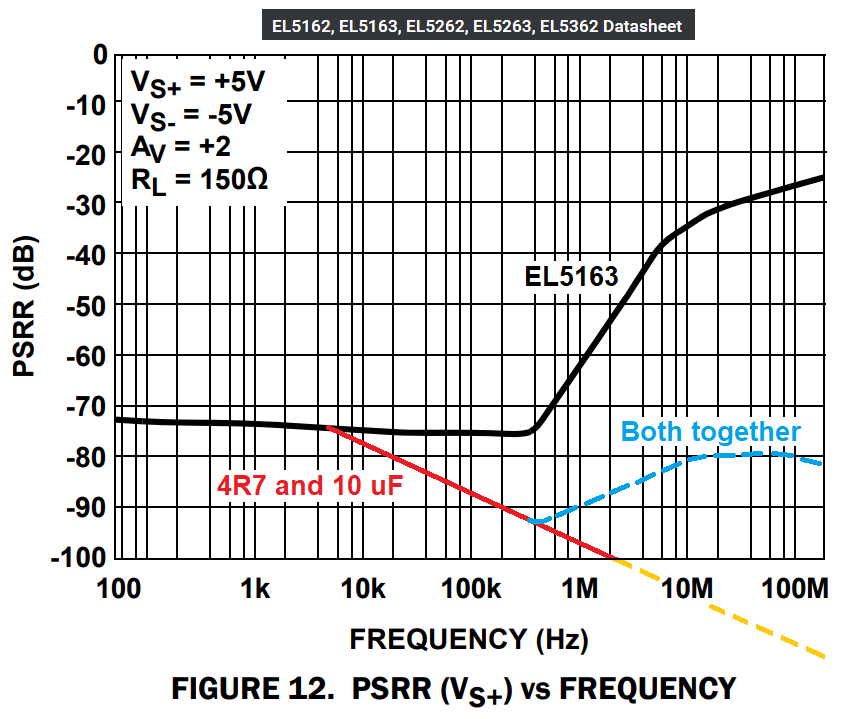 I suspect the current-feedback topology of the opamps has something to do with it?

Is current sourced from these resistors in some way?

Current flows through resistors and, unless you are talking about thermal noise emissions of resistors (that are very tiny for 4.7 Ω) current is not sourced from a resistor.

" Is current sourced from these resistors in some way?"

Yes, it is. But just having a resistor is not the whole story. Equally important is the capacitor attached to it. The two combine to (somewhat) isolate the other op amps from power supply variations caused by the varying current drains as each op amp varies its output voltage.

" What would removing these resistors do to the opamp performance (generally)?"

Generally speaking, removing the resistors will increase the likelihood that the op amps will interact with each other, usually in such a way as to produce high-frequency oscillation.

This can be a problem even for audio-range op amps, particularly in the old days when multilayer pc boards were not widely used, and ground and power distribution could be less than optimal. Going to ground planes and voltage planes generally avoids the issue. Except, of course, for high-frequency op amps like the EL5163. Those puppies work out to 500 MHz, and it's easy for parasitics to cause unwanted coupling between op amps.

3
How does this single supply opamp circuit work, and what does the output look like?
2
Working with current feedback opamps [CFA]
1
What determines absolute value of resistors used in opamp circuits?
6
Purpose of capacitors and extra resistors in the feedback of the inverting op amp?
0
How can I establish "frontiers" in the feedback resistor of an inverting opamp config, if I'm varying it with a pot?
1
gain of opamp circuit with current output
1
Inverting OpAmp with voltage divider in feedback loop
1
What is the purpose of the op-amp feedback circuit?
4
Biasing a DIY current feedback opamp