My question is very direct. I understand the definitions and formulas involved in the association of resistors in both series and parallel, but when solving the circuit below, I don't quite understand whether or not to consider resistors R5 and R6, and how to do it, when trying to find the equivalent resistance between terminals A and B. 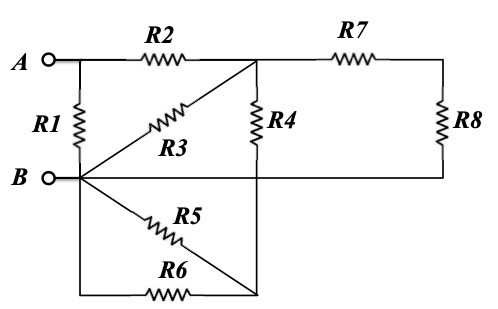 Re-arrange the circuit and it'll be easier to solve: 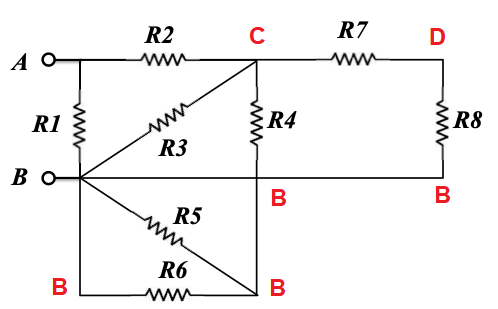 The idea is simple:

1. Node name doesn't change along a wire. Node B is a good example:

2. When you see a resistor along a wire then change the node name.

3. If a resistor has the same node names at its both ends then simply delete that resistor and replace it with wire with the respective node name. Because it's shorted. R5 and R6 is a good example since they both have B on their both ends.

It's way much easier to read, innit?

I'm leaving finding the equivalent resistance between A and B to someone else (ideally, you).

Don't be confused or mislead by the diagonal "wires". Resistors R5 and R6 are tied together at each end, so they are parallel by definition. In my experience it is almost always easier to do pairwise simplifications first, and then reduce more when it is 100% clear.

So you can forget R5 and R6 because they are parallel to a short. Also: R3 and R4 are parallel.

This leads to the following schematic

Don't look at the values, they are just the default values in the schematic editor.

We can now continue to simplify. R7 and R8 are in Series so can just be added together. R3 and R4 are parallel, so we also combine them...

Now we see that R3|R4 and R7+R8 are parallel, so let's simplify again.

Not the answer you're looking for? Browse other questions tagged circuit-analysis resistors parallel series analysis or ask your own question.

2
How to calculate a simple mixed parallel/series resistor circuit
0
Series - Parallel Resistor Calculations
2
How does wiring resistors in series and parallel affect their errors?
2
Voltage Output of a Current Source in Parallel and in Series with a resistor
0
How to find the equivalent resistance of this circuit?
1
Resistors in series and parallel conundrum
2
A large resistor in series (parallel) with a small resistor has the resistance of the larger (smaller) one, roughly?
6
Simple question about the difference between Thevenin resistance and non-Thevenin resistance
1
Resistors both in series and in parallel?