Why did my LED drivers blow up?

I recently designed my first PCB, which houses LED driver circuitry for some custom lighting. I fastidiously followed the driver's datasheet (Diodes Inc AL8862QSP-13) in designing the circuit: making sure the inductor, capacitor, current sense resistor, and freewheel diode were suitable, and particularly ensuring input and output voltages (48v and 18-25v, respectively) were within spec.

I plugged it in and the LEDs lit briefly before tripping the power supply's overcurrent protection. I should have stopped here to think, but I instead connected it to a larger power supply (same voltage). Pop! All three drivers went up in smoke.

I've carefully reread the driver datasheet and scrutinized my design, and I am completely at a loss what might be wrong. My circuit is laid out exactly like the typical circuit in the datasheet.

The drivers are supposed to have overcurrent protection, so I'm not sure how they would have immediately blown up like that. This is only my second time doing SMD soldering (and I did it in a toaster oven), so that's a possible failure point, but the fact that 3 out of 3 drivers failed makes me think it's something other than that. Unless I possibly overheated the ICs in the toaster oven? I've also realized the exposed pad (EP) should be connected to ground, whereas I had it floating, but I don't think that's a major problem.

Can anyone provide suggestions? I've included a screenshot showing the schematic, pictures of the final product, and the KiCad PCB design (note that copper pours are not shown to make it easier to see the tracks). Inductor is 330uH (Bourns PM5022-331M-RC); capacitor is 10uF (Samsung CL31B106KBHNNNE); resistor is 100mOhm (Stackpole CSRN2512FTR100); freewheel diode is SMC DSS15U.

I have verified that the wire connections from J1 to the LEDs are in the correct order.

Track width was based on IPC-2152, which indicates that TINY (0.06mm) traces are sufficient for 40C rise with copper pour and 1oz copper. For safety, I increased this to 0.5mm. This board is also actively cooled with a fan. I've checked and double-checked to ensure the components are oriented properly. 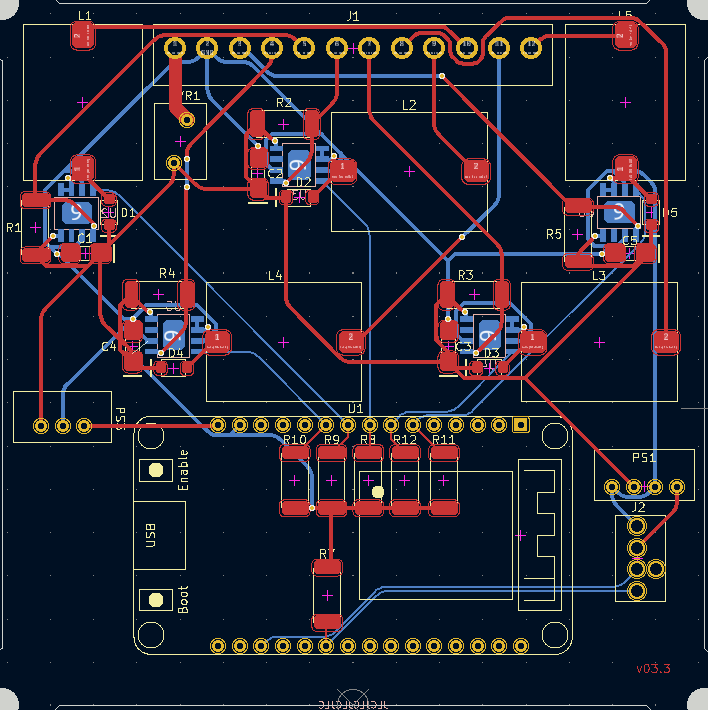 Now the device says it will work from 5 V upwards. In addition to all of the comments, to troubleshoot this particular incarnation of the board, I would do this:

This particular datasheet is not the most user-friendly. It shows pin names and functions, but barely a real circuit, let alone no PCB layout recommendation or guidelines. An expert could use this well enough, but only because they've already blown up enough boards to know all of these gotchas.

In addition to the answer from @rdtsc, your trace leads are far too narrow, and that, in turn, leads me to suspect your PCB layout.

You don't say what current you're running. You should analyze the circuit and figure out the RMS* current in each trace. Then you should find a trace width calculator and make the traces that long. Then you should look at the schematic, and identify each loop in the circuit where there's lots of switching current, and you should make those loops small, both to reduce stray inductance and to reduce emissions.

While you're at it, check the current through D3 -- if L3 is sized correctly, then D3 is probably too wimpy. If D3 isn't too wimpy, then L3 is probably bigger than you need.

You may want to dig through the Diodes, Inc website to see if they have an app note on this chip -- typically manufacturers make sure that there's a recommended layout available.

If there isn't such documentation, and if it makes sense within your project, I'd even go as far as to suggest that you choose a different chip that includes a recommended layout and parts list, and just copy that.

* If you've only been working on radio or AC power, or even if your engineering culture is slightly different than mine, our definitions of "RMS current" may be different. Note that when I say "RMS current" here I mean you should find the mean of the square of all of the current, both DC and AC components -- some people may call it the "DC + RMS" current.

To add to @Reid's and @rdtsc's observations, I noticed that the data sheet for the AL8862Q indicated that the FAULT pin ought to be connected to VIN via a pull-up resistor. I'm not familiar with this chip, but I wonder if the lack of the resistor might have an unpleasant side effect like oscillation that cascades into the failure mode you encountered.