I'm a total beginner, trying to find my way through basic electronics... I went over some written material and YouTube courses, but there is something I don't think I get right.

Consider my case - I have a microcontroller that can be sent to sleep mode and wake up externally by pulling a specific GPIO pin to GND. So far so good.

I want the device to sleep until it's moved (physically) by the user, and for that I have a cheap vibration switch (see this link). This switch is normally closed and a tiny spring inside opens the switch when it's being moved.

I basically want to create a circuit that will be normally pulled high, and when the device moves, the switch opens and it pulls it to GND.

I created this sketch, which I believe does what I want: 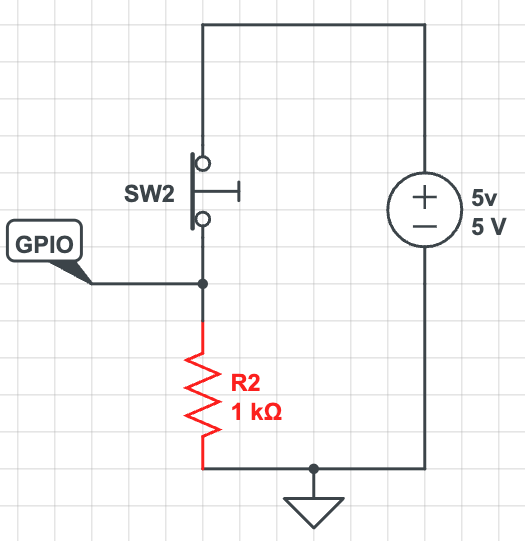 But IIUC, this also means that there is a constant current of 5mA in my case through the battery. I understand that I can play with the resistor value to lower this current, but what I can't figure out is why not using a 1000Mohm resistor or something like that (1Mohm resistors seem pretty cheap) to make the current completely negligible? I can only assume that at some level of resistance, it will basically be like cutting the wire, and in that case I understand why voltage won't drop to GND, but I seem to have some point if "irregularity" in the middle.. If it works with 1Kohm, why not 10K, anda then 100K, 1M and 10M? What causes it to stop working? Can I calculate this "max" value?

Another thing that bothers me - Do I need another resistor in the upper side of the circuit? What happens if I just connect 5V directly to a GPIO pin? Is there any current flowing?

One way to calculate it is to look at the maximum GPIO voltage that is not guaranteed to be interpreted as "low", and subtract some noise margin (say 500mV). Then use the maximum GPIO leakage specification (being careful, in both cases, to check that the limits apply over the temperature range) and calculate the maximum resistor value.

The maximum leakage is 1.0uA.

So a resistor of 500k\$\Omega\$ maximum would be acceptable from a leakage point of view. Some kind of RC filter would be a good idea at those levels. A 100nF capacitor has an impedance of about 26k\$\Omega\$ at 60Hz so even a small capacitor would help.

In practice, to avoid noise pickup and other potential issues, unless power saving is an overriding consideration, it's usually better to keep the value under 100k\$\Omega\$, and more like 5k~50k\$\Omega\$. Internal pullup/pulldowns are typically in the 50k\$\Omega\$ range, which is toward the higher end of what is good from a noise pov.

To help with ESD (and in case the GPIO somehow gets switched to a low output, some series resistance on the input is not bad idea, however that means that your reistor has to be lower in value. Something like this: 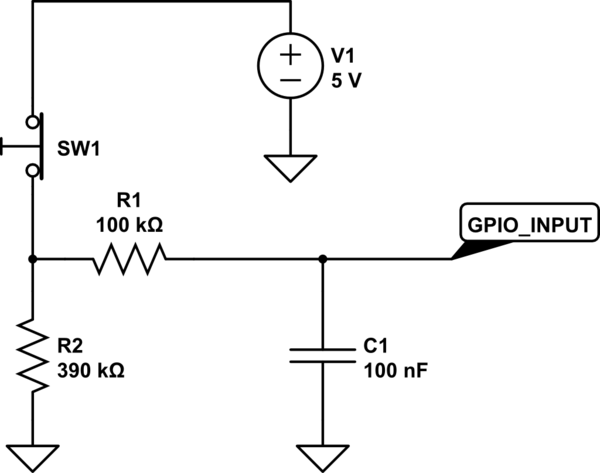 It takes some milliseconds to tens of ms to respond with this circuit, and much faster response to the switch conducting (released) than not conducting (pressed).

The really careful/paranoid designer would add another resistor after the 100nF capacitor of perhaps 510 ohms to limit the transient input current to less than 10mA in case the power supply is shorted.

Another technique if you don't need fast response would be to use the above circuit but replace V1 with another GPIO set to output and initially set low (zero current draw). You could then reduce the resistors R2 to (say) 4.7K, and R1 to 4.7K. You can reduce the capacitor to (say) 1nF. Then the time constant is ~10usec. Then you could periodically (say ten times a second) pulse the GPIO output high for (say) 50usec and read the input at the end of the 50us period, then return the output to the low state.

Note: The current through the switch is less than 13uA with the above schematic. While that's nice from a power saving pov (and simple), many switches require a much higher current to operate reliably. For example, this decent quality NKK switch requires 100uA (Au contacts) or an unspecified (much higher) current (Ag contacts):

If the minimum current is not specified you should not assume it's less than the mA range. And obviously once the Au contacts have been used for switching a power load they no longer likely will be reliable switching microamperes since the thin gold plating will be gone.

For a PIC16F1825, with which I am familiar, the stated typical leakage current of a GPIO input pin is 5 nA and maximum of 125 nA. This device also has an internal weak pull-up that draws a maximum of 200 uA. So you could just use that if the current is acceptable. But it looks like you could use an external pull-up resistor that draws 1 uA to pull the GPIO input up to a reliable logic high level, so 5 megohms should work for a 5V device. For various reasons discussed in another similar Q&A, it is usually better to use a pull-up and a switch to GND. You will need to consult the datasheet for your device to determine what will work best.

this also means that there is a constant current of 5mA in my case through the battery.

What causes it to stop working? Can I calculate this "max" value?

With large enough resistance, leakage (GPIO itself, breadboard/PCB, atmosphere, case, etc) and stray charges (e.g. from environmental disturbances) can accumulate on the GPIO when the button isn't pressed. Additionally, there's a parasitic capacitance, and excessively large resistors lead to slow discharging of the capacitor when the button is released.

I don't do super-power-constrained applications, and my goto is 4.7k or 10k unless I have high ris

Do I need another resistor in the upper side of the circuit? What happens if I just connect 5V directly to a GPIO pin? Is there any current flowing?

You don't need a resistor. If the device is powered by 5 V, then no continuous current will flow when you apply 5 V (or 0 V) to the GPIO pin. A brief burst of a small amount of current will be used to charge/discharge parasitic capacitances. Note the restriction on voltage - if you apply 5 V to a 3.3V capable GPIO, you can damage the GPIO and/or have an unexpected current flow.

You could add a another resistor to create a voltage divider: 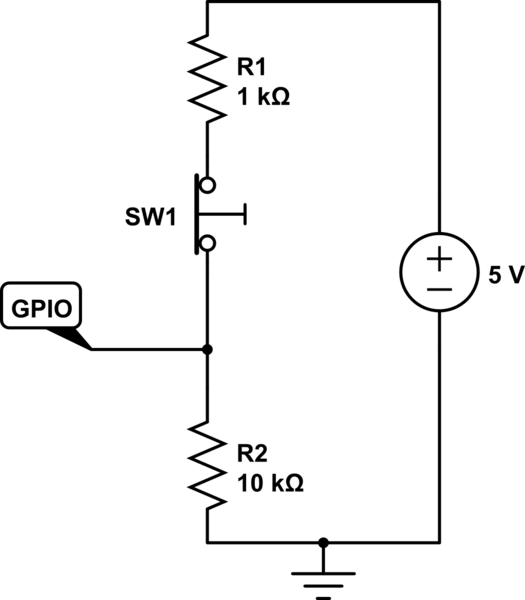 Here I've added a 10k between the IO pin and ground, which means when the switch is closed (normal operation) the IO pin will "see" the result of

Which is about 4.5 volts, which should be just fine for a logic true. When the switch is opened, the IO pin will be pulled instead to ground by the 10k.

When the switch is closed as usual, 11k of resistance will result in about 455 µA of current flowing, which is fairly low.

If you are designing a device that's meant to last for years with a battery, that amount of current may be unacceptable. In that case, you can try increasing both resistor values to achieve an even lower current. If you think of the GPIO pin of your microcontroller as being the gate of a transistor (which it basically is), then you need some current to flow in order to charge or discharge that gate and be discerned as a signal instead of noise.

Another, more complicated option is to replace R2 with another GPIO pin that's configured for output and set low. That gives you the option to, in firmware, change the function of that pin between acting as ground connection and being "disconnected" (high impedance).

Not the answer you're looking for? Browse other questions tagged microcontroller resistors pullup or ask your own question.

31
Smart ways to detect a button (less power consuming)
0
Which one is better to use for micro controller input mode? Pull-up or pull-down?