What's the use of the 100 kΩ resistors in this schematic? 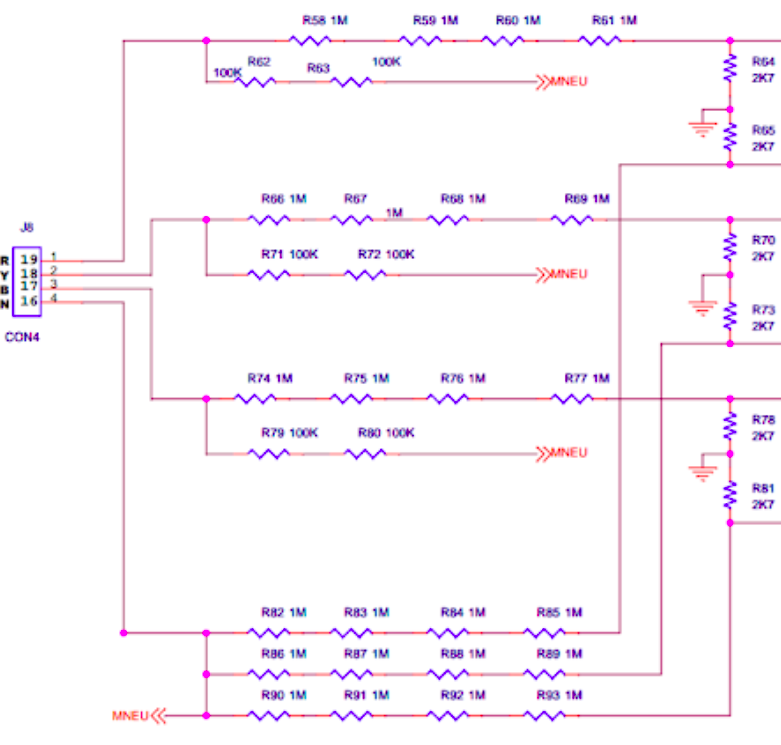 I can't understand the usage of 100 kΩ resistors. The possible explanation I could think of:

Can anyone explain the issues that might arise if the 100 kΩ resistors were removed?

It's often a bit of speculation as to what a designer had in mind, especially not knowing the measuring instrument or its purpose. Anyway, it appears that a differential measurement is used here, phase to neutral voltage. It seems that these resistors would be useful in detecting a loss of phase, as well as allowing operation in a single phase situation, by pulling the open phase to the neutral voltage.

I can't understand the usage of 100K resistors.

Thought: These 100k resistors are used for creating a virtual "neutral" of the three phases.
You can then measure the "displacement" voltage of the Neutral wire.
Depending on what you want to measure, one can have the answer at the three differential outputs. But some "modified" (as stated before) wiring should be used. 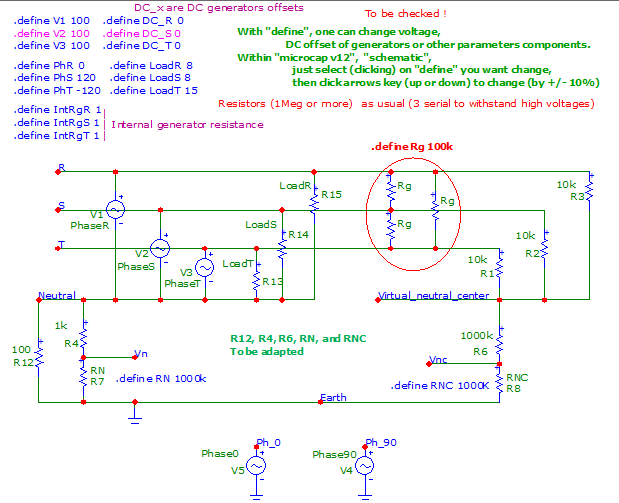 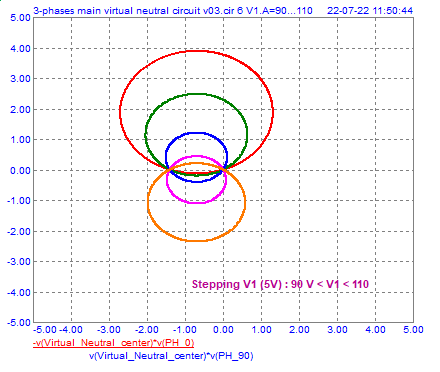 If somebody wants to enjoy this ... Run Transient Analysis.
Made with microcap v12.

The 100k's will add a very slight load to all phases.

If one of the phases were broken, it will then read significantly lower than the others*.

*Note it probably won't read exactly zero, due to AC coupling between conductors. Such would require a substantial load.

How do you choose [these] resistor's value?

So if each resistor is 1/4W (0.25W) and two are in series, the power dissipated by one is 0.144W. This is on-par with resistor wattage rating convention; that is, they should be rated at twice the dissipated power. Otherwise they get too hot and will fail, especially in hot environments or with inadequate air cooling.

So these values were likely chosen as a series of compromises:

Assuming that schematic is for a measuring instrument, they're probably there to rapidly bleed off any voltage when J8 is disconnected, to prevent a technician from getting zapped if they disconnect then touch the conductors in J8.

"MNEU" = Mean Neutral voltage could have been an indication of load imbalance from load regulation error without current sensing but then they shorted it to NEU. so they are redundant resistors. Perhaps it helps on an open phase condition. But I would reckon the stray impedance of an open phase fault would be much lower reactance than 2x 100k , so it won't be 0 V.

As always, it's hard to guess the assumptions without specs.

Not the answer you're looking for? Browse other questions tagged resistors ac voltage-divider three-phase voltage-measurement or ask your own question.

1
Obtaining 240V from 480V 3-phase
7
Why does a UPS need an isolation transformer?
1
How does three phase add up?
0
How are the individual homes connected in a 3 phase power distribution system (power grid) so that they have correct voltage?
1
Help understand 3-phase generator load in amps in a mixed single and 3-phase grid
0
Checking Phase sequence in a 3Ph. supply with uC
0
3-phase Voltage Measurement
0
Is the current on a 3-phase AC motor (mostly) identical across all phases?
0
Why can't the circuit breaker interrupt this circuit?