Here is a question for those who understand unusual, non-conventional op-amp configurations.

Is there any reason an op-amp can't be configured with an input going to the inverting input, and the feedback connected to the non-inverting input through a second inverting op-amp set up with a voltage divider to reduce gain to below 1, causing gain in the main op-amp?

I know that the issue of compensation for the additional op-amp's phase shift is not to be ignored and would need to be dealt with using additional compensation, but that aside, isn't that essentially the same as the standard non-inverting configuration?

I.e., the input stage is a differential pair, and the feedback goes to the opposite input of the differential stage, with its phase reversed to make it negative feedback. Should work, albeit quite non-conventional. No?

The power of thinking

Your question looks like a "circuit puzzle" whose purpose is to make us think (a rare activity in this consumer age:) If you will allow me, I would use it in classes with my students to make them rack their brains. Okay, let's try to answer this challenge (I will use resources from my Circuit idea wikibook).

The philosophy of negative feedback circuits

We can figuratively name this idea "active copying" because we make an (output) quantity Y equal to another (input) quantity X by subtracting them and adjusting Y so that to zero the difference (X - Y = 0). As a result, Y = X.

So, to implement this idea, we need a subtractor. We can make it by inverting one of the input quantities of a summer; thus we obtain a summer acting as a subtractor. But how do we sum voltages?

Kirchhoff's two laws give us an idea how to make two types of summers, respectively two types of negative feedback circuits - serial and parallel.

Series non-inverting amplifier (KVL). To make a series subtractor, we connect the two voltages (input and output) in series with grounded middle point. Note that they are connected in opposite direction when travelling the loop but in the same direction (polarity) regarding the ground. The result of subtraction is a floating voltage that needs a differential input. To ensure stability (negative feedback), we connect the output voltage to the inverting input and the input voltage to the non-inverting input. As a result, the circuit acts as a non-inverting amplifier with well-known properties - high input resistance, common-mode signal, differential input, gain 1 + R2/R1.

Parallel inverting amplifier (KCL). To make a parallel subtractor, we connect the two voltages (input and output) in "parallel" through resistors. Now they are connected in the same direction when travelling the loop but in the opposite direction (polarity) regarding the ground. In this case, the result of subtraction is the voltage of the middle point between the resistors (referenced to ground) that needs a humble single-ended input (the unused op-amp input is grounded). To ensure stability (negative feedback), this voltage should be connected to the inverting input. The input voltage changes this voltage in the same durection; so the circuit acts as an inverting amplifier with well-known properties - relatively low input resistance, single-ended input, gain -R2/R1.

The classic op-amp circuits above were implemented by passive resistive feedback networks that are noninverting. If we replace them by inverting active networks, we must swap the op-amp inputs to keep the feedback negative. Thus we will obtain two more "unconventional" configurations with "odd" properties:

See also my Wikibooks story about the related lab with my students in 2008.

isn't that essentially the same as the standard non-inverting configuration?

Using the non-inverting input of an opamp to achieve negative feedback is quite common if the "inversion" is performed by an external component (sensor, actuator, driver etc). As you mentioned, if this inversion also has gain, this should be considered for stability.

Should work, albeit quite non-conventional.

Without knowing more about the signal and output requirements, yes. Simulating with almost ideal opamps with 10 MHz GBW: 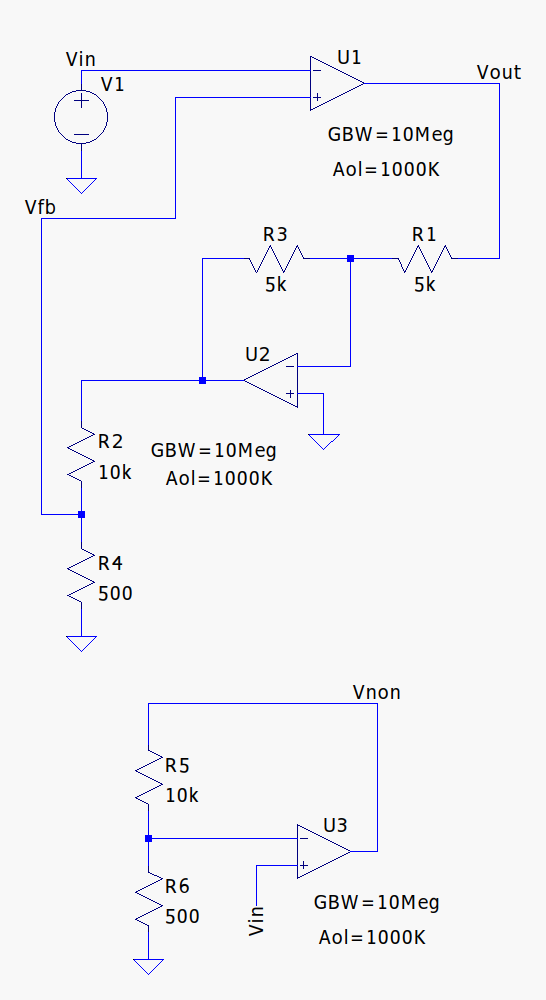 The DC gain (given by the the \$10 k\Omega\$ and \$500 \Omega\$ resistors) is the expected one and there is practically no difference in frequency response when compared to the common non-inverting configuration (also with high input resistance): 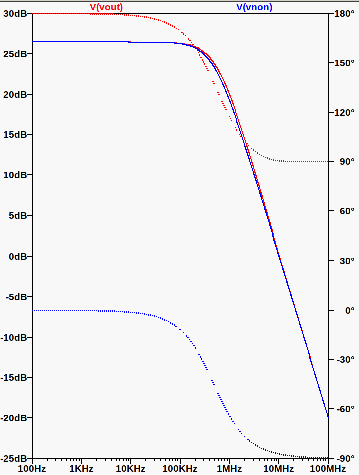 It is worth noting that the feedback doesn't have to be implemented with 4 resistors: 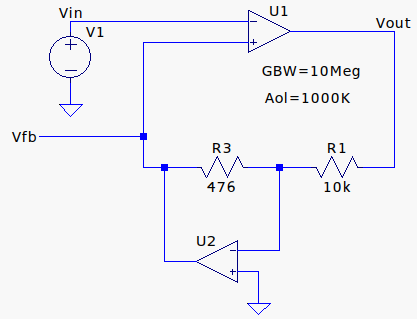 A typical linear supply design, for example, illustrates this configuration.

Note that this is likely an unstable circuit, as the level shift/gain transistor is hard tied to GND (common emitter) and there is neither base nor emitter resistance, so its voltage gain will be quite high (and dependent on operating condition). This should be considered a representative diagram, not a practical example!

But the DC feedback anyway, is in the correct direction. All that matters is that, when the loop is closed, negative feedback is applied, else you get an oscillator (AC feedback) or latch (hysteresis, DC feedback). There is a phase inversion around the loop, and the amplitude (gain, error) reduces when closed. Indeed -- the op-amp doesn't give a fig which inputs apparently move with respect to its output.

The op-amp doesn’t know and doesn’t care. It’s a differential amplifier with a very large gain. As long as the loop you configure will keep the overall system stable, it will work. The loop gain must be negative to neutralize the large positive gain, otherwise you get oscillation. How you get the negative loop gain doesn’t matter: you can do it by connecting output via a passive network with sufficient phase margin to the inverting input, by adding an external negative gain stage, etc.

It is somewhat debatable whether the configuration you mention is “unconventional”. It’s perhaps not shown much in introductory teaching materials, but is rather common in professional designs where the feedback loop may contain active elements.

Not the answer you're looking for? Browse other questions tagged operational-amplifier amplifier negative-feedback or ask your own question.