Is there a known way to parallelize opamps for higher precision?

Say, for example, I have the typical opamp driving a MOSFET as a follower: 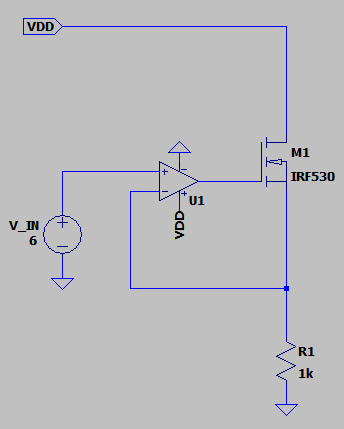 Now, for the sake of the argument, on average, the NMOS is only accurate down to millivolts, & starts being inaccurate in the microvolts. Let's jut say the source node has 5.9993242V.

So this got me thinking, is there a biasing method to "spread out" the work of precision? For example, "multiply" the voltage, say by 1000, & truncate the integer part. Thus, it will be 0.3242V. Then another opamp will work on that value. 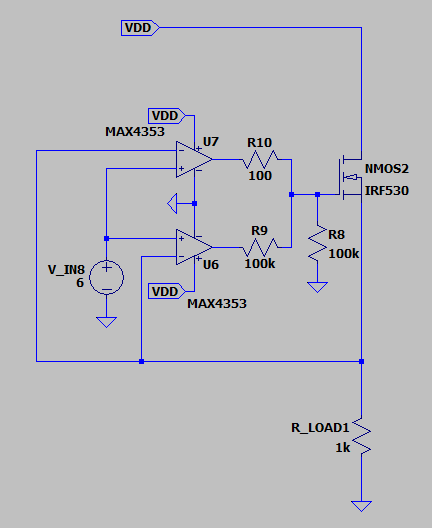 You have a good idea: Parallelizing op-amps is a technique used to improve performance - to minimize noise. Unfortunately, it doesn't really improve their precision - if anything, it usually worsens it, since it's progressively harder to keep all those op-amps at the same temperature.

For DC precision improvements, then the usual thing to do is to start with a precision op-amp, and then work to cancel the errors.

There are several DC error sources. The usual culprits include:

For example, CMRR can be improved by orders of magnitude by bootstrapping the power supply of the op-amp. The finite open-loop gain errors can be improved by cascading two or even three stages. Their AC compensation must be done right to keep it from oscillating. Thermal offsets can be stabilized by putting the whole circuit in an oven. Bias and offset current issues are dealt with by having sufficiently low impedance input sources. And so on.

Even relatively lousy op-amps like TL071 can be cascaded and bootstrapped to yield a buffer that performs well enough at DC that you will have trouble measuring the errors without a 6.5 digit voltmeter at least. And even then - at 6.5 digits, the thermal errors from just the banana cable terminal temperature differences are easily seen. When microvolts are the last digit, just grabbing a short to the voltmeter input in your hands, so that it warms up a bit, is enough to see the drift! To work on such circuitry, it typically takes a climate controlled lab, and lots of time to get things to thermally stabilize. An oven for the op-amps helps too - but then it's tricky getting the signals into and out of the oven without introducing thermal errors...

Most SPICE models that you didn't pay real money for won't be useful at all for evaluating ultimate precision. For precision DC work, it usually takes real hardware to figure stuff out - or expensive simulation tools and models under NDA.

SPICE with typical public models can give you some idea of thermal sensitivities, if the models are suitably detailed, but it really takes transistor-level models to capture it all, and those are not very popular for obvious reasons. To a hobbyist who didn't win a big sum at a lottery, they are simply out of reach.

Not the answer you're looking for? Browse other questions tagged operational-amplifier precision or ask your own question.

-3
Cascading opamps to drive a MOSFET