Ask Question
Asked 1 month ago
Modified 1 month ago
Viewed 206 times
-4
\$\begingroup\$
Closed. This question is opinion-based. It is not currently accepting answers.

Here are two equivalent ways of writing an 8-bit parity generator in VHDL 2008:

The first is a literal translation of the 74180, and the second the most obvious formulation. Assume the first variant is optimized for area and speed (it's in the datasheet) but we don't want to write that because it is more verbose than the second variant.

Can we trust that a good synthesis tool will generate a netlist that is just as optimal as the first variant?

Is the answer that, for most combinational circuits, it doesn't matter if synthesis produces results that are a few percent off the optimal?

The synthesizer will likely always find an optimal solution for any reasonably simple Boolean function.

To be useful, HDL needs to run on some sort of target hardware (either ASIC or FPGA). A good designer will structure the overall logic in their design to make efficient use of the hardware. That's where you will find the most gains. Not by trying to beat the synthesizer but by figuring out how to use it efficiently.

Regarding FPGAs, Xilinx (recently bought by AMD) controls like 90% of the FPGA market, so I will use them as an example.

I don't know of any FPGAs that synthesize AND, OR, NOT, XOR gates directly. Typically, all of your functions are made from LUTs (look up tables). If you take for example, a Xilinx 7 series FPGA it will have 6 input lookup tables.

No matter what the Boolean expression of that function is, any function of up to 6 inputs will most likely be synthesized from a single LUT6 hardware element in one of the slices.

On Xilinx 7-series FPGAs, the logic is divided into units called slices that each contain four LUT6 elements. Each slice also contains hardware multiplexors called the F7 and F8 mux. These mux elements allow you to combine all four LUT6 elements in that slice to make any function of up to eight bits.

So, an 8-bit parity function could be implemented as an 8-bit function made from four LUTs in the same slice + the F7 and F8 mux in that slice. This will give you the highest performance.

An 8-bit parity function could also be implemented as two LUT6 elements chained together. The result of the first 6 bits is calculated in the first LUT6. That output plus the other two bits feed into the next LUT6. This uses only two LUTs but likely runs at about half the frequency (since there is propagation delay from two LUT elements).

A possible implementation of an 8-bit parity function implemented as 4 x LUT6 elements in a slice is shown below. 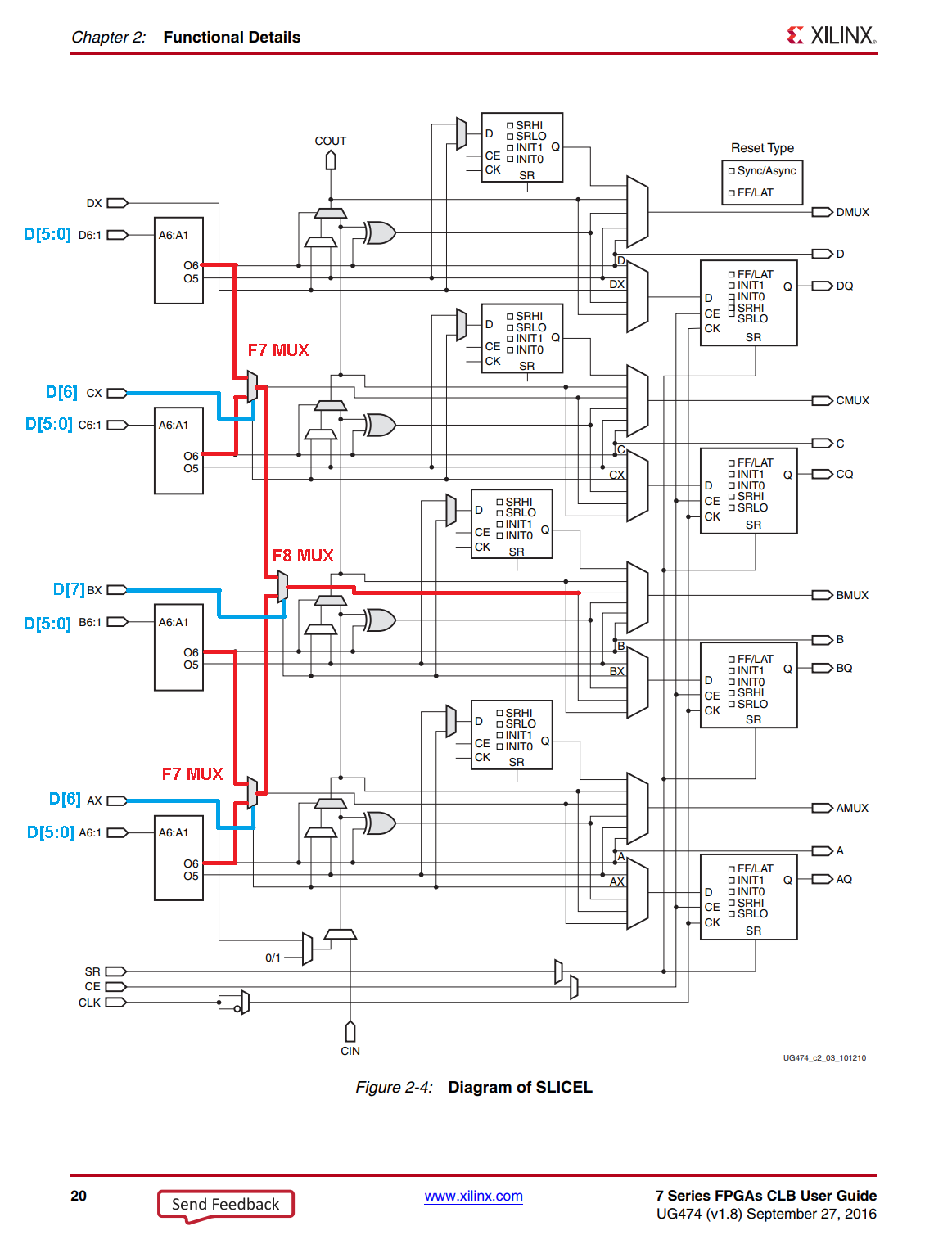 For logic crunching of combinatorial HDL into combinatorial gates i.e. LUTs, then the synthesis tool will produce exactly the same firmware.

I've actually done the exercise you're describing and much more, radically changing HDL and producing the same logic.

This was several times in the past, when I've had to rewrite some existing cryptic VHDL into a new readable source file while ensuring that the compiled result is unchanged. That means compilation produces a programming file with the same CRC. Sometimes I recompiled about 30..50 times, at a guess.

When you involve registers, such as DFFs, in the circuit, you have to be careful what you're changing. But combinatorial paths are fine.

Personally, I think it's somewhat a conceit in the very small strain of engineers who think they'll out-think the synthesis tool and produce better circuitry that it would. If your HDL implies what you want clearly enough, synthesis will nearly always infer the best implementation of the circuit from it.

So it's more about designing circuits in HDL that can produce a practical circuit. Once that can meet the speed and gate count targets, plus allow for any future expansion of it. It's best to put all one's efforts into doing that well.

And that comes down to always designing a logic circuit then implementing it in HDL. Don't write wish-list HDL, instead imagine how the circuit will have to be built, how simply and efficiently it can be made from LUTs and registers. You don't have to actually sketch it out in full gates. But have a rough picture of the blocks involved and how big or slow they might be. Always pick the design that's as simple as possible.

It only matters to humans doing a bit of intellectual sparring to come up with a design better optimised for this, or that, while using a defined set of components. The hardware equivalent of code golf if you will.

In practice, what a synthesis tool does is to meet constraints, with whatever hardware it has available to use. This hardware is rarely simple gates as you show in your question, but larger blocks which often contain multi-input LUTs, able to implement any binary function of a handful of variables.

The typical constraint is timing, is it fast enough? This is not just a local constraint, as the signals have to get through the FPGA routing from here, and get over to there within a constraint. While a designer who fancies himself as a brilliant logic optimiser might make a good fist of designing a single logic block, handling all the fabric delay issues would rapidly make him delegate that drudgery to the tools.

Change vendors, or even families within the same vendor, and the available logic may change totally. No problem to the synthesiser, but it's just trashed all your optimised blocks.