I suppose, this is a continuation of this question: Parallelizing opamps for higher precision

For the moment I'm leaning towards cascading opamps by implementing a Composite Amplifier, albeit a lazy one at it: 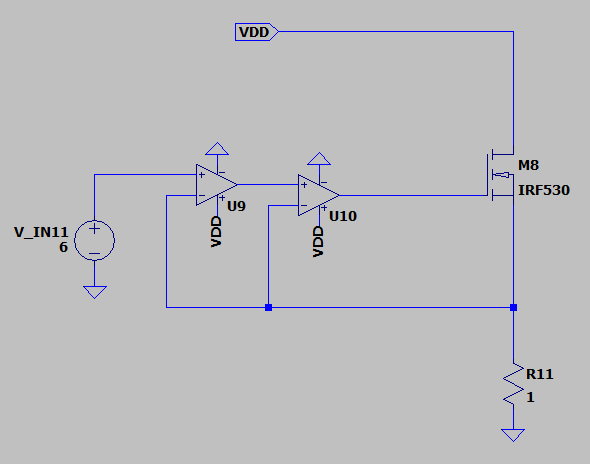 While it lands me smack at the intended \$V_{IN}\$, once I lower the resistance of the load to really low values, the opamps starts oscillating:

My question is, what exactly is the mathematical function that describes what it happening? I'll figure out how to mitigate this.

In the amplifier, would it be something like (pseudocode, definitely wrong):

1 microvolt on an output voltage range of 10V is 0.1ppm. That's firmly in the 7.5-digit voltmeter territory. Whatever you're getting from SPICE for such requirements is pure fantasy, since in an actual circuit all the parasitic effects will play a major role, and you are modelling none of them. Just thermal gradients alone will kill the performance if you're not careful, even if you had an ideal op-amp.

To explore this area, you want to head to the volt-nuts mailing list and its archives, and spend a couple weeks-months of evenings doing serious reading to get some idea of what even is involved just to measure that sort of performance. If you can't measure it, then any efforts at designing will be mostly pointless, since you won't have any idea if your design does the right thing. Yes, SPICE modelling of precision circuits in the 0.1ppm territory is possible, but it requires lots of work, and good working understanding of SPICE modelling. And a very good understanding of the physical implementation circuit being modelled. For a beginner it's not any easier than putting together an actual physical circuit - in fact, it's much, much harder.

I think you are simply misunderstanding where the problems are. They are not in the op-amp. They are, for example, in the expensive interconnect hardware needed to even accurately measure voltages to 0.1ppm level accurately and reproducibly. Just the metrological technique needed to get the same result every time you measure is a skill in itself.

The heat the mosfet will be giving off, and the thermal gradients it generates in the enclosure, will be enough to make 0.1ppm a fantasy, even 1ppm would be a fantasy.

Making such a circuit actually work will require lots of learning for you, and it's not an easy task, and definitely not something I'd suggest a beginner undertake. It's like someone who never played any keyboard instrument wanting to start by playing Chopin's Revolutionary Etude. Sure, you can get there eventually, it's possible after all, but it will take years of work.

So, any idea that you have identified a problem that needs fixing, is also fantastic at the moment. If you want to know where the actual problems that need fixing are, read publications by people and institutions doing research on the Volt standard and related metrology.

Try and get something physical - not a SPICE simulation - that works to 1mV precision over +/-10V output range. That's one-in-20,000 or 50ppm precision. Learn to measure its performance across typical operating temperature range, say 0-50C or something like that. Ensure your results are reproducible, and that you know where all the errors come from, and that you can measure their contributions individually - or at least at some finer level of detail than just "the voltmeter is off by 0.5mV" observation. Then you can try for 10ppm. Once you got that figured out and it is robust, go for 1ppm. And only then even start thinking about 0.1ppm.

To measure voltages down to 0.1ppm, it will be expensive no matter what. Just the cables and interconnect hardware. And you'll need an air-conditioned space with a stable temperature. An underground karst cavern where temperature is fairly stable at 12C may work well if an above-ground location is not available, although bringing a lab down into a cavern is not cheap either... But at least you could bring a car battery, an inverter, a precision voltmeter, interconnects, and the device-under-test, and do stable measurements. Given the temperature difference from above-ground/indoors, the equipment will need a week+ to stabilize at least. Everything will drift like crazy in the first days... And also, if the cavern is not open to the public, forget about going into one without training and equipment needed to do it safely (PPE, gas detectors, etc. - none of it cheap).

Not the answer you're looking for? Browse other questions tagged operational-amplifier mosfet drive or ask your own question.