To drive current with open-collector gate when input is high, do I need a buffer or an inverter?

So if I want to actually run current through it in the High state of the input, do I need an open-collector buffer or an inverter? To add to the confusion, some parts descriptions say "octal buffer/line driver, inverting outputs" (74LS756). Why not call it an inverter then?

If you held a pistol at me to guess, I would guess I need an inverter, because in TTL speak Low means sinking current, and High means potentially sourcing current. But since open collectors are used to drive current, I could just as well be wrong.

What is the right logical argument to imprint into my mind to never again forget this coin-toss answer?

Below is a schematic. 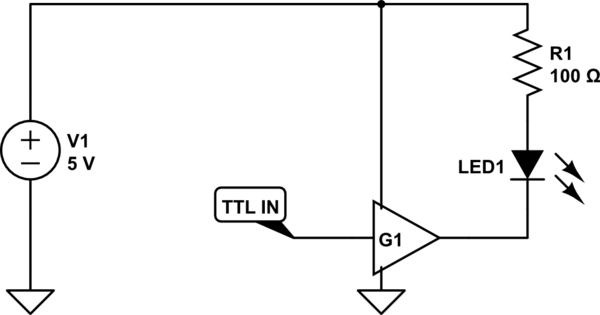 In this schematic I represent my gate as a buffer, not an inverter, and my question is whether a buffer or an inverter needs to be used.

Yes, sounds like you need an open-collector inverter. Or just a plain old transistor: 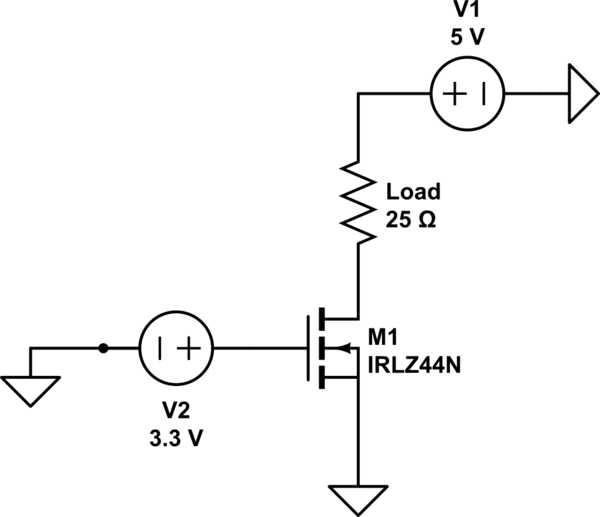 (V2 can be most any logic level signal, and M1 must be a logic-level type MOSFET. V1 and Load are unimportant, so long as M1's ratings are respected.)

OK, I just answer it myself. The clue is to look at the schematics of 74LS05 hex inverter with open collector. Can't get much easier than that: 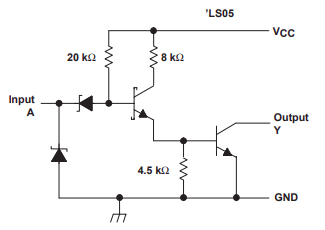 Now, if this is called an "inverter", it means an inverter with open collector is a gate which when given a Low input causes the output transistor to shut off, i.e., when used with a pull-up resistor on the output, it would cause the output to be High.

Therefore, if what I want is to sink a current (e.g., to turn on an LED) on High with an open-collector, then indeed I need an inverter! But the state of the output transistor sinking current is Low. So a Low state on an open-collector output means current is flowing.

Now, to never again forget that, the thing to remember is that in all TTL (and I suppose CMOS logic) for a pin to be Low means it sinks current. For a pin to be high means it does not sink current, and optionally emits some current on its high voltage. This is the same regardless whether its a High driven gate or an open collector gate. Low = sink current. High = output voltage is optional.

I will add the use case that I had in distant memory was those Nixie tube drivers, that say H H L H H H H H H H for "2" in their truth table, meaning low sinks current, output transistor on, so that the 60V or whatever high voltage can be sunk driven by 5V TTL input signal that is high. I think this is also why 3 to 8 line selectors (74LS138) are output active low and this, in turn, I believe, is why all memory chips have come to use active low signals of /CS, /OE, and /WE. One would really wonder otherwise why else the first maker of memory had decided to just flip a coin to make his control inputs active low, he didn't say "let me confuse people in posterity by saying 'if you want to turn it on, give it a zero and not a one!' [evil laughter]", no it's because the selectors were intended to primarily sink current to drive Nixie tubes on higher voltage.

This is also why I think it is misleading to teach that TTL "High means high voltage" it is better to say "Low" means lower potential so that current flows into the gate onto lower ground. "High" means that the potential is high so nothing flows down. Most standard gate outputs can sink way more current in Low state than they can spit out in high state.

Not the answer you're looking for? Browse other questions tagged digital-logic ttl open-collector or ask your own question.