Why is there a current in R1 in this MOSFET circuit? Isn't it supposed to be zero?

When I run a circuit simulation, I get a current in R1 which is around 16 mA. Isn't the current supposed to be zero, since this is an N-Channel EMOSFET, which I also think is symmetrical? 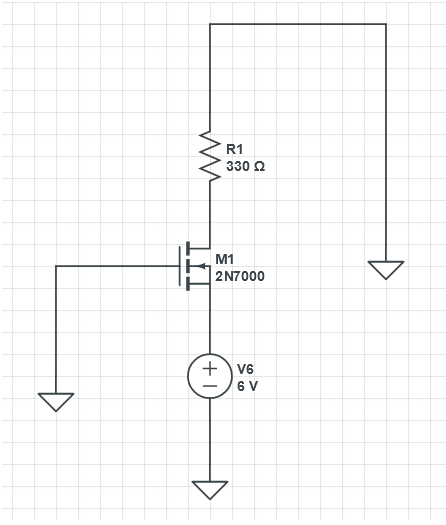 MoondogMoondog
8144 bronze badges
New contributor
Moondog is a new contributor to this site. Take care in asking for clarification, commenting, and answering. Check out our Code of Conduct.
\$\endgroup\$
1
Add a comment  |

You can see this more clearly if you look at the device symbol with the body diode shown explicitly (from here): 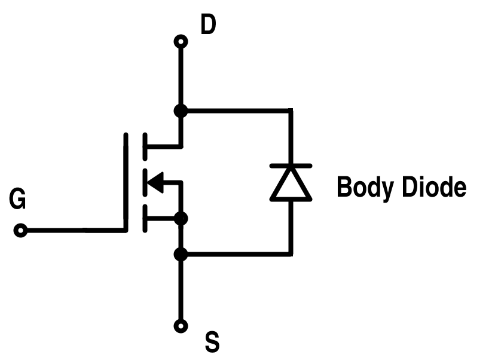 Just about all commercially available power MOSFETs have a body diode as part of the structure, so you have to keep that in mind when applying them. If you need to block conduction in both directions one option is to use back-to-back FETs.

You are forward biasing the bulk/body diode inside the MOSFET and, that will cause about 5 volts to appear across R1: -

The diagrams with piggy-back diodes always amused me; does no one teach kids anymore that symbology means anything? Well, apparently not. Matter of fact, I don't think anyone told me when I was in school, I had to figure it out myself. Well, go figure, then.

So, on that note, it's as simple as this:

BJTs show the emitter; the collector can be drawn the same way (as a "double emitter" symbol), but one is usually left off to denote the asymmetrical junction, suggesting the direction of intended flow. (Transistors haven't been symmetrical since the germanium days!*)

*With some exceptions, or near exceptions. But by and large, diffused and epitaxial BJTs have low Vebo and much higher Vceo, among other effects.

JFETs, show the gate-channel junction. UJTs (back when they were relevant, heh) likewise; just drawn differently to imply the different function/behavior from JFETs (which they are otherwise fairly similar to, structurally speaking). The right-angle line segments to the FET channel suggest ohmic connections rather than rectifying (Schottky or PN) junctions.

And MOSFETs use an arrow, just as well. The substrate-channel junction, or "back gate", is the middle connection. The channel is the three line segments in a row (sometimes they are drawn as a solid line, particularly for depletion-mode FETs, which are "default on", hence a continuous line, eh?). Normally, substrate is tied with source, but this doesn't have to be (rarely, discrete parts are available this way, and it's the standard method in ICs).

You'll note sometimes a "MOSFET with emitter" sort of symbol is used. This newer style is all the more grating when you realize what the arrow is supposed to mean... Alas, that meaning has, it seems, been widely lost to time.

So, needless to say -- your diagram shows a diode from V6 to R1; but at least now it should be apparent. Cheers!

The symbol of the device includes everything needed to figure this out. The various parts of the symbol represent functional features of the device: