Is the overvoltage protection used in this circuit a normal way of doing it?

The circuit is from a clip on YouTube. VCC is from a stepper motor generator and varies between ~0-30 volts DC.

From what I understand, and please correct me if I am wrong, when the voltage gets too high the opamp goes high and the MOSFET opens and shorts the caps through the MOSFET itself. The guy in the video adjusts the activation threshold to be around 5.4 volts to match the maximum of the caps.

I am not sure if this is a normal way of doing this kind protection and I can't really find anything on Google about this specific setup.

It seems a bit strange to protect the caps by shorting them, but I have no idea how this is usually done.

Long story short, is this a good/normal way of doing this? If it's not normal, how is it usually done, and what sort of issues could arise from this?

Is the overvoltage protection used in this circuit a normal way of doing it?

I've seen it done this way. It's basically equivalent to a programmable zener diode i.e. nothing is shorted out; if the voltage exceeds a certain value, the MOSFET starts to turn on to try and regulate the voltage on the line. In other words, it's a shunt regulator.

what sort of issues could arise from this?

The main problem is that the source impedance of the supply isn't shown or known and, for this circuit to work (without burning/failing the MOSFET), the maximum power delivered to the MOSFET has to be analysed and an appropriate heat-sink attached to it.

Because the load capacitance (8.25 farads) is quite high; its stored energy should also be taken into consideration when estimating the heat-sink size.

That's not what will happen unless the MOSFET overheats to destruction because then it will likely form a short-circuit.

Bad, but could be marginally acceptable depending on what you are trying to protect from.

The reference voltage from the 4 diodes will change a lot over temperature.

If the overvoltage is constant, the MOSFET will dissipate a lot of power, possibly enough to fry it, even with a big heatsink.

So, if the voltage source is weak and your threshold can have a lot of tolerance, then this might work.

If you are trying to protect against a failed power source, then research overvoltage SCR crowbars.

Besides the shunt regulation addressed in other answers, there is one more point of bother.

This only works well if the caps have the same capacitance.

If they don't, they charge and different rates and one cap could reach its maximum rating while the sum of their voltages is still below 5.4 V.

Capacitors have rather big tolerances, so it is advised to monitor the individual capacitor voltages.

This is a simple shunt regulator.

Shunt regulators are often used in solar power systems because they can be more efficient at full load and also allow the solar array to run cooler as the excess power is dissipated in the shunt rather than in the array. The downside is that the transistors in a shunt regulator can require more cooling than a series regulator. Usually there would be a power resistor in series with the transistor to dump the excess current into.

You can see this article for a comparison of the two.

I can't say for sure why this circuit is being used with a generator and what appear to be supercaps, possibly because of the wide range of input voltage or the high capacitance load. It might just be a demonstration of a shunt regulator, the original video wasn't linked, perhaps there's a clue in it.

You could put in a similar approach with balancing over the caps, like this circuit: 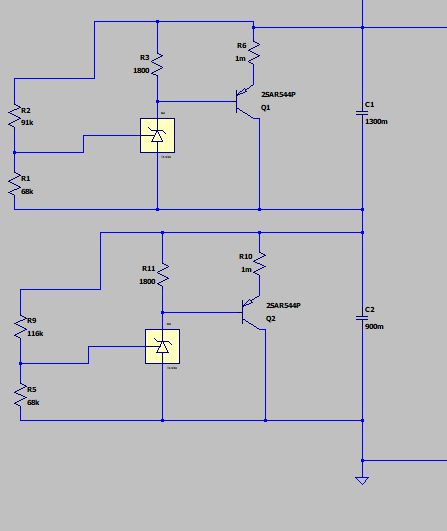 Voltage reference provides some temperature stability and the balancing prevents damage to caps in case they differ in capacitance.

Transistors need to be picked according to how much power you expect to dissipate.

what sort of issues could arise from this?

In addition to the issues already mentioned:

First, a stepper used as a generator is going to have a torque that's roughly proportional to current draw. With a shunt regulator like this, if you turn the stepper fast it will start feeling really draggy.

This may be a good thing if you also want to semi-passively limit the speed of your generator and don't mind wasting energy to do it (i.e., if you have a windmill or other energy harvester that can't store up energy that's not used).

Second, it'll very likely oscillate as it's limiting voltage. It may be tolerable, but it'll still do it. That circuit puts an uncontrolled amount of gain inside the loop, with a lot of phase delay. I'd have to think about what a properly compensated circuit would look like there, but it'd involve additional resistors and probably a cap, to limit the overall bandwidth in an effort to achieve a stable circuit.

I built a similar device recently, linked below on my website, for maintaining a lead-acid battery at safe (or, at least not rapidly destructive) voltages:
https://www.seventransistorlabs.com/Images/ShuntBallast.pdf

Note the design differences and commonalities:

Thus, hysteretic regulation occurs, allowing the voltage to rise due to charging current, tugged down periodically by the resistors.

The OP circuit should integrate either this feature, more concretely (to be clear: it WILL oscillate, like this circuit, but in a much more poorly controlled manner); or apply negative feedback and gain limiting, to allow stable regulation.

Compensation can be done by adding a series resistor between the diodes and -IN, and a R+C across the amp, from -IN to OUT. A source resistor is needed under the MOSFET, to limit its transconductance.

The diode stack should also be changed to a TL(V)431, which is more accurate than the diodes, which exhibit a strong negative tempco. This last step isn't really needed, but it saves on parts, and has a better result, even if tight regulation isn't really required for the application.

Bad circuit. The threshold will happen fast and the FET will turn on and burn up. Also, the 3K resistor in the gate circuit is not needed.