I'm trying to design an ADC protection circuit in order to measure a few voltages (a USB Bus, a wireless charger output, a battery, etc.) on some GPIO pins limited to 1.8V. There are quite a few other questions on here about ADC protection, but most surround the use of zeners, but I liked the idea of using a voltage follower instead as it also brings all the benefits of isolation they provide from the rest of the circuit.

I'm planning to use the MCP6001 for the voltage follower.

Reading through this article from Analog at the bottom there is a circuit shown below: 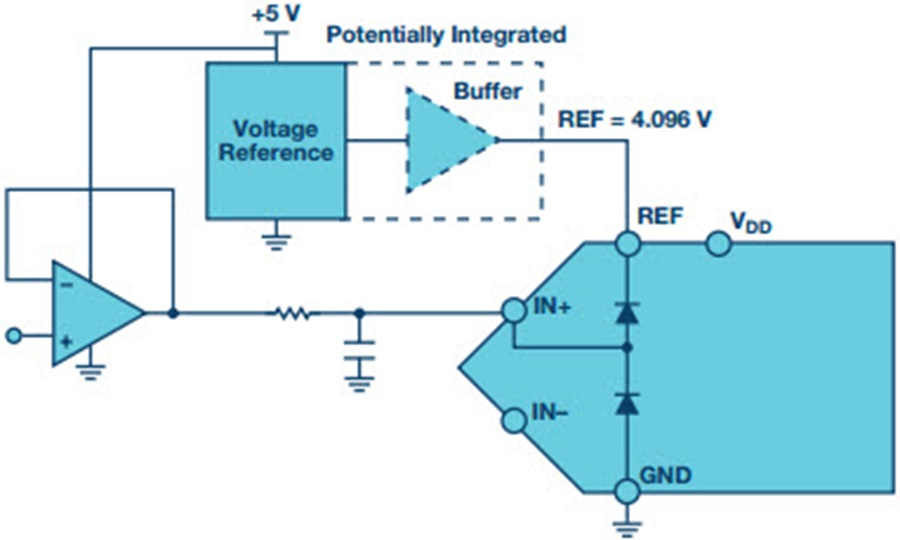 for protecting ADC inputs. They state:

Another possibility, as shown in Figure 5, is to use a slightly lower reference value (for example, 4.096 V when using a 5 V rail), resulting in significantly reduced voltage overdrive capability.

Why set REF to 4.096 rather than 5V? Wouldn't that lead to an overvoltage condition being impossible?

I also have a question regarding the RC filter used. In the article they state:

The series R in the RC filter between the amplifier and the ADC input can also be used to limit the current seen at the ADC input during an overvoltage condition. However, this will be a trade-off between current limiting and ADC performance. Larger series R will give better input protection but result in greater distortion in the ADC performance. This may be an acceptable trade-off, especially if the input signal bandwidth is low or the ADC is not being run at the full throughput rate, as more series R can be tolerated in this case. The size of R acceptable for the application can be determined experimentally.

I don't understand a few things about this paragraph and hoping someone can answer them:

Using the power supply rail as a reference is generally unsuitable for high performance applications. Using 4.096V allows 900mV of headroom for the reference IC to work with. Your 5V rail might have a tolerance of a few percent, and a lot of drift and a lot of noise. The 4.096V reference output can have a much tighter tolerance (0.1% or better) and low drift and noise.

The choice of 4.096V as opposed to, say, 4.2V is related to standard reference voltage chips produced to have even mV per LSB (eg a 12-bit converter would be 1mV per LSB with a 4096mV reference).

Limiting the current- the diode limitations are described in the document, although having a diode to the reference input strikes me as unusual and sub-optimal. More often you could have diodes to the supply rails and the supply could be a filtered version of the 5V rail. Perhaps for high performance (eg, high speed) ADCs there are reasons for that internal diode arrangement.

I think this application note answers your question about distortion: https://www.maximintegrated.com/en/design/technical-documents/app-notes/1/1948.html