Can more fan-out be achieved with two inverters, and if so, how to choose which path?

This is a pretty theoretical question. My interest is digital circuits for CPU design.

Let's say I have some digital CMOS circuit composed of 50 transistors that implements some logical function. Let's say the practical fan-out limit of this circuit is 4, but I really need to connect it's output to 5 other gates.

Can I use a couple inverters on one of the output paths to "buffer" the signal and make it strong enough to drive the load? (That would be way better than duplicating a 50-transistor circuit.) And if so, how do I choose which path is the best choice for that double-inverter (or does it matter at all)?

I'm assuming that your existing circuit cannot be modified, e.g. to use a higher-fanout pcell for its last gate or duplicate its output stage as td127's comment mentions.

Can I use a couple inverters on one of the output paths to "buffer" the signal and make it strong enough to drive the load?

Yes, buffering is an approach which is used in practice for high-fanout nets. I'm not sure off the top of my head whether this is just two inverters, or a more dedicated buffer pcell (my expertise is analog and my digital VLSI design knowledge is much more limited)

And if so, how do I choose which path is the best choice for that double-inverter

Propagation delay and timing analysis are relevant here. If you can buffer the path with more timing slack (on the setup path) you put the propagation delay of your buffer in a place where it affects your final performance less; likewise if skew is a concern the paths to buffer may be chosen so as to reduce the skew.

Sorry i don't really understand load and impedance at a fundamental level yet. Impedance is supposedly resistance combined with reactance, but these are DC circuits so that alone boggles my mind as to how reactance plays a role.

First, these aren't DC circuits. They have a DC component, but switching a signal between low and high is an AC phenomenon.

For CMOS, your load is quite reactive, since each gate input looks like a handful of capacitors. Here's a simple inverter with its major parasitic capacitances drawn in red: 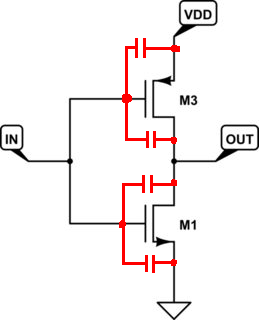 These capacitances form the reactive load that we're concerned with when we talk about fanout - the gate-source capacitances show up as-is, while the gate-drain capacitances look even bigger than they are because they interact with the gain of the inverter. When you add up all of these effective capacitances (which are in parallel) across every load in the fanout, you end up with a total capacitance that the prior stage needs to drive; call it \$C_L\$.

We can roughly approximate the output transistors of the prior stage as a voltage source with an output impedance \$R_o\$, and we notice that the capacitors require a bit of time to charge, with the charging time proportional to \$C_LR_o\$. This is precisely why fanout is important: more \$C_L\$, more time needed for a given \$R_o\$. Too much time taken, and you're violating timing specs.

like if any one path is more "in need" of load help than the other.

If one path has a really long interconnect line, it could be worth buffering, since that interconnect line itself contributes parasitics including parasitic capacitance. I don't know what the relative contribution would be, since I haven't worked with long digital interconnects, and it depends on your silicon foundry process anyway.

3
Convert fan-in-2 fan-out-3 NAND gates to FO4
9
How is frequency chosen?
2
Unbuffered vs. Buffered CMOS Circuits
0
How does an output switching from HI or LO to HI-Z affect an input in CMOS?
0
CMOS logic Gates XOR
0
Correct configuration for CMOS inverter
2
Is there possibility for a race condition in the following circuit?
0
Why do we always implement the complementary of the boolean expression when we design a CMOS circuit?
0
To drive current with open-collector gate when input is high, do I need a buffer or an inverter?