I have two outputs of a voltage source that do ±10 V with 16 bit. This leads to a theoretical resolution of a bit step of 0.3 mV. My goal is to have more resolution by using a voltage divider of 100 on the second output and combining the two. This would give ±10 V with 3 μV theoretical resolution. This voltage will be used to charge up a capacitance <10pF. The adder will be nicely shielded and will be sitting at a temperature of 4 Kelvin.

The only problem is that I am seeking is adding the two voltages WITHOUT using active components, as transistors add noise and there is only a thermal budget of about 0.1 mW (less is better).

The whole passive network doesn't have to be perfect at all, though. The only object is to have more voltage resolution in the end.

I played around with resistors in LTspice but didn't succeed yet. I would be happy to get some new ideas.

It's not possible to exactly do addition with voltages sources as you describe, but you can do a weighted average, which should fulfill your requirement. 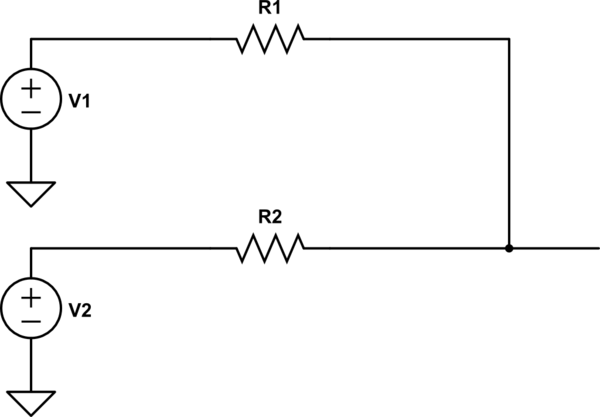 The higher the ratio, the less effect resistor tolerances have (and one would expect some change in resistor values from 300K to 4K temperature). A high ratio will also minimize the power dissipation in the resistors for a given output resistance, which is:

You might want to calculate the actual J-N noise of the combining resistors over the BW that actually makes it into the cryostat before doing this. Compared to the ADC output noise. It could well be that combining them at room temperature is better, say with a 10 ohm resistor and a 100k ohm resistor.

The solution is to not add, but divide the difference between the two voltages; instead of dividing the second DAC down, you could just do the voltage divider between the two outputs.

Another note: this sounds like your DACs are rather high-grade, so chances are you're operating them with an external voltage reference. Your second DAC could generate the voltage reference for the first!

Note you will have higher resolution, but not higher accuracy ==> using 100:1 will mean that there will be overlap between the settings for a desired output.