How to daisy-chain boards in a PCB stack

I'm looking for a connector that is both daisychainable and lightweight (and possibly, thin). Currently, I'm using ribbon cables (male pin header and IDC female connector) and using the same cable to connect to other PCBs. My project has 5 PCBs, with the maximum connectors-per-cable being 5. The current solution is pretty heavy, mainly because the connector (cable and PCB). Here is a pic of my current solution: 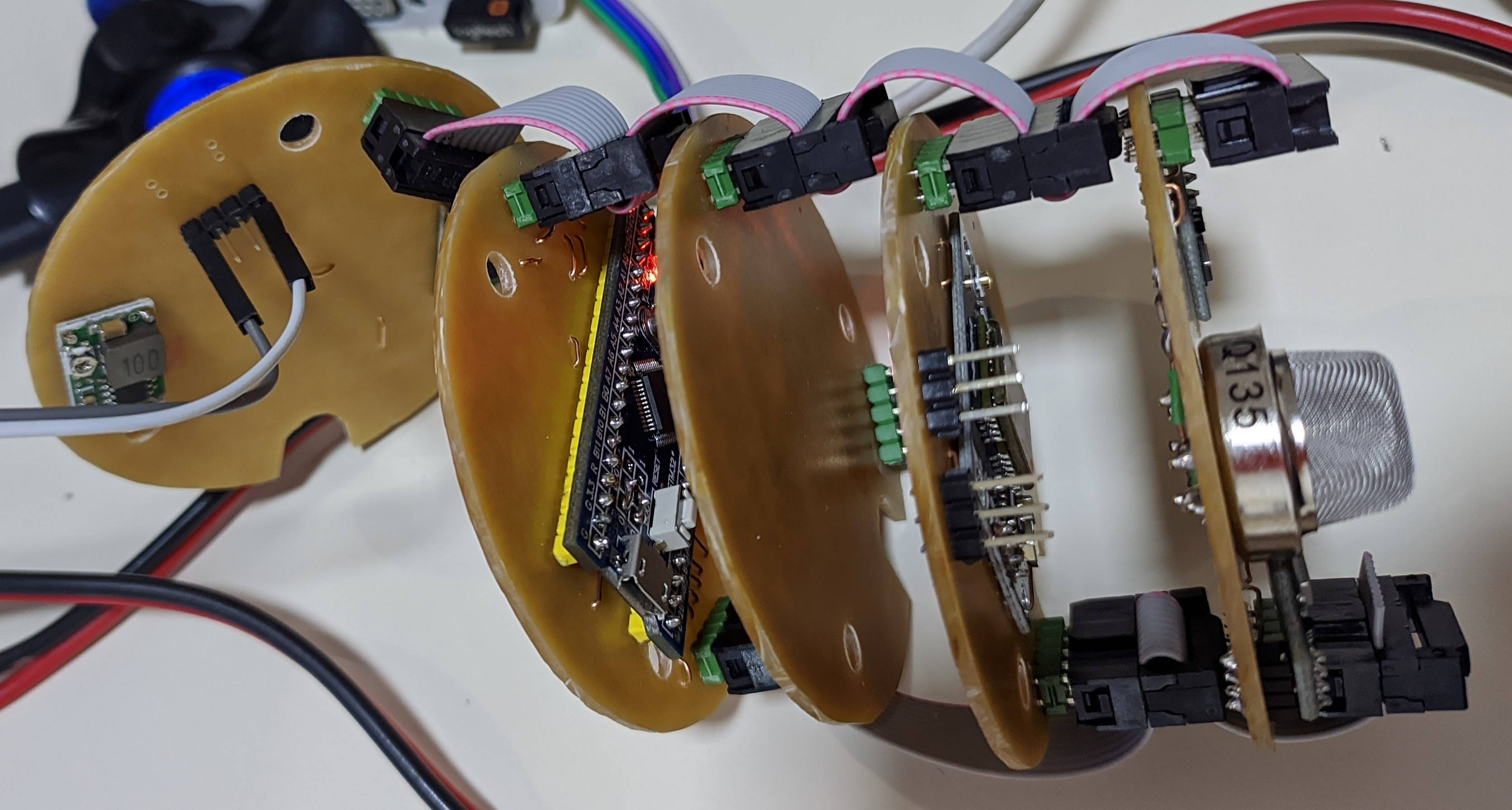 I first thought of using flex cables, but the ones I know arent daisychainable, so I think its not an option

EDIT Some points I forgot to say that are important:

Here is a sketch of how boards are laid out and connected: 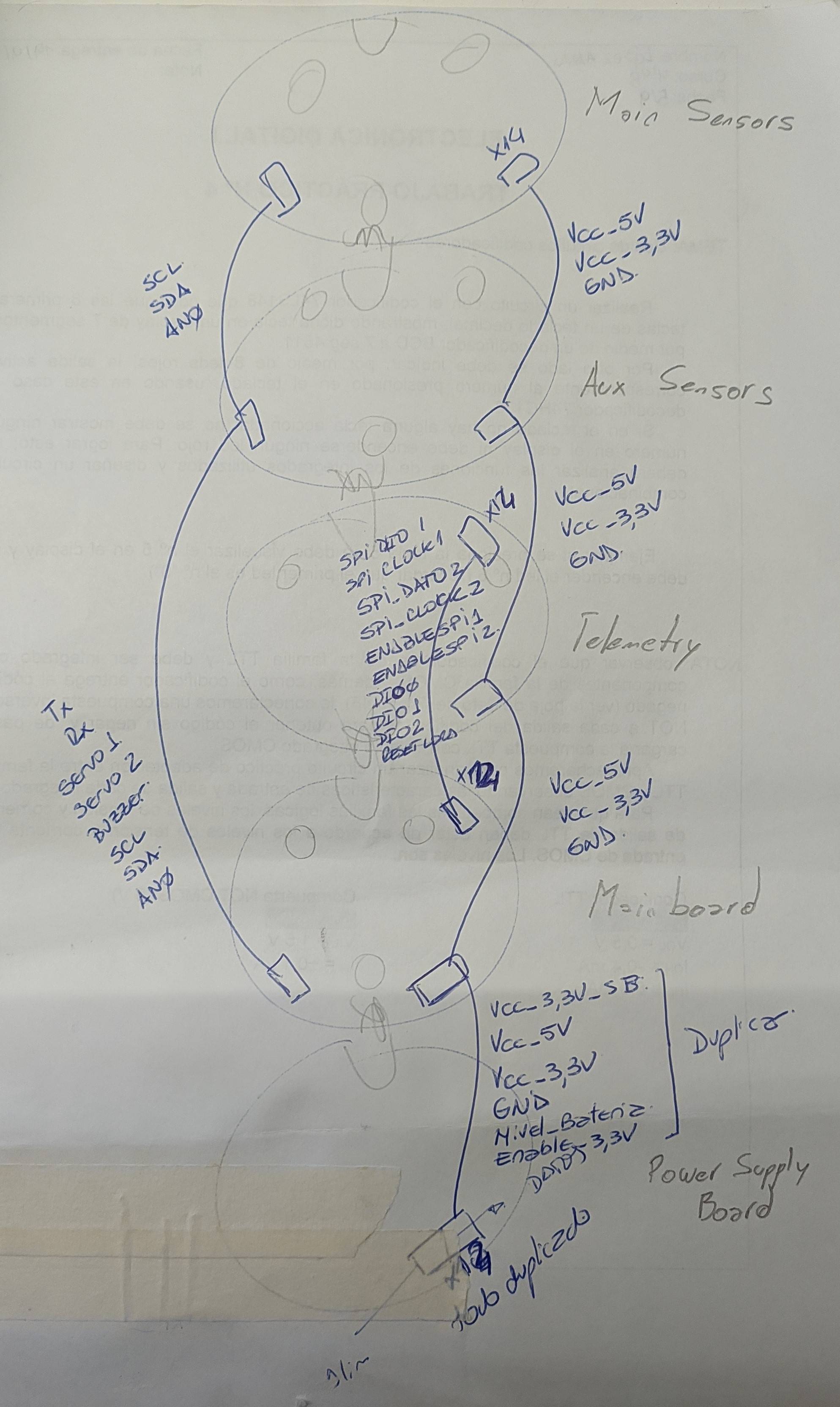 For the moment, a potential (but ugly) solution, mught be to just use some THT FFC connectors, and when daisy chain needed, just peel the insulation a bit before the end, and just solder them to each other, or, remove the insulation on both sides and plug them onto a single connector. We have yet to test this solution for reliability and possibilities to get disconnected

The standard solution is to use stackable female PCB headers with long pins. 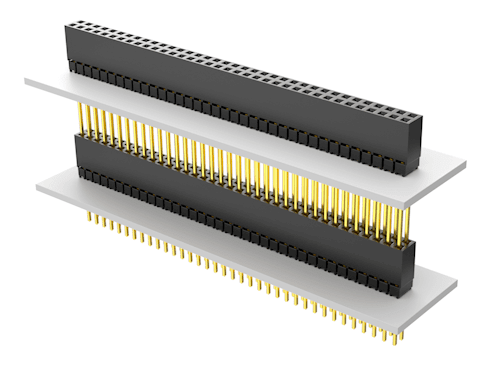 Of course, you can do that with smaller connectors as well. It looks like you may be use 10 circuits on each side.

Reading your comments, I think this might be useful:

It cannot be unplugged, so you need a loop in the wire for disassembly but it is very robust dealing with vibrations and it is lightweight. You can use it on single layer boards.

So, I might have had a bit of a ramble in the comments. I think that adds up to an answer, so let me answer here:

These boards look like a lot of work, engineering and generally thought went into them. Nice work!

But: the fact that they are single-sided, probably hand-etched is limiting you here, seriously: if you found stackable connectors, you'd end up having to drill very precisely to make the holes in your board stack align. That's why your ribbon cabling is actually a blessing: it allows for pretty arbitrary tolerances.

Now, that's not too bad a problem: your tolerances already seem to be pretty good. However, I'd still, for the sake of your own sanity, and because in my experience, it ends up saving cost, re-design your boards to be manufactured by companies like oshpark (USA), aisler (Europe) or JLCPCB (China, probably the cheapest of these), for less than 5€ a piece. You get sufficient tolerances, two-sided boards, where you can basically dedicate the bottom side to proper ground connections and put arbitrary, even SMD, components easily on the top side. And the traces can be much thinner and still reliable, your holes/vias very reliable and plated, and you can put a much wider variety of connectors on and/or through the board.

Now, I'm going to suggest that you could simple male/female pin header connections between these boards, if you let go of the idea that the connector has to be daisy-chainable.

Same principle applies to just alternating between two different positions for the top and bottom connector.

When you get custom PCBs with solder mask made, you can use nice mezzanine connectors such as this receptable/plug things; since they only use one side of the board, you wouldn't even have to do the "Helix" trick. 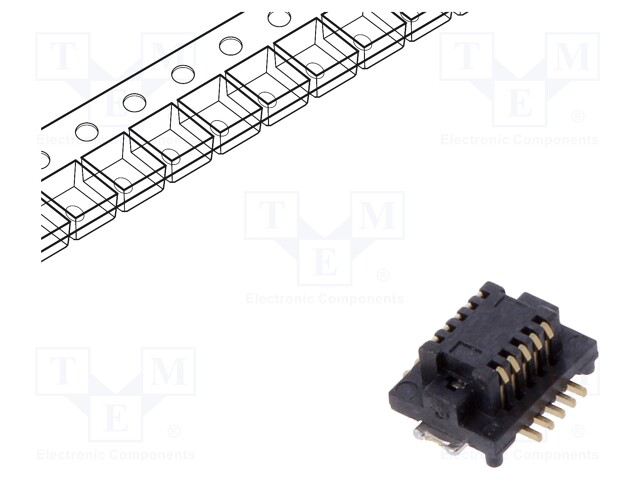 Another common method is to make the connection between the boards a PCB of its own – commonly, even, a flexible PCB, exactly to deal with tolerances and vibrations more gracefully. But solid "backplane" PCBs are just as common! Just requires right-angled connectors on the stack's PCBs; these exist in the shape of pin headers, but also for a lot of other designs.

This would also work for your ribbon cable, by the way, but that wouldn't solve the weight issue. If weight is actually an issue (assuming this goes air- or even spaceborne), there's little way around actually leaving the inherently low-density single-sided boards behind, anyways. You're wasting a lot of space and mass on something most likely pretty easy to build, still well-structured, on maybe two of your boards. I'm especially looking at the microcontroller board (a "Blue Pill" if I'm not mistake) there; that's really just a cheap microcontroller with a 3.3V regulator and a USB connector and a button on a PCB, and you could have just dropped the same microcontroller on your PCB yourself, at less than 1 cm² of space, no extra PCB, no extra connectors (if air/spaceborne: vibrations are no friends to your connectors!).

Second to that, I would find SMD male and female headers and use those instead.

Something to keep in mind is whatever SMD header you use, if it has mechanical support posts these cannot be longer than half the thickness of the board or they two connectors on either side will interfere with each other.

I do not recommend stackable headers if you need a longer header more than a few pins. I used a 20x2 headers like these in a 48 board stack and it was a massive pain in in the ass to disconnect them since if you do not pull them straight out, they will jam and lock up especially with wide connectors. With so many pins, the force to pull them apart is considerable and their long length makes it so being even a little bit off angle will cause them to jam. –

The overwhelming thing that was going through my mind when I had to spend what must have been accumulated to be at least an hour each day struggling to plug and unplug my board stack was the ease at which the boards could be unplugged. And that was usually with a stack of 6 boards, not the full 48.

I should have also used edge connectors or castellations for the programming but I got lazy when laying out the board. I paid for that later on by needing to unplug all the boards whenever they needed reprogramming.

If you want to use flex (flexible printed circuit board) for this bus interconnect, double-sided flex (with vias) can probably do what you want by having the bus on one side and the branches that go to the connectors on the other side.

This would be a custom intwerconnect flexable circuit, you draw it in software like kicad amd order online, it will probably cost less than $10 each for if you buy 20 pieces. (also cost your time to design the board)

Alternatively you could do a rigid-flex combination with rigid and flexable parts permanently connected, or even put all the components on flexable PCB.

If you you want to stay with 1970s technology you could use a rigid PCB for the bus and put edge-connectors on it.

4
How to re-solder fine broken flex cable connection to pcb
2
How to uniquely identify which PCB is plugged in / connected
0
Which connector system for serial row of PCB plus cables?
5
Temporary PCB connections for testing
1
PCB surface mount alternative for JST-XH connector
1
45 Degree PCB to PCB Connector
2
Ethernet: best placement of magnetics and PHY IC in multi-board stack up