How can I analyse this circuit (analog PD controller)?

We had op-amps at school but I do not know how I can go about analysing this circuit because it has an additional node in the backwards branch. For me, I can not see why the capacitor is inside a closed loop, so I would not expect any voltage drop across it or current through it. Does somebody maybe know how you can go about analyzing this circuit? I want to know how I can calculate the output voltage (out_1-out_2), because the goal is to find the transfer function ((out_1-out_2)/(in_1/in_2)). Thanks a lot for a reply! 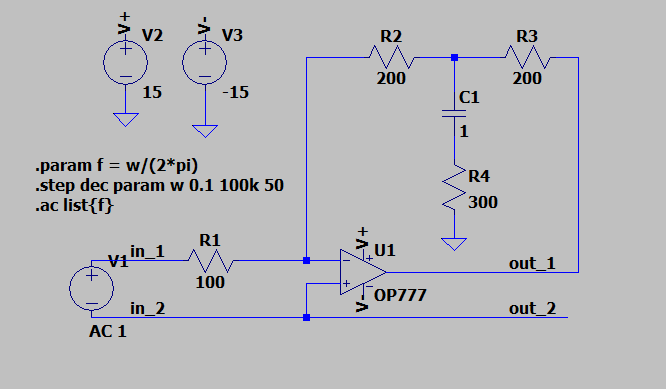 Edit: It says that the relationship between GND and out_2 is given by this Bode plot:

Your circuit has no path to any fixed DC potential, such as ground. It looks like C1 and R4 provide such a path, but at DC C1 effectively disappears, and therefore there is no path to DC anywhere, and everything is floating.

To fix this, I'll assume that IN2 and OUT2, which are the same node, have a fixed potential, 0V, and the circuit becomes: 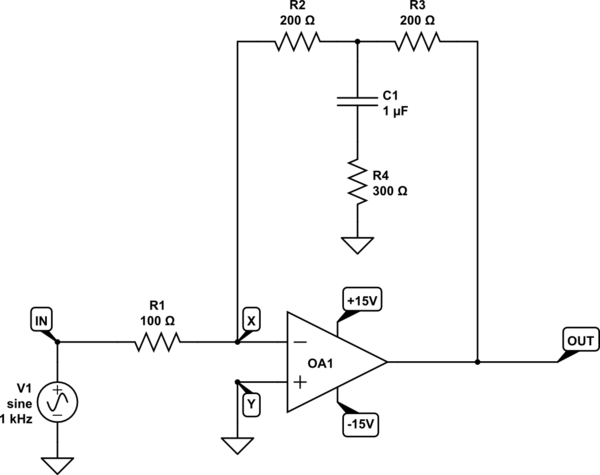 We have shifted input and output signals down to ground, ensuring that the op-amp operates within its acceptable common-mode input voltage range. It may seem like this changes the behaviour of the circuit, but it does not, since all we have done is replace terms \$(v_{OUT1} - v_{OUT2})\$ and \$(v_{IN1} - v_{IN2})\$ with \$v_{OUT1}-0=v_{OUT}\$ and \$v_{IN1}-0=v_{IN}\$. The offset \$v_{IN2}\$ common to both could really be any potential within the op-amp's power supply range, but setting it to zero simplifies the arithmetic.

At DC capacitor C1 has infinite impedance, and the circuit can be redrawn and analysed as if C1 and R4 were not there:

As input signal frequency rises, the impedance of capacitor C1 falls, and the combination of C1 and R4 may no longer be neglected. To keep analysis simple, remember the usual behaviour of an op-amp with negative feedback is to raise or lower its output by whatever amount is necessary to equalise the potential at its two inputs:

Note: We are also assuming that the feedback can never have a phase shift sufficient to become positive. That might be possible at very high frequencies, and with certain op-amps, but analysis at such frequencies is another topic.

Considering the op-amp to be a voltage source of \$v_{OUT}\$, which is always the exact potential needed to obtain the condition \$v_X = 0\$, the network consisting of R1, R2, R3, R4 and C1 may be redrawn, and analysed using the usual Kirchhoff's and Ohm's laws to establish the conditions present, given some arbitrary \$v_{IN}\$:

I'll spare you the arithmetic, but combining those equations gets you a transfer function that looks something like:

The numerator is zero when:

There's also a pole, when the denominator is zero:

Because the zero we calculated above predicts a gain increase at this same rate, this pole's downward slope effectively cancels the upward trend from the zero, and we can expect a constant gain at frequencies well above 530Hz.

If we make the substitution \$s = j\omega\$, we can plug in values for frequency \$\omega\$ and find the gain at that frequency. We already calculated the gain at DC (\$\omega=0\$), but let's confirm it here:

That's what we saw before, but technically gain in the frequency domain is the ratio of amplitudes of output and input signals, which is the magnitude of this (potentially complex) result. So to be more correct:

Similarly, we can find the gain at very high frequency (assuming the op-amp has infinite bandwidth; in reality gain will drop off as the op-amp's limits are reached). As frequency approaches infinity, the transfer function's numerator and denominator are dominated by the imaginary terms, which become huge compared to the real parts. The function tends to:

You can clearly see the op-amp's limited bandwidth causing gain to plummet after 100kHz, but prior to that, gains are as we calculated.

The complete function (green) seems a little complicated.
But out_2 for what use?

Added the case where "out_2" is driven by "voltage" with internal resistor.

Try this topology ... (pot are used for varying "importance" of P or D effects)

2
Measuring the bode plot of an op-amp circuit
1
Understanding s-domain poles, negative frequencies and bode plots
1
Finding the transfer function of an non-inverting audio op-amp
2
Does this Root Locus analysis contradict my understanding of Nyquist stability criteria?
1
How to generate desired voltage signal in a circuit?
0
ULN2803 behavior when its output is not connected to any load in this circuit?
2
Simplification of ideal op amp circuit
0
How can Gilbert Cell circuit provide linear gain variation even though ID-gm relationship is nonlinear?
4
How do you solve for the voltage at A on this op - amp circuit?