I want to output 12V 45 watts to turn on a 12V 45 watt LED (motorcycle headlight). The image given is schematic of my target project. I need to draw only 15 watts from the battery and the rest of the energy will come from the "Rectified AC Source". If I just connected them in parallel the battery could be charging itself even draw all power from the battery. But by some magical way I need to draw only 15 watts from battery and rest from the AC source.

The AC source is just motorcycle's headlight socket's power. Which produces 30 watts at most. (Since the existing bulb is 30 watt halogen.) 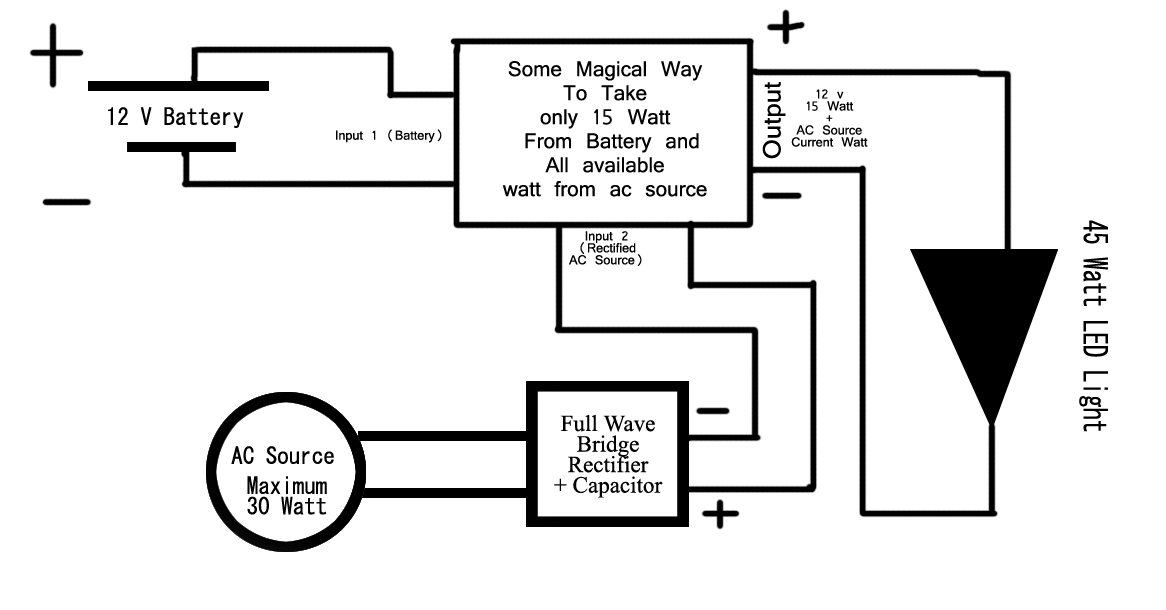 Since the alternator is an AC source, we get pulsed current behind the rectifier. The battery can fill the gaps between the pulses. My first attempt would be a simple parallel ciruit with an additional diode to avoid a charge current flowing from the alternator back to the battery.
This may work perfectly and is worth an experiment. V1 is the alternator, the simulation is not very realistic, because its inductance is ignored here. If I add an inductor in series with V1, the simulator dies. 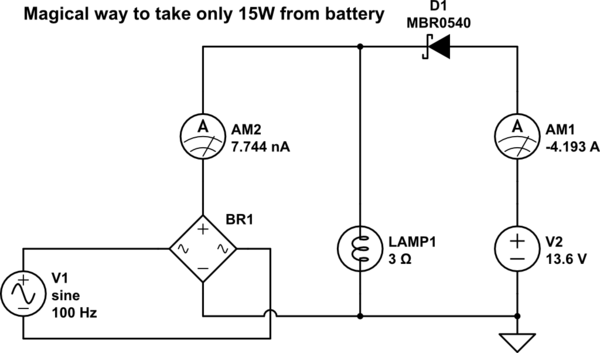 If the above is not sufficient, a true current limiter for the battery side is possible. This is not very efficient, the MOSFET M1 must dissipate 12 W worst case. The circuit limits the battery current to 1.2A during the gaps. During the peak current pulses from the alternator, the battery current drops to zero. So the average load on the battery is a bit lower than 15W. A lower value for R4 can allow more battery current, this can be adjusted in a real world circuit.

D2 is used as a cheap voltage reference and the voltage divider R4/R5 sets the target current for the battery.

A more efficient solution would involve a current limited SMPS stage, I will draw one, when I have some more time.

0
How to make two isolated power sources from one source?
4
Understanding Batteries and Loads
1
I2C Bus is Not Responsive When Engine Is Running. How to Diagnose and Fix?
1
Using a 120W inverter with a 180W brick
0
Selecting transformer voltage for lamp drawing 32W and 6.6A
0
powering a series LED with a battery