I'm an self-taught high schooler who's trying to understand how filtering capacitors work. I've searched and read multiple websites trying to understand how filtering works. At the point where I am, I've understood that the filtering capacitor, for instance placed after a diode bridge like in the figure below, can "straighten" the oscillatory motion of the voltage, thus effectively converting the current from AC to approximatively DC. The concept behind feels a little obscure yet. 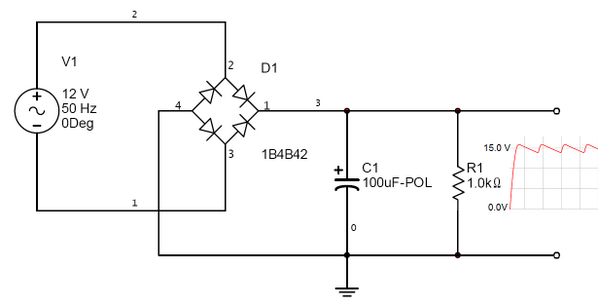 The better explanation I've managed to find doesn't include the diode bridge. It rather explains how the filtering capacitor works using just one diode (this is the source). According to the video I've included, the capacitor and the load resistance behave like a RC circuit in the descending trait of the V-t graph, but what about the case of a diode bridge? Is it analogous?

Moreover, searching on the internet I've stumbled upon the following formula used to calculate the capacity of the filter C for a particular ripple voltage:

(this is one of the sites I've read from). I don't like to be given just a formula without any explanation or derivation, and I can't quite figure out where this equation comes from on my own, can anyone help?

I've included a snapshot, of sorts, so that you can see what's happening better:

On the main diagram, I expanded out a rectangle and placed it over to the right side so that you might see a little more detail for the important area to consider.

The thinner dark blue curve is the voltage output from the full wave bridge rectifier, under load. You'll note here that the peak of this dark blue curve is less than the red curve (the AC power supply sine wave) by about two diode drops (worst case at their peak current.)

The diodes will engage when the dark blue curve crosses over the declining green curves. Clearly, this happens earlier in the light green case (heavier load) than it does in the dark green case (which is much lighter of a load.)

I've placed some vertical lines of appropriate color to show you where the diodes start conducting and stop conducting. You should note that the diodes are conducting for a longer time for the heavier load than for the lighter load.

You asked about ripple. Well, this is just what you see there. Both light and dark green curves stop rising upwards (while the diodes are conducting and charging up the capacitor) approximately right at the peak of the AC mains voltage. But if you look very carefully, you'll see that they don't stop conducting at the exact same angle. Just almost. But they most definitely start conducting at very different angles. Obviously, the heavier load drives its curve downward faster and so there's more ripple.

If all you want is a very simple equation that relates ripple, you would just ignore the width of the conduction angle and assume that it is zero in all cases. In effect, this says that the diodes "instantly" charge up the capacitor. That's not true. But it makes developing a formula easier. You'd also assume a straight line similar to the dark green curve (and not so similar to the light green curve.) Again, a simplification.

So putting all those factors together you do find that:

But of course it's not right. We've assumed that the entire period is spent discharging the capacitor into the load, which means we'll predict a higher ripple than would be real.

For light loads, where the conduction angle of the diodes is truly tiny and where the output voltage stays very close to the peak voltage (after accounting for the two diode drops at peak current), this isn't a bad estimate. And the load current is very easy to calculate from the load resistance in this case.

But for heavy loads, the actual discharging part of the cycle is significantly less than what's assumed above and so the dark blue line will catch up to it before it is able to sink still lower (as predicted above.) So the ripple will be less.

If you wanted to improve the equation, a first step would be to compute the conduction angle, somehow, and use it. Since this is only a first step, we'd still assume a straight line decay curve. But just look to see where it intersects.

Let's look at the same picture above, but with something added: 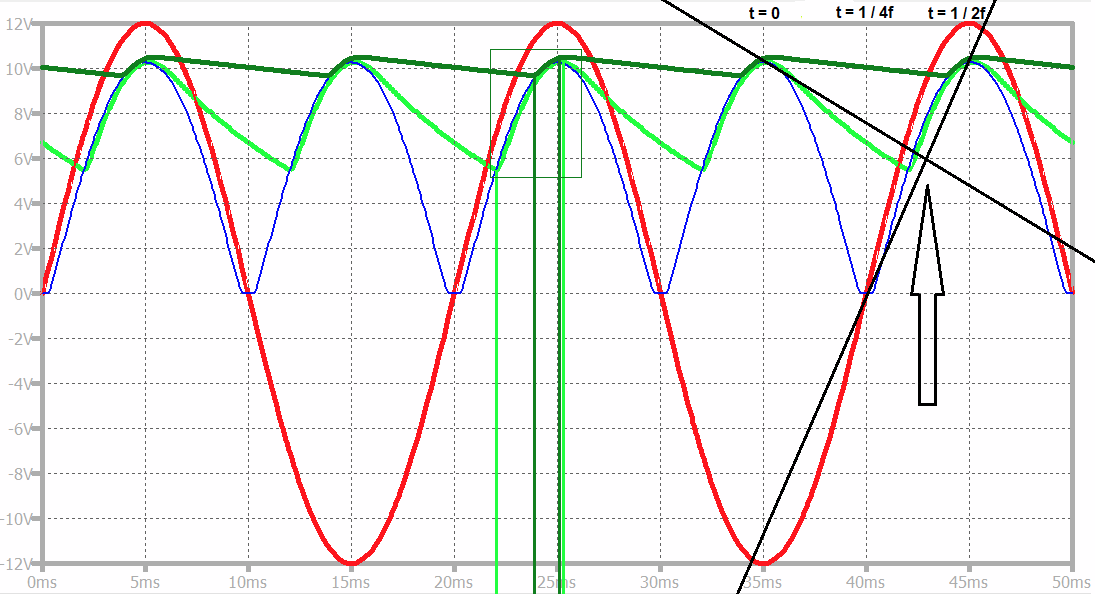 I've picked a later cycle to decorate. Note the two straight, black lines criss-crossing over each other and a big arrow pointing out the intersection of the two. The downward going slope is the voltage at the capacitor. I've assumed a straight line. In this case the load is treated to have an average of \$55\frac13\:\text{mA}\$ using a \$100\:\mu\text{F}\$ capacitor. (The current I had to estimate from the line slope I used in the graphics program.) The rising line is just an assumption to make so that we don't have to use sine functions. I decided to just assume that the sine is really a triangle wave. Close enough and it keeps the math less difficult.

You should try and work out the resulting equation on your own (I may add the development here at a later time.) But the resulting estimate is now (and we need an estimate for the peak voltage less the two diode drops, which I'll call \$V_\text{PB}\approx 10.3\:\text{V}\$ for peak-after-bridge):

The actual ripple in a case like this would be still less. But to figure that out we'd need to start using more accurate curves (the sine, for example, instead of a triangle wave assumption.) And the equations get worse, then.

The diodes themselves also vary in their voltage drop, versus the current in them. And they are highly non-linear (exponential/logarithmic) devices.

I think you can see why computing ripple too closely isn't done much. The simplest equation provides a number that is too large. But that means it bounds the ripple, so you know it won't be worse than that. If you are working with heavy loads that can tolerate lots of ripple magnitude, then the above additional step in the equation may make sense. But beyond that a simulator would almost certainly be used. And I don't know many who would even bother to go as far as I already did using a triangular wave assumption. Most power supply situations are designed for lower ripple and the simple equation is enough. In power audio amplifiers (some of them, anyway) they can tolerate a lot more ripple and it may be helpful to use an estimator equation that is a little more accurate, during initial design steps. But there aren't a lot of cases that can accept high ripple. So there's almost no need (from a design perspective) to bother with anything other than the simplest approach.

For a first order approximation, you assume that the capacitor charges for a tiny fraction of the cycle, and it discharges for almost the entire time.

If the current is constant, and \$\Delta v\$ is Vripple:

For a full-wave rectifier:

There are more accurate equations that account for the charging time.

"the filtering capacitor...after a diode bridge can...effectively convert the current from AC to approximatively DC."

The bridge rectifier takes an AC voltage and outputs a sort of pulsing DC waveform, as shown below.

You can think of the bulk capacitor then used for smoothing this voltage as a short-lived rechargeable battery.

When the bridge rectifier diodes are outputting a voltage higher than the capacitor's voltage, a current flows from them and the capacitor charges. When the bridge output voltage falls, the diodes don't conduct so they don't discharge the capacitor. This ignores the load, which will drain current from the regularly-topped-up capacitor and cause the voltage to fall.

Choosing the capacitor size and the supplied current through the bridge rectifier for a known load current leads to a known ripple voltage across the capacitor. The ripple is caused by the continual draining and later charging of the capacitor. 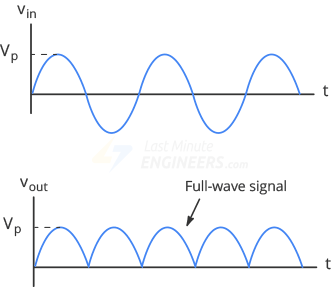 Consider the characteristic time constant for an RC circuit:

where \$R\$ is the resistance of the load connected to the output. Its value must be higher than the period of the ripple (the peaks at the output of the rectified+filtered voltage). Therefore, in terms of the frequency, we have (for the sake of clarity):

In a full-wave rectifier, the frequency will be twice the frequency of that from the input signal and thus a factor of 2 will appear later.

The ripple voltage \$V_{ripple}\$ and the current drawn by the load \$I_{load}\$ can be associated, according to Ohms Law as an effect of the load resistance \$R_{load}\$

plugging this into the last equation and solving for \$C\$, we have

On a final note, you must consider the Equivalent Series Resistance (ESR) can also play an important role on the ripple levels, mainly at high-frequency filtering, since this intrinsic resistance is seen by the load and can create a parallel circuit with it, increasing the ripple. This is the reason why special, low-ESR capacitors are used in switching supplies, like Tantalum, to reduce the amplitude of the output ripple.

A diode is a device that ideally conducts current into one direction only when anode voltage is higher than cathode. So it acts like valve that quickly allows the capacitor voltage to be charged by tracking the input waveform to sine wave peak voltage.

As the sine wave starts to fall, the diode is not turned on any more, so the capacitor that was fully charged startra releasing the charge to a load, so voltage drops slowly.

The formula you ask about is not an exact model what happens in a full bridge filter cap but a good first order approximation, a rule of thumb. It can be derived from the following equations for charges and capacitances:

And since T is period of peaks, they happen at twice per sine frequency in a full bridge rectifier,

Combining those, you get

For reference, I am too "lazy" applying some formulas I forget easily.
So, I check always with my favorite simulator I know since ever ...

Made with microcap v12, interactive mode.
Some measurements were added. Others can be.

1
How to calculate efficiency of a rectifier with a capacitor filter
0
Why do I get a different value for DC output?