I am trying to make a system that acts as a constant current/power load. At the time I am working with the power electronics, but I am having some trouble with the MOSFET in the circuit.

Below is a symplified schematic: 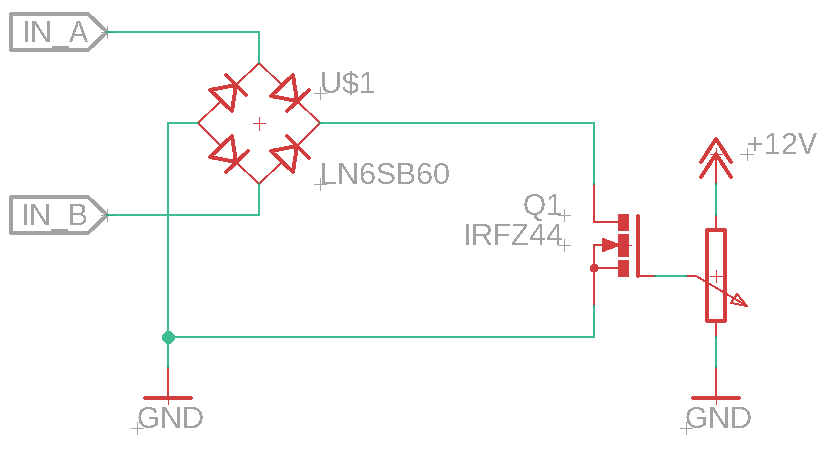 A power supply is connected to IN_A and IN_B, the input voltage needs to be rectified so the MOSFET's drain voltage is always higher than its source voltage.

This common ground connection is present in order for the MOSFET Vgs to get referenced to the common ground. This is done in order to fully turn on/ off the MOSFET with the 12V swing the potentiometer is capable of provide to the gate of the MOSFET.

The principle of operation of this circuit is that the current flowing through the MOSFET is proportional to the voltage on its gate. We can make an analogy that the MOSFET is acting as a variable resistor, which is actually true, because in order for the MOSFET to limit the current draw it changes the Rds parameter. With this in mind we can dissipate a lot of power in the MOSFET.

The problem I am facing now is that my MOSFETs keep blowing out when loaded. I have tryed several different MOSFETs with the same results. When loading the circuits I am using a 24V power supply with a 3A current limit. I have noticed that the circuit works fine with currents up to 2A with a MTP7N20 (Is-7A Vds-200V), but when I tried using an IRF540 or an IRFZ44 those blow up almost instantly.

I suspect that it has to do with a thermal dissipation issue mainly because niether Vgs_max or Vds_max was exceeded on any of the cases.

It is important to say that the MOSFET has a huge heatsink that is electrically isolated and also that is has a layer of thermal grease to help with heat transfer.

Power dissipation on the MOSFET will always be lower than the whole system dissipation because there is a voltage drop across two of the diodes of aproximately 1.4V, (0.7V per diode.)

There is no good datasheet for the MTP7N20, but here are the absolute maximums for the IRF540 and IRFZ44. 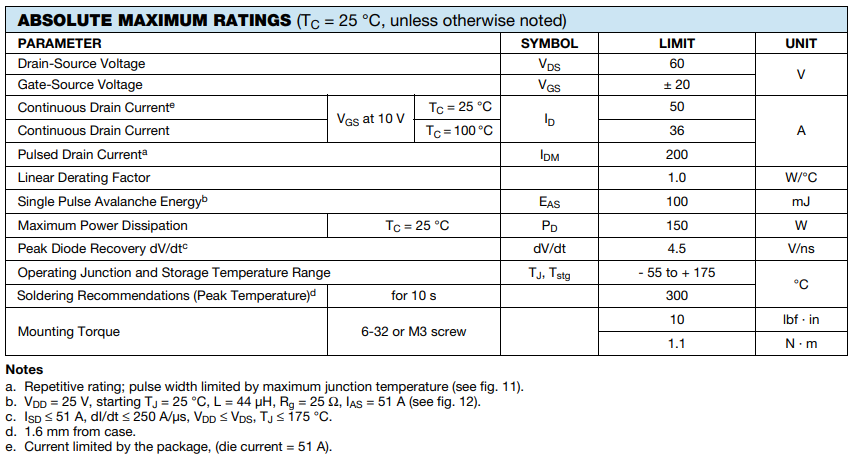 Notice that IRFZ44 has a maximum power dissipation of 150W and a continuous drain current of at least 36A (@100ºC.) 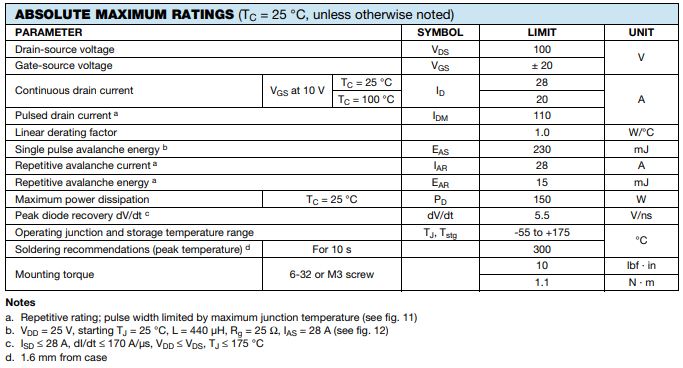 With 24V @3A power supply a maximum of 72W should be dissipated in the system. Hence I thought that the MOSFET won't get damaged.

Maybe I only need a bigger heatsink.

What kind of protection circuitry can I use in order to protect the MOSFET from blowing up?

I know that maybe I am over simplifing the driver circuit, but this should in theory work, right?

Please let me know what you think.

I know that maybe I am over simplifying the driver circuit, but this should in theory work, right?

Unfortunately not with an IRFZ44 (for example).

I have noticed that the circuit works fine with currents up to 2A with a MTP7N20 (Is-7A Vds-200V), but when I tried using an IRF540 or an IRFZ44 those used to blow up almost instantly.

Think about what happens when controlling the MOSFET drain current at around 2 amps: - 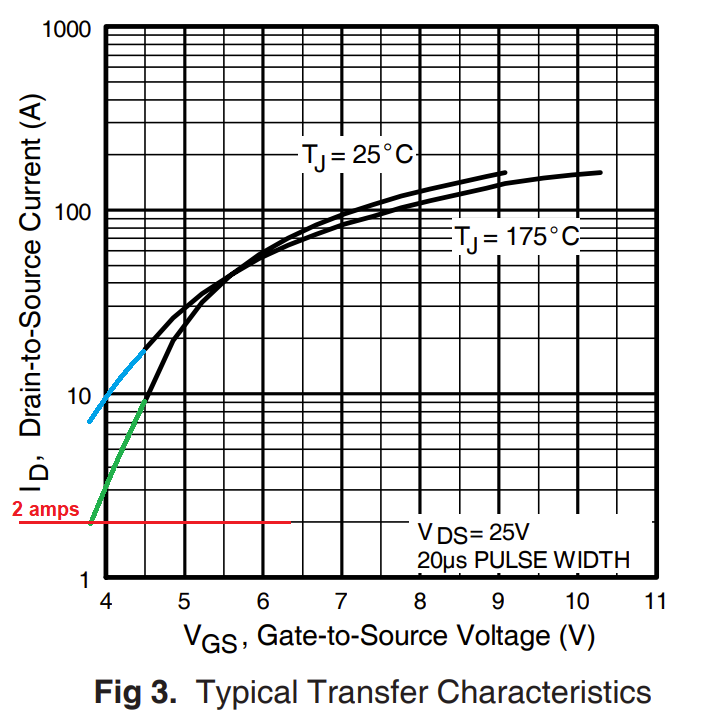 I've extended this graph in the IRFZ44 data sheet to demonstrate what I mean.

So, you apply about 3.9 volts between gate and source and, at an ambient of 25°C you initially get 2 amps flowing. Now the next bit I'm describing is in ultra-slow-motion because, in reality, it can happen in less than a millisecond.

Because modern power MOSFETs are built with several thousand tiny parallel MOSFETs (think HEXFET) just one of those tiny parallel internal MOSFETs will get hotter than the others and, will start warming immediately. It then takes more current (as it heads from the green curve to the blue curve above). It's starting to hog all the current and all the current is focussed on one tiny part of the die.

And, because the current only occupies a tiny area on the die, it warms very, very rapidly; its localized temperature shoots past 175°C and, as it does, it takes even more current until less than a millisecond later it's reached something like 600°C and you have a dead MOSFET.

No amount of heatsinking will prevent this either. It's over and done with before other parts of the MOSFET have begun to warm. Hence a heatsink doesn't help.

If you were trying to control a drain current of over 40 amps (with this device), you'd be operating in the area where it is thermally self-limiting and protecting. No such luck below 40 amps for this device. Choose your MOSFET carefully in linear applications where the MOSFET is expected to run in saturation.

I believe that you will have better success with a bipolar transistor. This is similar to a current sink in another one of my answers. Drive a coil with an Arduino 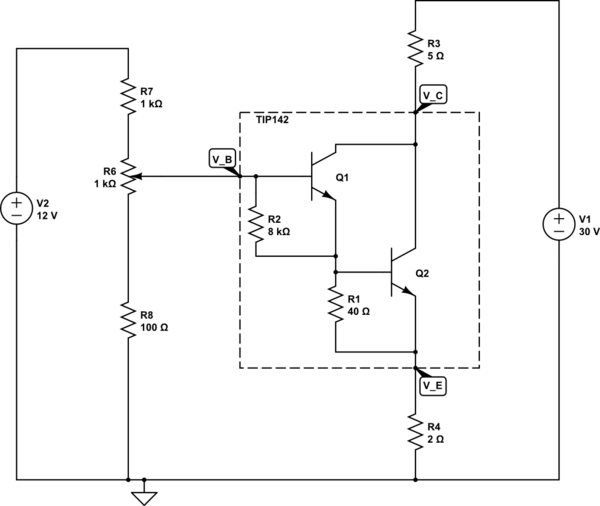 This plot varies V1 with the pot set at the midpoint. For the range where V_E is flat, the current is fairly constant (it will vary some with temperature due to the B-E junctions). 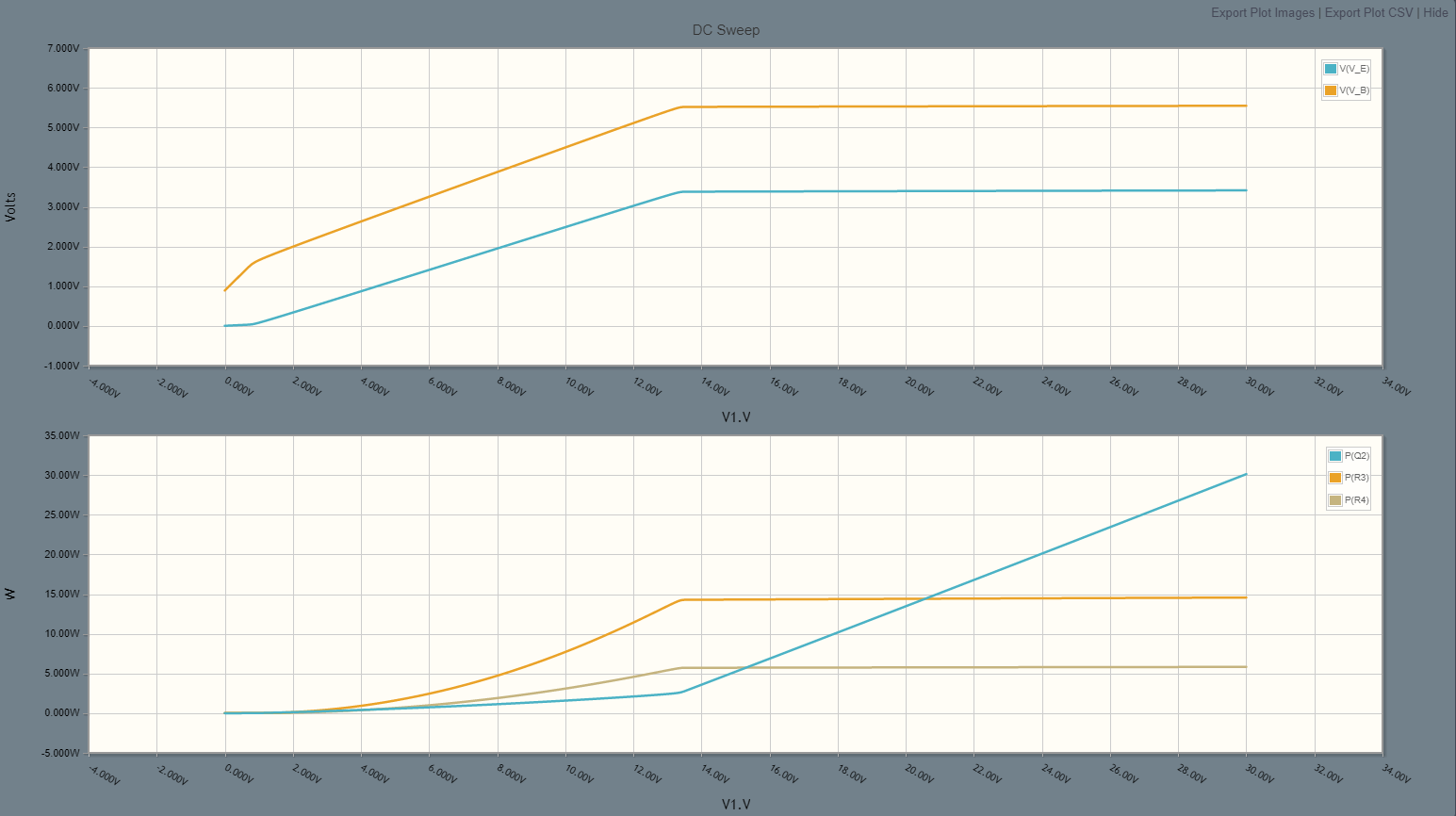 This plot varies the pot tap. 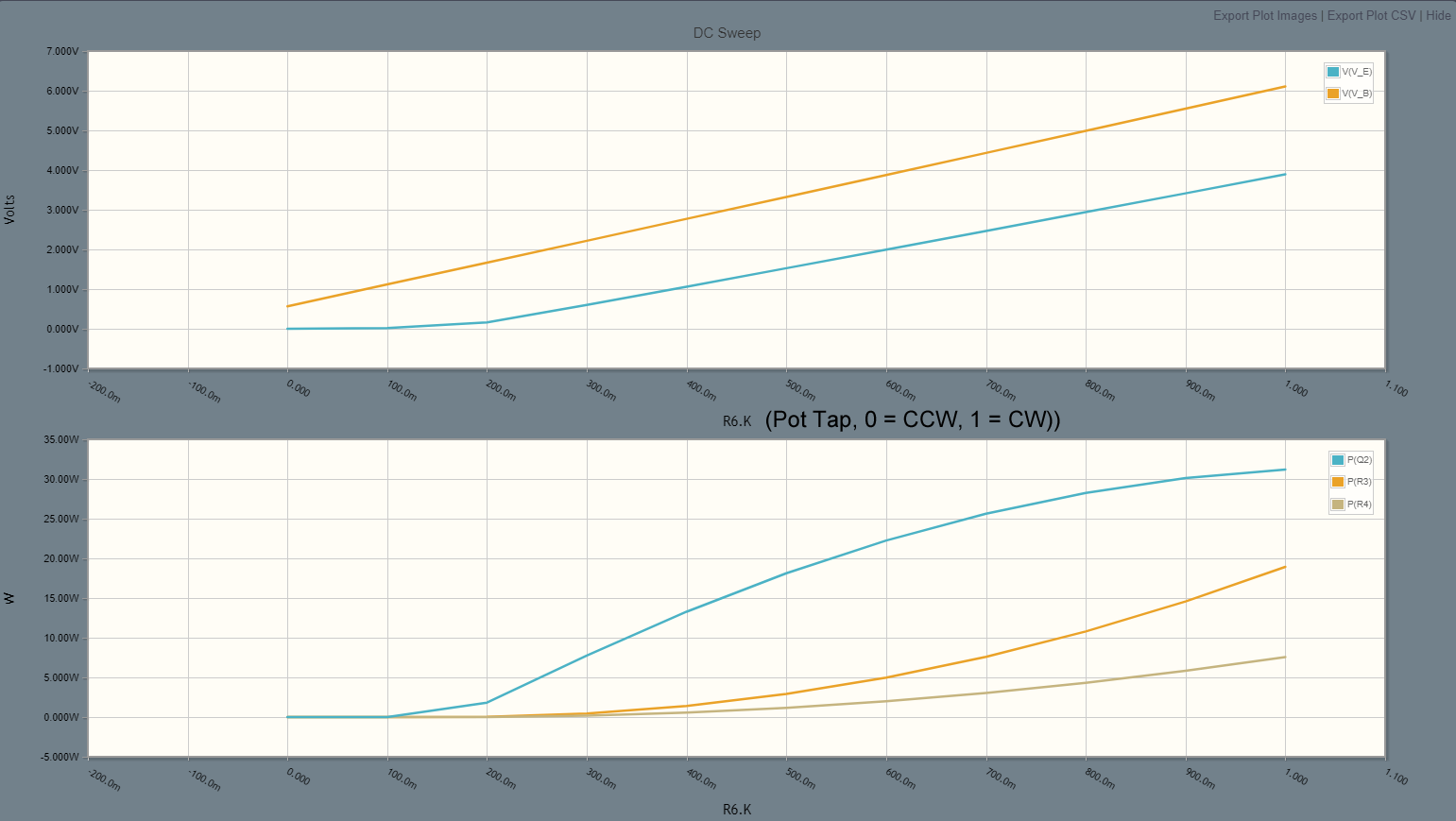 You can tinker with the values somewhat. But you want R4 to be an ohm or a few ohms for stability. Don't make R7 too small or you could blow out the transistor base when the pot is fully CW.

The easy thing to do is add a source resistor. This will help prevent thermal runaway. The more resistance the better. You could start with 1 ohm 10 watt. Now most cheap power MOSFETs are not well specified for linear operation. Lateral FETs are more expensive and hard to find and are good in linear mode. If you want to use standard fets then use lots of them in a series/parallel aggregate. Choose high voltage types because they have lower transconductance.

You will benefit from looking up the graph called FBSOA (forward bias safe operating area). You will discover that switching MOSFETs may be rated at 100 A and 100 W which sounds very rugged. But this is only the case at very low source-drain voltages.

SOA also applies to bipolar transistors but they are easier to find and possibly cheaper if you are only looking at 20 V and 2 A. Check out some data sheets; you will learn some valuable info with safe operating area graphs.

This characteristic is used when measuring junction to ??? parameters. If my memory is correct the MOSFET is placed in a given temperature (we used oil) bath and allowed to soak up the heat. The reverse voltage (very small current) is applied and the voltage drop is measured. This value is then used to to measure other parameters. This value is lot dependent and the measurement had be made to calibrate each new batch. Yes there was some small variations in a given batch but not enough to worry about. During the test the MOSFET is turned off, reverse voltage measured and power applied. This way you can get junction to ??? resistance measurements.

To make your circuit work you will need some external logic and some resistance so it can be controlled. Your circuit is also very prone to oscillations. Your simplest solution is to use a transistor, the MOSFET does not gain much and the additional current used to drive the transistor will be from the source so it is just part of the load.

4
Heat Dissipation Calculation for MOSFET
4
Burning a Power MOSFET
1
How many MOSFETs can a linear controller handle?
2
Drive a coil with an Arduino
1
Parallel MOSFETs in saturation/active region

2
Intrinsic Zener diode in MOSFET
0
MOSFET shorted after I connect them in parallel, what's wrong?
0
Mosfet Power Dissipation
1
Interpreting Maximum Power of a MOSFET from the datasheet
1
DC operation for IRFZ44 mosfet, SOA curve, max current at 40V?
1
MOSFET LDO, how does it work
1
My LED driver keeps blowing up when connected to a Lipo battery
4
Am I reading this MOSFET datasheet right?
0
All Mosfet terminals internally shorted in voltage controlled resistor