I am a bit confused by the response of this circuit given the input. For the positive part of the circle, the diode is reverse biased. As such, the circuit becomes 3 kΩ in series, with a 7 kΩ sticking out connected to ground (I hope you can see this). Why is there no current going through the 7 kΩ and thus no voltage?

I have attempted nodal analysis many times and get that middle point with the 3 connections to be 10/7 V, which is certainly not 0. Is there a way I can think about this to come to the realisation that the voltage in the middle must be zero? 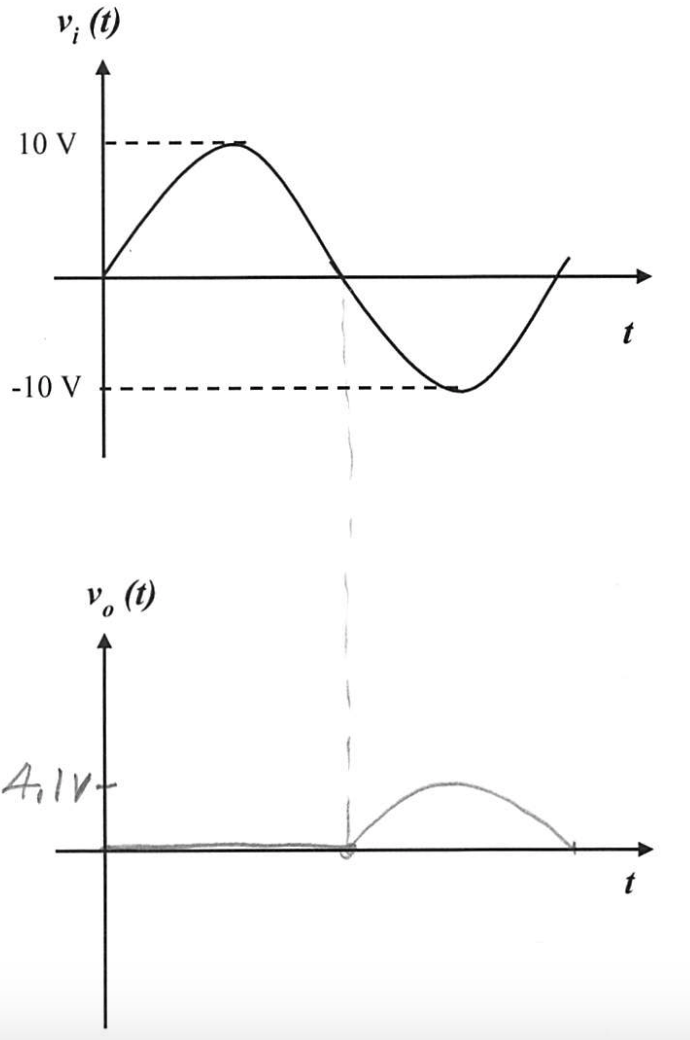 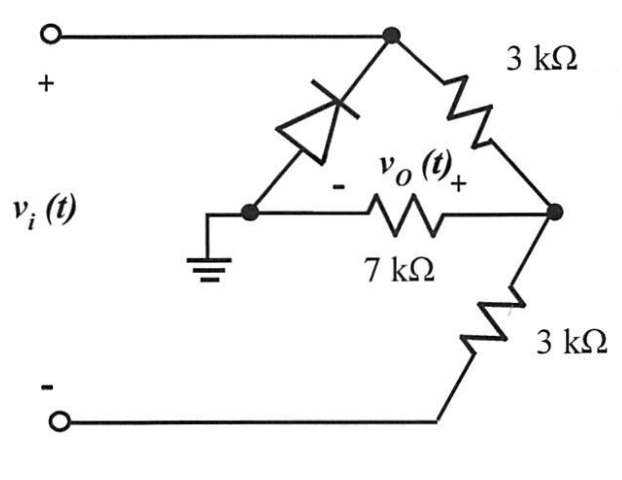 I'll try to explain at least some of Peter's point. Let's look at the circuit you have (I am going to redraw it, so be prepared to verify my work): 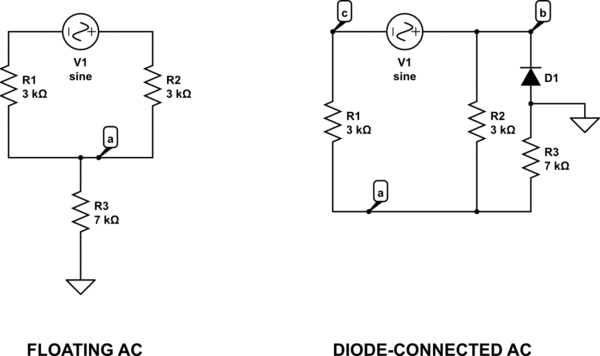 On the left, I removed the diode for a moment. Here, you can see that the AC supply is floating as Peter mentioned. Current will conduct through the loop that includes the AC supply and \$R_1\$ and \$R_2\$. But current cannot go through \$R_3\$ as there's no galvanic path available. So the only thing that \$R_3\$ does is to provide a weak tether at node a to the ground node (the voltage drop across \$R_3\$ is \$0\:\text{V}\$.)

On the right, I've added back the diode. You should be able to see that while there is still current driven through \$R_1\$ and \$R_2\$, as before, that there is now something new added to the scene. It's possible for current to now also occur in the branch that includes \$R_3\$ and \$D_1\$ during \$\frac12\$ of the AC cycle!

This means that for half of the AC cycle, when \$D_1\$ isn't conducting, the situation is just as before and there's no current in \$R_3\$ and therefore the voltage across \$R_3\$ is still \$0\:\text{V}\$. Just as in the left-hand side schematic without the diode.

(This particular kind of action of using a diode to tie some node close to ground for some part or all of a cycle is sometimes referred to as diode clamping or just as a so-called clamper.)

(If you want to dig a little deeper, \$V_{diode}\$ varies a bit with the current and we can work out that this current will be about \$500\:\mu\text{A}\$. So the diode voltage might be a tiny bit smaller and therefore the peak might be a tiny bit higher than just calculated. But that kind of thinking probably isn't needed here.)

So we should guess that for about half of the AC cycle the voltage will be \$0\:\text{V}\$ and that for most of the other half of the cycle (once the diode starts conducting) we should see what appears to be half of an AC cycle with a peak of about \$3.5\:\text{V}\$.

Ignore the Ground symbol. The Vi supply is floating relative to Ground so there will be no current flowing between the Vi supply and Ground.

1
Diode circuit simulation producing strange results
1
Question about thevenin circuit analysis with voltage across voltage source
1
Output of diode clamper circuit for a sinusoidal wave input
1
How to solve this diode circuit?
1
Diode circuit analysis solution
0
Diode capacitor circuit, what is the output across the diode?
0
Analysing diode and resistor circuit
2
Biased Clipper Circuit
0
Help me to understand the output signal of this circuit