Opposite of a transistor

So a NPN transistor has 3 legs. If you connect up leg 2 and take current away from it then current can cross over from leg 1 to 3. What I want is when you take away/give current to the central leg current cannot pass from 1 to 2 but can when no current is given/taken from the centre. Look at the schematic below to see what I would like to know exists. 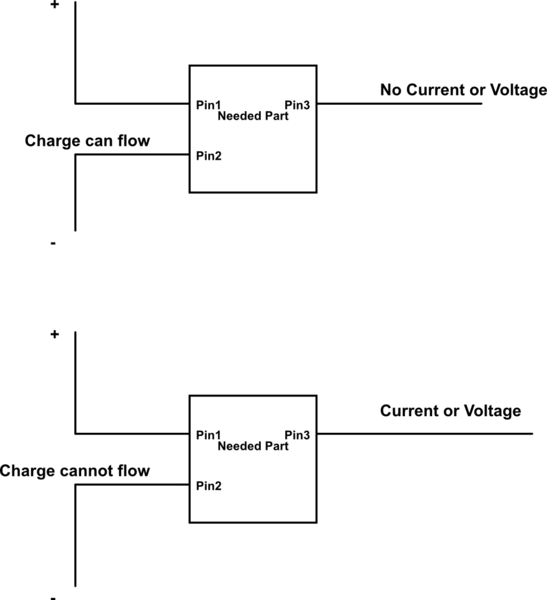 A J110 N channel JFET will do what you ask. Source, drain and gate are connected as shown: - 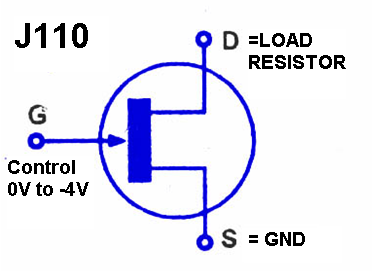 Source is ground, drain is a load resistor connected up to (say) 5V. Gate is the control pin and should be taken negative to source(0V) to turn off the transistor.

The J110 JFET has a Vgs(cut-off) of somewhere between -0.5V and -4.0V. This means that if gate is at 0V the device has good conductivity between drain and source and will pass current through the load resistor.

BUT if the gate is taken below the cut-off voltage the load current will fall to below 10nA (according to the Fairchild spec). J110 is just one JFET. It is closely related to J108 and J109 - these have different cut-off voltages to suit different applications.

I believe that what you're looking for may simply be a PNP transistor. Your specification is not very clear and you're conflating current and voltage, which isn't good.

An NPN transistor will conduct collector-emitter current as we raise the voltage on the base.

A PNP transistor (placed "upside down", so to speak, into the circuit, of course) will conduct collector-emitter current increasingly as we lower the voltage on the base.

In the schematic below, as we raise the voltage on input IN1 above around 0.6V, the NPN transistor starts to conduct. It cuts off below that voltage. But IN2 behaves differently. The PNP starts to conduct as we lower the voltage below \$V_{cc} - 0.6\$. It is cut off at higher voltages than that.

When a PNP is used in a positive-suply voltage circuit like this, a high input cuts off current, and a low input turns it on, opposite to the behavior of an NPN. 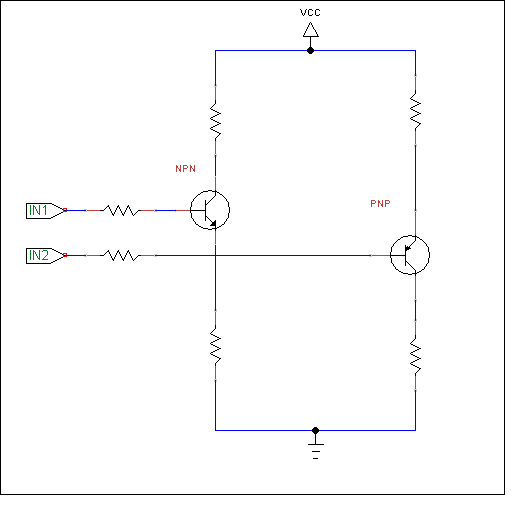 So, the current follows voltage in the NPN circuit, but is inverted in the PNP. That's current. Whether or not the output voltage is inverted depends on where you take it. If you take as your output the voltage on either collector resistor, then both transistors behave as inverting switches/amplifiers! That's because although the current control behavior is opposite between the two, the collector resistor also changes places between the two: it is on the top in the NPN circuit, but bottom in the PNP circuit. So it develops a \$V_{cc}\$ referenced voltage in the NPN on, but a ground-referenced voltage in the PNP one.

In other words, a common-collector circuit is always inverting, and an emitter-follower always noninverting, regardless of whether we build them using NPN or PNP, or whether we use a negative or positive voltage supply.

In addition, there are other kinds of transistors like Junction Field-Effect Transistors (JFETS) and MOSFET, which come in N-channel or P-channel varieties and can be "enhancement mode" or "depletion mode". If you know about all the transistor types, you can make a better informed choice about what will work well in your circuit.

12
Which resistor for NPN transistor base?
0
Why collector current is inwards to transistor in an NPN?
0
How to open and close PNP transistor with IO pin?
0
Pass transistor on boost topology
0
Hysteresis threshold changed when connecting a transistor to the output of a comparator LM393,
0
Weird behavior using Transistor
0
What transistor should I use? And how do I determine that?
1
Transistor weak current when switched from microcontroller