I've built a circuit which detects ambient audio through an electret microphone, amplifies the audio signal using a LM386 op amp (gain = 200), and then processes that audio information. The board is powered through a LM2623 boost converter, which ramps up a 3.7V LiPo battery to 5V for the power rails on the board.

The LM2623 (and, from what I understand, many boost converters) produces small oscillations on the 5V-GND rails - typically no more than 1% peak-peak. This wouldn't pose an issue at all, except that the audio signal my op amp is supposed to amplify is also very small.

I have 100 uF and 1 uF capacitors between 5V-GND before and after the converter, as well as near the op amp.

It seems that my op amp is amplifying the oscillations on the 5V-GND rails, thereby ruining my audio data. I've confirmed that it is indeed the oscillations because the oscillations and op amp output are in sync and have the same frequency. I am wondering how I can avoid this problem. Since the boost converter cannot get away from rippling the output, I would like to know how to prevent the op amp from picking up this noise, or if there is something more crucial I may be missing.

Yup, opamps will pick up some of the signal on their power and interpet that as input. This is exactly what the power supply rejection spec is there to quantify. A ideal opamp would have inifinite power supply reject, but actual opamps have rather less than that.

Even with the power supply rejection spec, you can't take it at face value. It is very rare that the freqency is specified, so assume it is at DC only. The active circuit in the opamp that allows it to be relatively immune to power signals only works over some frequency range. It may be less susceptible to power signals at high frequencies because the overall response of the opamp falls off with frequency, or it may be more susceptible because the active rejection circuit can't deal with the high frequencies as well.

In your case, put a ferrite chip inductor in series with the power lead to the opamp, followed by a substantial ceramic cap to ground. Something like a 1 µH or so chip inductor followed by 10 µF to ground is usually good enough. This will form a L-C filter that strongly attenuates the high frequencies. These chip inductors usually have a few 100 mΩ resistance, which forms a R-C filter with the capacitor that usually attenuates lower frequencies before the L-C kicks in. For really sensitive circuits, put two of these filters in series on each power feed.

If the circuit connections don't adhere to reasonable practise then no-amount of filtering will really help that much. Any connections between the microphone and the input of the amp must not share common points with supply rails. This means pin 2 MUST be directly connected to pin 4 and the bottom end of the pot must be connected to pin 4. Ditto the microphone. Feed 0V in to the right on the drawing below and star-point the pot, the mic and pin2 at pin4 - make one single connection to 0V. 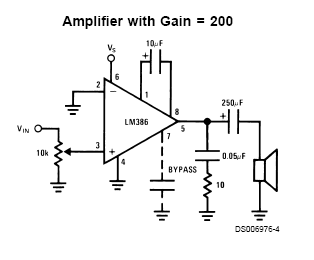 Going back to the circuit you have chosen - did you fit a capacitor on pin7 - very important that you do because that sets the PSU rejection capabilities of the device. Try a 47uF if you didn't else tell us what you fitted. 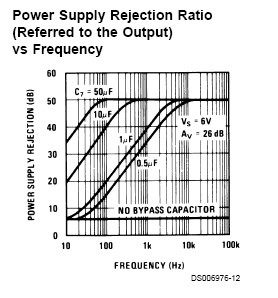 With no cap fitted the amp will reject PSU noise across the full range of frequencies it might handle at a miserly 6dB. In other words, if you have 1Vp-p on the rails, you'll get 0.5Vp-p on the output.

A word about the Switching PSU - it's a basic type and it cycle skips because of its simplicity - this produces a greater ripple voltage than one would normally expect. See below: - 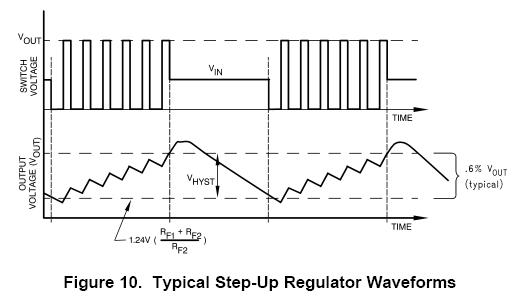 This can be much improved with a few simple mods to something like the level on the sawtooth on the rising and falling ramps, however, i'd be inclined to get it to produce +6V and have a low-drop-out linear regulator following it if you can't kill the noise.

One technique to improve the power supply ripple, at the expense of efficiency, is to go with a two-stage approach - fit a linear regulator to the output of the switching regulator. I've seen this approach on medical power supplies that need low harmonic content and low ripple on their DC outputs.

This technique (of course) requires the boost output to be higher than the minimum headroom that the linear regulator requires, but it gets rid of the large ripple generated by hysteretic regulation (described succintly by Andy aka) that a normal LC or purely capacitive filter would have a harder time dealing with.

If the boost converter were being loaded sufficiently to keep it running continuously, you'd most likely be able to make do with an LC filter stage between the opamp and the power supply rail as described by Olin.

Not the answer you're looking for? Browse other questions tagged operational-amplifier noise boost converter or ask your own question.

10
LM386 audio amplifier not amplifying
2
What actually is the output current of a boost conveter?
5
Rail-to-rail oscillations in subtractor op amp circuit
2
DC blocking capacitor in opamp feedback loop - does this count as the “signal path”?
9
Why do audio op amps require such high rail voltages?
7
Why does my electret microphone amplifying and filtering circuit output so much noise?
2
MP111 Op-Amp: Non-linear gain at low input voltages?
4
JFET stabilised wien bridge component ratios
0
How to calculate an op-amp's current usage based on datasheet's supply current and its Vout terminal?