I would appreciate some help solving the following circuit. I've been trying for a very long time and can't get the same answer the book has. I'm trying to get \$ V_o \$ in terms of \$ I_{os} \$.

My attempt is simply:

The answer is actually pretty simple :

Voltage difference between \$ V_+\$ and \$ V_-\$ is zero. No current flows into the opamps input. Output voltage is the sum of opamp input voltage and voltage across resistor R2. Also, output voltage is dependent on R1.

*NOTE: Ix is the current source between the two input pins. If your source is 0.5Ios, simply substitute the Ix with 0 5Ios. Thanks goes to Andy_aka who caught my nomenclature mistake.*

Let's draw a schematic for this concept. 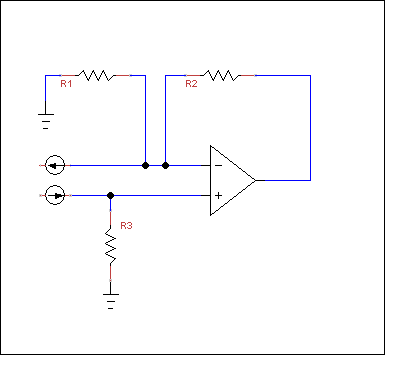 The current that drawn out of the mixing point at the - terminal is pumped into R3, but that is irrelevant and we can separate that by splitting the current source into two.

If the current sources are removed, the behavior of the circuit is very clear. The + terminal is grounded, no current flows across R1 because both ends are at 0V, and the output is 0V.

Next, we can think about happens if the two current sources are added one at a time.

R1 is relevant with regard to the displacement of the + terminal voltage. R1's top is pinned to ground, and so there is a current flow from its bottom which contributes to the flow across R2. If we remove R1, we remove that current and the output changes. R1 is not relevant to the effect of the top current source, because it is in parallel with it. That source adds a certain amount of current to R2, and therefore adds to the voltage drop, regardless of how much R2 current already comes from R1.

Not the answer you're looking for? Browse other questions tagged operational-amplifier math circuit-analysis or ask your own question.

4
Transfer functions with constant voltage sources in them?
3
Why can't you divide a series + parallel circuit into branches to get total current?
1
Op-Amp Circuit add/subtract voltages
0
Simple op amp circuit question
3
Diode and op amp exercise
6
Why can't I short circuit a virtual ground with ground in OP Amps?
1
OrCAD doesn't yields same result for this difference amplifier
4
how to solve this op-amp circuit?